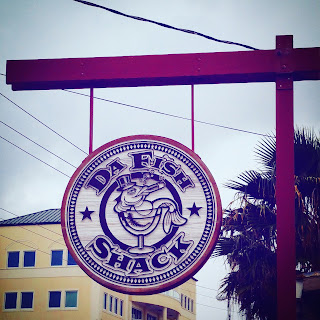 Another Grand Cayman review! I could get used to this. Fo realz! Maybe I should just move there. Fun fact: I was in Cayman for 13 days and I stopped counting the times that Rachie would whisper, in a very creepy way: 'You should move here'. If I could, you know, work from home, from Cayman, I would jump on that sh*t in 5 seconds. Imagine, instead of my view on the Mont Royal, which I must say ain't so shabby, well, it would be on the freaking Caribbean sea. Ya, I'm down. But before this happens.... Rach and I went for lunch at Da Fish Shack, located right smack downtown Georgetown. 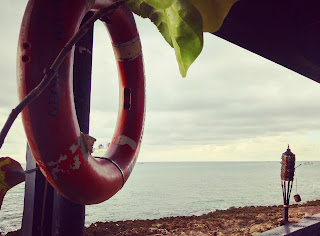 It looks like your run of the mill restaurant... you know... with a view on the freaking sea. Argh, it was so ugly. I can just hear Rach whispering the same thing in my ear. You enter the restaurant and there's a big bar and then there is the terrasse overlooking you know what (I'm writing this, waiting for my flight home in Miami, and I literally want to cry). There was a huge mother f*ckin fan that was very VERY loud, so we had some trouble hearing each other but at least we got to practice our lip reading. It was a tad grey yesterday, with intermittent showers, but this view is always breathtaking! 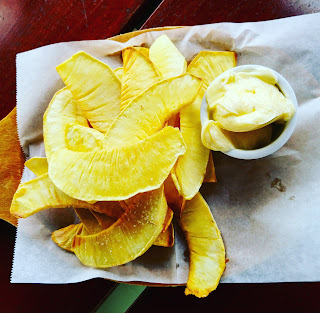 We started with some breadfruit. I had never ever EVA eaten this! It's so much fun eating new things, isn't it? That sounds like a trap parents used to use when we were young. Breadfruit is very akin to a potato, in flavour and also in texture and appearance. Basically, it's a god damn potato, yo! Our waitress gave us an enormous amount of butter (I don't think I use this much butter in a full year) to put on the breadfruit. It was nice and crispy and SLIGHTLY dipped in butter and a bit of salt, it was a feast! I'm totes ordering more of this when I go back! 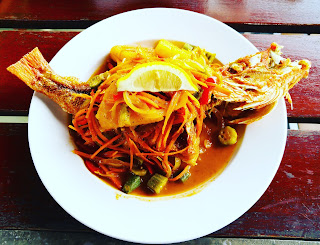 I ordered the Bammy Rundown. What is that, you ask? I had no effin clue before I ordered it. I actually wrote 'bambi' instead of 'bammy' on my phone. Bammy is a fried (because, when you can fry it, why not do it) Jamaican flatbread, made from yuca. It felt like I was eating polenta. It had absorbed all the yummy flavours of the broth and it was so easy to eat! Hello, calories! The snapper was fried and was looking at me with all its sharp teeth. Quite scary indeed! But man, that fish was gooood! Basically, it is cooked down with carrots, onions, okra and other veggies, so it literally was falling off the bone(s). I absoluely loved the okra, which we all know can be slimy if not cooked well. Mmmm, sliiiiime. Bah. You know me and textures! The veggies were cooked to perfection and oh so tasty. The broth was made with coconut milk, although it didn't taste like it. Rach told me that Caribbean cuisine uses a lot of coconut milk, but not necessarily for the flavour: her mom cooked rice and beans (yuuuuummy!) in coconut milk and we could detect it at all.  Anyhoot, this was a winner of a dish! AND it was cheap. Well, it was cheap in Cayman standards.

Service was great throughout the meal: we were greeted with a smile, seated right away and we got water and water refills in a timely manner. We also got our food quite quickly!

Do me a favour and go next time you're in Grand Cayman. You know, next time :)