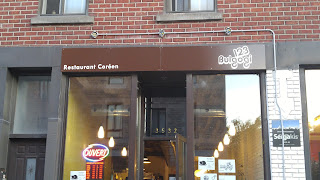 A couple weeks back, it was bbbbbb-eautiful outside so I spent the better part of my day with Gigi, playing with Maya, the dog she was babysitting. Well, dogsitting. Anyhoot, we walked on the canal, we went to the dog park, we drank some fine wine (thank you, one litre dep bottle!) and then we went out to get some take-out. We ended up going to 123 Bulgogi, this new-ish place on Notre-Dame. As you know, I am Asian at heart, so this was right up my alley! 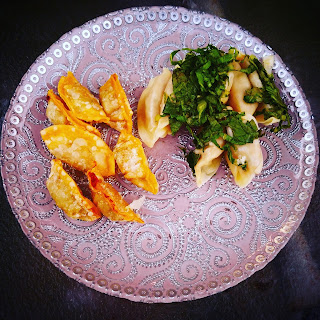 We had one order of fried dumplings and one order steamed. Hey, variety is key! The fried ones were very good but it felt like the stuffing was almost... not there. Kind of like looking for intelligence in Trump. OOOOoooh! DISS! Booya. BAM! I'm done. The steamed ones were perfect! Just the perfect amount of dough to stuffing ratio. Disclosure: my dumb*ss self did not even write down what kind of dumplings these were. I know they were vegetarian, and I know there was cabbage. AND I know I liked 'em! 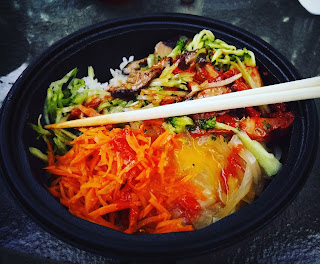 On top of dem dumplings, we had the bibimbap. I looooves me a good bibimbap!!! I would do a lot for a good one: I'll spare you the details! Sadly, this one was quite the disappointment :/ First of all, it was cold. And I'm sure it was cold even when they put it in the container. The veggies weren't pickled in any way, shape or form and there was no meat. The egg was no good, and even if it would've been, the rest was cold, so... a cold egg on cold rice is, again, no good! But you know what, the rice was good. Au moins!

6.5, only because of the dumplings

I shant go back for the bibimbap (can you tell?), but I might for those dumplings :) You never know when I'll get a craving for a dumpling OR a cravling. Damn it, that is a bad mix. You get it.

These seem so delicious! I love your reviews of the orders, and certainly anticipate trying these dishes in the future if I ever happen to travel. Thank you so much for the reviews.