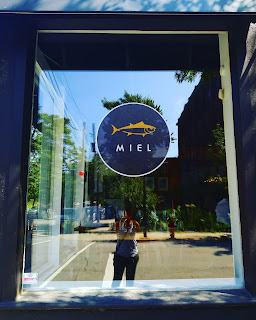 Another day, another meeting with friends. This time it was with ma boos from Sushi Taxi, Val and Mel. It's so sad when I'm almost forced to go eat at a restaurant. Ugh, I just hate it. You sense the sarcasm? You should. Peeps that personally know me KNOW I'm sarcastic 87% of the time. Miel had obviously been on my radar, it being a new restaurant AND in my neighborhood. Hello. 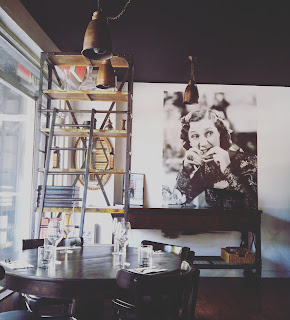 They fixed up the place in record time, in the span of a couple weeks. Chapeau. Cha. Peau. It looks really inviting and warm inside, with two separate rooms, lots of frames, dark tables, wood everywhere. It was super cuteness. 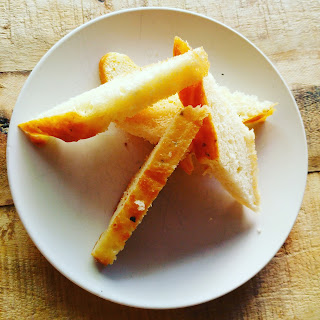 They brought us homemade focaccia first. Do you even realize how much I like homemade stuff? I like it because it means that a: they care about their products and b: they care about their clients. Oh, and it also means that they are competent. It's soooo easy to buy ready-made stuff and serve it on a plate! Way too easy. SO MANY restaurants do it. You don't even know. You know, because I know ALL their secrets. Ps: trust me, it's better if you don't know :p 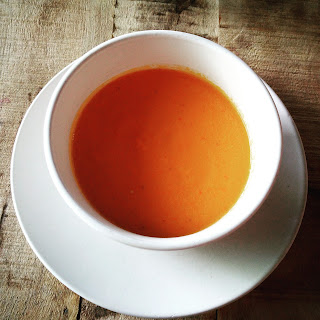 It was a table d'hôte so I started with the gazpacho. This is supposed to be cold tomato soup. With, perhaps, some peppers, cucumbers, garlic, what have you. If there were any tomatoes in there, then that's a surprise to me because all I tasted were peppers. It was a tad too much on the sour side for me, as well as the two other girls that tried it. 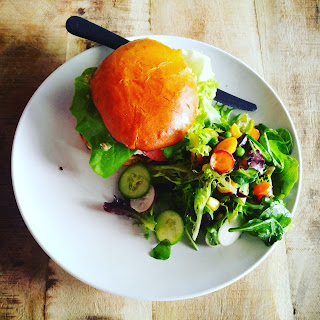 The lamb burger. A big meh for this. MEH. There you go. The meat was unfortunately dry and the bun was nothin' special. The harissa mayo wasn't... harissa-ed enough (it's a thing, yo) and the caramelized onions were few and far between. All in all, somewhat of a miss. On the other (very surprising) hand, the salad, which was the ever-dreaded mesclun, was uber fresh and crunchy and actually quite tasty. Y'all KNOW I ain't a fan of that sh*t, but this was actually nice. 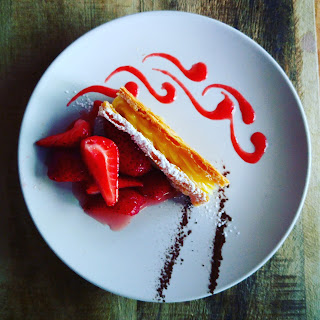 Dessert! We shared because the three of us were full BUT we are also little piggies, sooooo... That can only mean one thing! D-E-S-S-E-R-T!!! We had the feuilleté with strawberries and a lemon mousse. I'm not the biggest fan of fruity desserts (I mean come on, fruit is not a dessert!), but this one was nice and fresh. The lemon mousse was perfectly cold and the pate feuilletée was perfectly crunchy. One word: yummy!

Service was very professional throughout the meal. We got water in a timely manner and the waitress explained the menu very well to us. We also had the pleasure of meeting the owner because he knows Val, my ex boss. Ya, she cool like that.

Well, it's literally a 5 minute walk from my place and since restaurants are few and far between in Pointe St-Charles, there's a big possibility I'll be going back!

The burger looked so tempting in the picture, I was disappointed to read that it was meh. I love the presentation of the dessert. And yes, I too don't like fruity desserts.

Yes, but this fruity dessert was quite delicious!