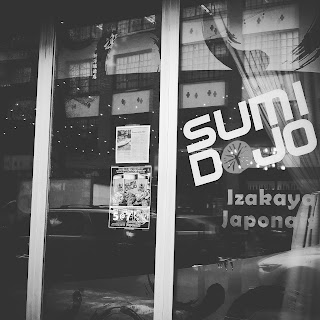 I'm continuing my Asian craziness!!! Might as well become an only Asian resto blogger at this point :) My Asian persuasion friend Jer wanted us to go to Sumi Dojo. He goes there for lunch sometimes and said I needed to try it. ALWAYS listen to Jer. Always. 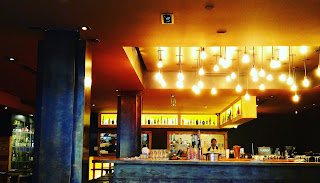 When you enter Sumi Dojo, it almost looks magical. I ain't talkin' unicorn magical, people! I'm talkin little child at Christmas magical. You know! Right? Little lights are dangling from the ceiling and at the (huge) bar, light bulbs of different lengths are also hanging right above it. The whole place is made of dark wood. And I do mean the WHOLE place: the floor, the bars, the stools, the walls...I absolutely loved the fact that there was some Asian music playing until Jer told me it was the equivalent of  Spice Girls in a steak house. Pfff... I still agree with the non-English music. Fo shizzle. 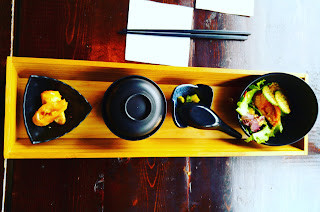 The appetizers! I mean, how freaking lovely does this look? You do always eat with your eyes (wow, mental image) first! This was so damn cute! So.... spring roll, miso soup, pickles and salad. Let's start with the spring roll: it was nothing special, really, but it was hot and pleasant in ma mouth. And I love things that go good in ma mouth. Don't get any ideas here. It had carrots and cabbage in there, it was pretty much exactly like the ones we used to sell at Sushi Taxi. Ah, the memories! The soup was hooooot! Duh. It wasn't too salty and the soft tofu just melted in my mouth, which was just loverly. LO-VER-LY. The salad was a: mesclun and b: wilted. Two EXTREMELY bad thangs in my book! The cucumbers were good and vinegar-y (it's a word!) and actually went nicely with the spring roll! Whaaaat? One bite of spring roll/1 cucumber was perfection. 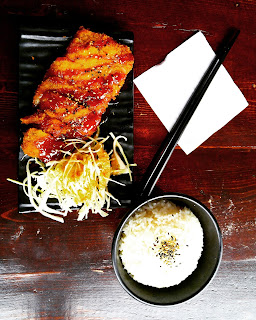 The main. Le pork. Or tonkatsu. The pork was moist and crispy. I'm not an uber fan of fried stuff but this was goo-hood. Jer says it's THE best in Montreal. What!!! The sauce on it was an Asian BBQ sauce (tonkatsu sauce), which can only mean good things. Asian? Good! BBQ? Goooood! Asian BBQ? Un -f*cking- believable! My Canadian self wanted a sh*t load more of sauce to dip my perfectly cooked rice in a pool of Asian BBQ sauce. Mmmmmm. There was shaved cabbage on the side which made me think, for a second, that I was eating all healthy and sh*t. It had a bit of vinegar and a touch of sesame oil on it which gave me that extra sesame taste that I LOVE. 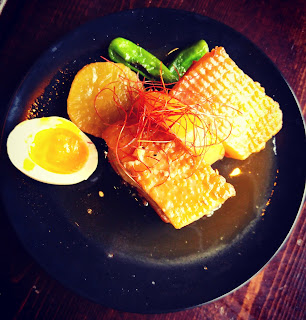 The pork belly. The daikon was packed with flavor it had absorbed in the cooking process. It basically acted like a sponge. A delicious sponge. The shishito, the bitter green pepper, is apparently the most hated vegetable by Japanese children. Kind of like North American kiddies and brussel sprouts. The pork was like a prison of flavor. Ya, I'm deep. So tender, it was breaking up just by looking at it. Totes true. The broth was very tasty and peppery and I would've drank (drunken?) it all. But I need to be somewhat sophisticated. I'm an esteemed food blogger, for God's sake. AND I have a damn business card! That's right. The egg was right on and the Korean chili threads (ito togarashi)added another texture and certainly another taste to the dish.

Service was alright. I know I'm annoying with this but at some point, we had no more water and my mouth was craving it. Our waiter did come back to answer a question we had about the Korean chili threads so that was nice of him.

Jer and I already have plans of going back for ramen. The ramen quest continues!