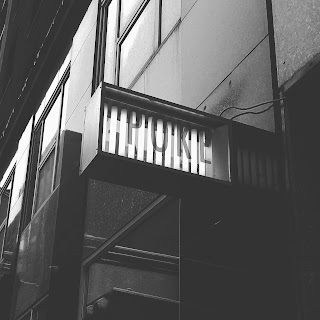 I've been waiting a while to eat here. Since before Christmas, Jer Bear and I had been meaning to go and try their poke. Poke is the new resto fad in town right now (as in NOW), just like tacos or meatballs or game (meat). I gottta say, I'm ok with game and tacos, but meatballs, come on! Come. On. Rant done. 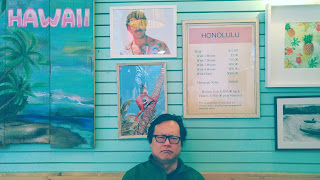 I met my Asian persuasion friend Jer(that's him, right there!) at Koa Lua on Union (they have one on Ste-Cat as well), THE new Hawaiian place for poke in Montreal. You just know I can be cool like that. Pfff, I've been to Hawaii, I know what they serve! That is a lie. My dad has been and I wrote a project on Hawaii in grade 4 with a big fat palm tree on the cover page. That is the extent of my knowledge on the most beautiful state in the... states. Mmmmyes. OK, let's get down to business before I start (continue) writing crazy things. 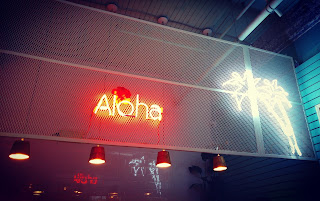 Koa Lua is a tiny, tiny, TINY place on Union. In, the summer, I'm sure it's fun and inviting and cool to stand up to eat or just bring it outside and eat on a bench in Phillip's square but in the winter, iz a whole other thing. I'd say the place has about 22 seats, only 8 of which look totally comfortable (the long table in the middle).  The place itself, although small, was emanating Hawaii! All the colours, the flowers, the palm trees... I almost thought, for a tiny little millisecond, that I had escaped the horrid (yes, horrid!) weather we are having right now. Can you tell I love winter? Ya.

Some Beach Boys (or something resembling them) music was playin' on the radio and everything was irie man. Wait. That's Jamaican. A'ole pilikia! This translates to 'no problem'! OK, enough with Hawaiian 101. I could've seen myself doing the hula in the summer, with a nice lei, but in the winter, with the slush and all-o-that, the place was a bit cold and lacking in space (for our large winter jackets). Don't get me wrong, it was totes cute: light blue dyed wood and festive and flowery cushions on the stools :) 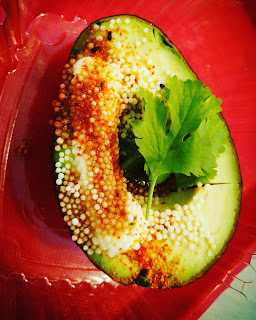 I started with the avocaloha! Lemme tell you somethin': I think I love avocado as much as I love shrimp. Wait. As Joey in Friends would say about girls and jam, 'put em' together!'. Yes, I totally agree. Nothin's good like a shrimp and avocado salad! But enough about my hopes and dreams. Perfectly ripe avocado (nuff' said), crunchy rice pearls, sweet honey sour cream, some masago to add some colour and coriander because HELLO! I found that it was an amazing little starter. The sour cream with that honey just went so well with the avocado and well, let's face it, the whole thing was gone in less than one minute. Jer bear had to pretty much steal a bite before I started biting him. 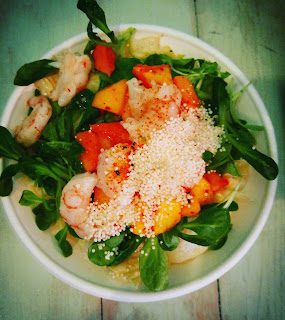 Poke! Or anti-poke? See, what happened here is that when I saw shrimp on the menu, I started to really want me some shrimp. Shrimp ain't poke. On top of that, to make it even LESS poke-like, I hadn't noticed, but it was served with mâche and freaking iceberg (existential question: which is worse? Iceberg or mesclun? One of the toughest questions of all time, I say!). Arrrghhh, my first poke experience has been ruined. Do you even realise what I've DONE? Ok, imma calm down. I kind of like mâche so that was aight, but I left most of the iceberg there. To rot. Forever! I NEED to calm down! The shrimp were perfect and tasty, the fruits were ripe and Hawaiian-y. Ya that's a thing. The guava vinaigrette was just present enough and added a nice sweetness to the dish.

Service was at the counter and very quick. Water was in pitchers and we could serve ourselves. All the people behind the counter were very nice and smily. I like it when people smile, it puts me in a good mood :)

Well, I have to go back now, don't I? I need to eat a real flinging flanging poke bowl!