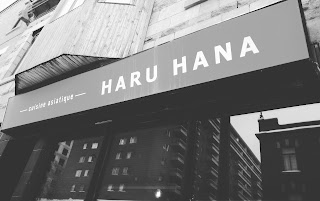 If you haven't noticed, I'm part Asian. OK, I'm not. But I swear my great great great great GREAT grand mother was half Asian. OK, that's a lie too. I'm sure I was Asian in another life. You know. My friend Jer from the real Asian persuasion said we should hit up Haru Hana, this Korean resto in the village. And when Jer says we should try a place, I'm always in. You hear that Jer, always. Cue creepy music. 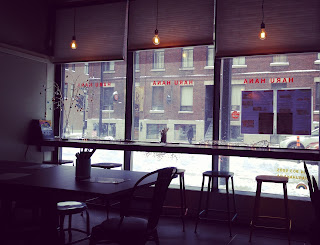 Haru Hana is a tiny restaurant on Maisonneuve right next to Berri Uqàm metro station. It's a good thing I had the address because I would have missed it fo shizzle. It's a very modest place, with two workers, a small counter, some shaky fake wooden tables that seated  around 23 and mix matched chairs. The menu was written on a black board on the wall although they also gave us the paper one. Hey, it's nice to have options. Every time someone would open the door, I'd brace myself for the cold because they didn't have that thang most Montreal (read: Québec. Nay, anything from here to the north pole) have when they don't have a second door. Somewhat of an indoor abris Tempo sorta thang. THAT was lacking. Brrrr. You know when you just can't warm up? That's how I felt. But enough about my body temperature.

They brought us hot water, which was nice considering it was -8000 outside (and inside :p). At some point during the meal I would have preferred some cold water though. Anyhoot, we were warmly (haha) welcomed by a very nice waitress/possible owner/possible cook. I'm somehwat of a creature of habit so I just had to have me the bibimbap. Jer also chose a little somethin' for us to eat before. I never question his decisions when it comes to Asian food. Well, except when he wants to order body parts and such. That's a no. I just can't do urine tasting(kidney) and/or cartilage. I just can't. 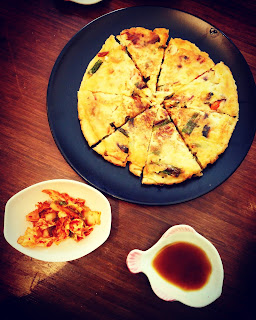 Pajeon: Korean savoury pancake with seafood and green onions. It was kind of crêpe-y, dough-y, egg-y, omelet-y. I really liked it but Jer said that usually, it is less dough-y and that this one was a tad undercooked. It should've been golden brown instead of light yellow. Listen to Jer. He knows. I really liked the onions in there and I could taste the mussels but the rest of the seafood was kind of lost on me. Just didn't taste it. The simple soya based sauce was lovely and I could have drank it all. But that's just not good table manners. I found it just fluffy enough and quite tasty! But Jer was right, it should've been cooked a bit more. 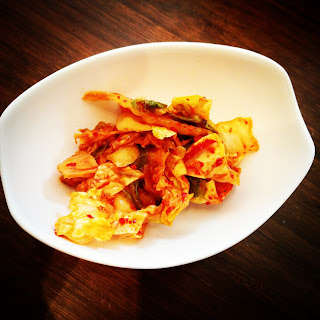 Ah, kimchi, my love. Last year, I made my own kimchi (cause I'm cool like that) and I have to toot my own horn here by saying that it was deeeee-licious!!! Well, obviously, this one was better, but gimme a break, it was my first try! This kimchi was amazing. It was fermented goodness! Just spicy enough, it went very well with every bite of my bibimbap! 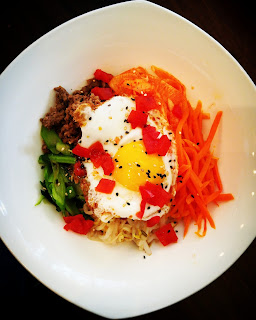 Le bibimbap. First thought was that they served it in a cold bowl. Oh no. No. It should always be served in a steaming hot bowl. I loved the pickled veggies, the egg was just cooked right for my taste, and the rice was also perfect. The red peppers, I didn't necessarily care for and the meat was a bit tasteless. Seasoning people, seasoning. All in all, I've had better bibimbaps.

Service was nice. As soon as I entered, I got water and menus. She also brought us a pitcher (of hot water...) and took down our order quite quickly. She did not check to see if we liked it and only asked at the end of our meal.

And now, the 악곡! Yes, that's score in Korean. Sheesh! (Hopefully, it's the right kinda score...)

Many more Asian restos in Montreal! You know where I'm going with this...