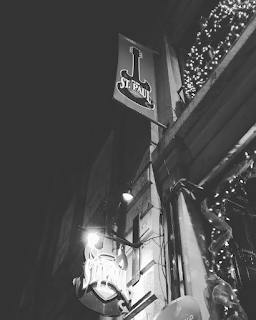 Disclaimer: I AM aware that the pics suck. I just couldn't transform them all and put everyone on Instagram through this.

I got invited to eat at Pub St-Paul right before Christmas. It was a nice little invite that explained precisely what was included in our free invite. Believe it or not, this is nice because I don't know how many times I got to a resto invitation and it was all confusing and baffling and complicated. And yes, I am aware that all those words mean pretty much the same damn thang.

I brought one of my faves, Daiz, and we waited. And waited some more. AND some more. Finally, the people that looked like the owners came to say that it was really busy with all the Christmas parties and what not and that we would be seated at the bar. Yay. And yes, if you are wondering, that IS sarcastic. 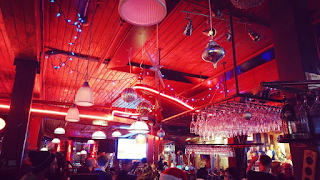 The place looks huge, with lots of televisions (it IS a sports bar after all) and screaming people everywhere. Still had a nice ambiance. I mean, let's face it, peeps be drinkin'. Everything seemed to be made of wood. I bet that even the toilet bowls were made of wood. Hahaha. Let's be serious here. There were pool tables, casino games and foosball. Un vrai bar, quoi!

We sat at the bar and for a good 5 minutes and nothing happened. Except the waitress just not talking to us. I'll hand it to her, she was uber busy. I get it. Duh. But, damn it, I got invited, serve me food. Please? On top of it, we were starving. And eating at that bar was not seeming very comfy. Argh. I hate not being comfortable when I eat, you know? Riiiight? Kinda felt like those old McDonalds with the super hard plastic seats that made you want to leave within 20 minutes of sitting down. Those.

We could get one drink FO free, so we both had a glass of wine. Basically, you have the house wine, that is, let's face it, made for sangria, and then you have the others. I usually don't like the house wine and Daiz either so we opted for a glass of white (for me) and red (for her). I'm not sure if they mixed it up or something but that wine tasted like no crap i've ever tasted before. I kid. But not really. 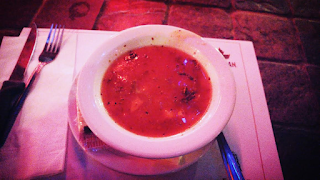 We ordered minestrone as a pre-entree. Remind me to never buy canned minestrone. Ya, it was canned. Canned soup. They gave us canned soup. Nuff' said. The only good thing about that soup was that it was hot. 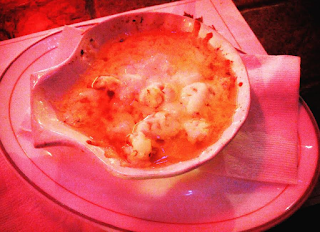 As an entree, I got the crevettes gratinées au fromage avec ail. Y'all know how I feel about shrimp; they are simply the loves of my life. And I do appreciate a nice garlic shrimp now and again. But this was overly garlicky and, if it's possible, overly cheesy. I mean, I could pull a string of cheese for a meter before it broke. Too cheesy. Oh, and I had bad breath for 8 days. I MAY be exaggerating. 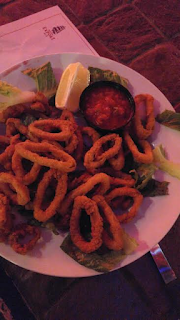 Daiz had the calamari. She was excited. It quickly faded. They tasted like they'd been deep fried 3 times and they were quite greasy. Also, they were cooked unevenly, which meant that some were good and some had the consistence of plastic. Mmmmm, plaaaaastic. And by the by, this was too bif for an appetizer. Cut it in half; there's your appetizer! 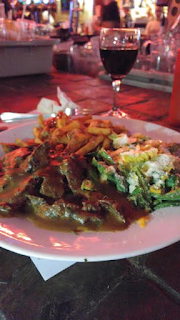 Daiz got the flank steak. And she'd been waiting for that flank steak. Her mouth was watering, people. And then, they bring out.... drum roll please...an uber thin filet of beef. You should've seen the disappointment on her face, poor little one. On top of it, when she ordered the steak, they actually asked her how she liked it. She said she liked it rare.  That piece of meat, as soon as it hit the pan, was over cooked because it was so thin. No such thing as rare here. There was a pepper sauce that was not as bad as anticipated but still had some chunks of I don't know what in there. Ugh. 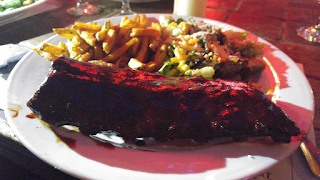 I had the ribs. Ah, ribs. I make a mean rack o' ribs. You know what, they kind of saved the night. The sauce was too thick and too sweet for my taste but they were better than anything I had tasted in the evening. The ribs could have stood a bit more time in the oven to make them more tender. The caesar salad was too cheesy and the croutons were too hard. The fries were not bad but could have been a tad crispier. To be honest, I didn't even finish my ribs. That's how awesome the food was. And YES, I'm being sarcastic. 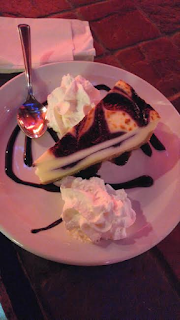 Dessert! It was bound to save the day! I believe they had three or four choices. One was  pudding chomeur... so... no. Daiz had the VERY store-bought (I'm talkin' grocery store here) cheese cake. It was OK. Not good, not narsty. The whipped cream saved the day. Let's face it, whipped cream always does. It was a very dense cake that could have broken a brick if thrown correctly. I swear. 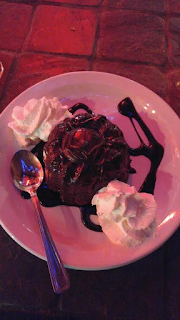 I ordered the fondant mainly because I hadn't had one since my Juliette et Chocolat days. Aaaaaaand, nothing was fondant. Nothin'. The supposed melting part in the middle was just hard chocolate. Argh. Take the extra couple minutes and melt the damn thing.

Service was below par all evening. We sat and we waited. And then, we waited some more for the waitress/bartender who was right in front, to notice us. It took her a while to find the drinks menu and even longer to find the food menu. Hey, it's a good thing I'm on Tinder because at least we could look at the choice of ladies in Montreal while waiting for our 'food' to come out. Tinder: you might find the girl of dreams while waiting an eternity for your food. That's a bad slogan. Hey, I'm on flu meds and feeling woozy. Don't judge me. Our water was barely refilled throughout the evening and although I totes understood the fact that they were really busy, I feel like the girl was not doing such a great job. Oh, and I should've been advised that there were going to be a sh*t load of Christmas parties because we would have picked another evening. I felt so bad: when we were leaving, the owner said he was sorry it was so busy and how did we enjoy the food. Yish.