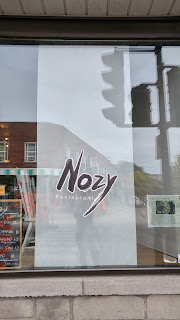 Since before I can remember (I have a very bad memory), I've wanted to eat brunch at Nozy. I went with Lea a couple months back to have their omakase menu (about 7 or 8 dishes, chef's choice) and had been pleasantly surprised. Well, baby gurl (yes, I call MYSELF that too) was back. With a vengeance! OK, I do NOT know what that entails. 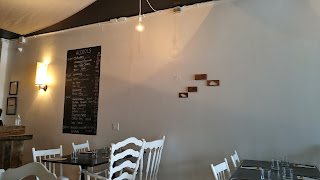 For the restaurant itself and the décor and what have yous, por favor go read my first blog post on Nozy: http://www.eatingoutmontreal.com/2016/07/nozy.html

Aight, so, I was there with Jer, Lea and Bridgert, all fans of the Asian persuasion. Who isn't, am I right? I've said it before, and I'll say it again, I'm convinced I was Asian in another life. Totes fosho. And by that, I mean foshizzle my nizzle. And by THAT, I mean imma gonna stop talking. The end.

I had seen pics of Nozy's brunch on facebook and since then, I had been drooling uncontrollably. I look weird when I drool. I try not to do it often. 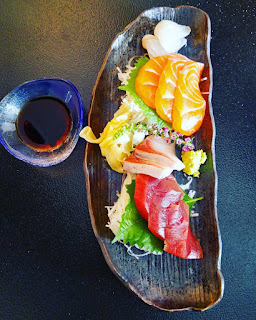 Sashimi X 4. So what if I KIND of forced Jer bear to share this with me. He got LOTS of thai basil from my garden in exchange :) I think that's a fair trade. Aight, so we got tuna, yellow fin tuna, salmon and snapper. OR the best damn sashimi anyone has ever had. The presentation was oh-so-pretty: beautiful plate with some shiso leaves and some very fine daikon. This shizzle was super fresh. Nay, it was uber fresh. The yellow fin basically melted in my mouth and the snapper was like fish candy. That dson't sound good. Let me rephrase: it was one of the best pieces of fish to ever hit my palate. It was very tasty and had a great sweet side to it. The tuna and salmon were also awesome but the two other pieces of fish were the stars of the plate. OH, did I forget to mention that it was REAL wasabi? Fo realz! Man, that stuff is so rare, they must sell it on the black market or some sh*t. Well, it makes all the difference in my book. 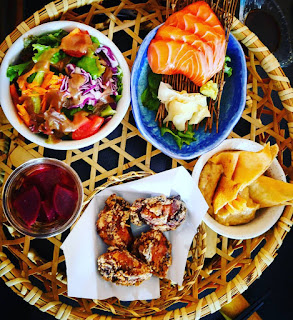 Take Kago or 5 appetizers. If you can't decided what the f to eat, I suggest ordering this bad boy. I mean, how pretty is this? I'd say 13 on a scale of 1 to hells yes. We got marinated beets, a house salad, salmon sashimi, eggplant dip with wonton chips and karaage. OK, first off, I could've done without the salad. When I get a salad like this one in a restaurant, I feel a bit cheated. And that's all I'll say about that. The beets were actually really nice: not too sweet and not too acidic. And I loves me some good beets so it was right up my alley (you know, that beet alley!). The chicken, forget about it. Just forgeeeeeeeeeet about it. Hands down, way down, one of the best karaage I've eaten, ever. Jer took a bite and looked at me with a face that said 'dsamn', or 'wow'. I couldn't quite make it out. When something is both crunchy AND moist, I give them 8 thumbs up. Iz a good thing we were four. The spices were subtle but still present and, well, it was, wait for it, you know it's comin'.... heaven in my mouth! I should totes have a copyright on that phrase.

OH! Don't forget that every dish comes with one of the most marvellously misoed soup.

Service was good throughout. We got water and then we got more water and then... you get the point! She explained the specials ..twice! Hey, we are not the easiest gang of eater outers. Ya, it's a thang. All in all, good service.

Well, of course I'm going back. Why? Because Nozy is surprise after tasty surprise!