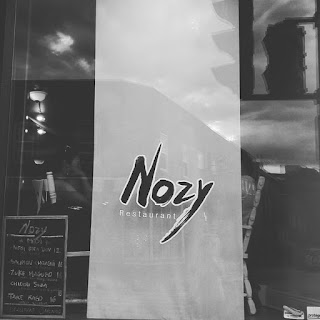 I go to restaurants a lot. Like, a LOT! With this blog and all, I feel like it's a second (unpaid) job. That I love. I usually try to go to budget friendly restos, but once in a blue moon, I wanna splurge. Splurging is good. It cleanses the soul. Or some shit. 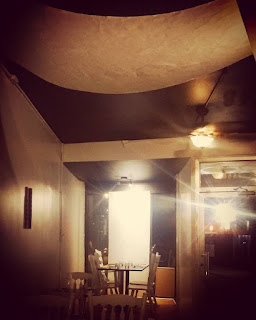 Nozy had been on my radar for a little while so when Lea mentioned we should hit it up, I was totes down. BTW, for those of you wondering why it's called 'Nozy', it is for chef Nozomu Takeuchi. The restaurant is quite small with about 30 seats, and mostly everything is white. I kinda liked it, it looked very pure. White walls, white chairs and white pieces of cloth hanging from the ceiling made for a nice and calm ambiance. As a contrast, the tables were black and there were tiny wooden things hanging on the walls that kind of looked like pasta portioners.
There were seats at the bar and a table located at the front of the restaurant that made for such a cute little nook. Jazz music was quietly playing, and at some point, it totally became awesome with some old 90's Janet Jackson! Hahaha! Weird, but awesome. 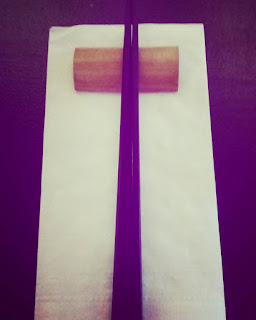 As per usual, I knew what I was having: the Omakase menu: a series of dishes selected by the chef. According to the internet (the whole internet, yes!), it was about 6 courses. We told the waitress we wanted it to be a surprise. On their FB page (side note: I'm not uber fond of the fact that many restaurants now don't have actual websites, only FB pages), it said that it was 50$ but when we got there, we noticed that it was 60$. OK, not a huge difference, but a difference nonetheless. I still had to go for it though. And Lea followed suit. Just a little note here: the drinks could be more original. I mean, litchi martini, cucumber cooler, bloody caesar? Been there, done that. 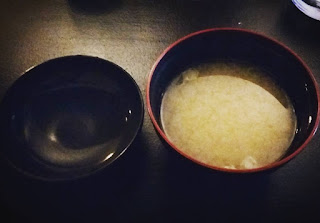 Miso soup. A nice little starter in any Japanese restaurant. This costs about minus 5$ to make. Seriously. It was good and simple and effin hot. I think I burnt my tongue to the second degree with this bad boy. Of course, Lea waited until it wasn't as hot. Wise girl. 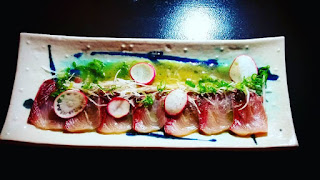 The appetizer. It looked just beautiful and very colourful. I love colours on my plate. It makes me want to eat it more (the dish, not the plate!).  Fresh snapper sashimi. Get IN ma mouth! Now. It had finely shaved dikon, radish and ponzu sauce, which, for anyone interested, is a citrus-based sauce. Not a seafood based sauce like the waitress informed us. Citrus. Her brain may have made a wrong connection like ponzu-citrus-seafood... or something :) There was a hint of sesame oil in there, which was a bit too heavy for such a light dish. The ponzu was nice but there was a missing element, like salt perhaps. The fish was awesomely fresh though and absolutely and irrevocably melted in my mouth. 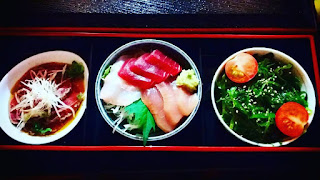 Our waitress then arrived with 2 rectangular boxes, one on top of the other. I found that really cool. She placed them one in front of the other and opened the first one. A+ for presentation. My first thought was 'f*ck, I should've told them I am not a fan of wakame'. Shizzle. I just really am not fond of that texture. The taste is OK, but the texture is not. I know a lot of people like it. I am not one of those peeps. Anyway, I'm a good [food] sport, so I tasted it and apart from that stoopid texture, I can tell you for sure that this was one of the best wakame around. You know, around. It had a lovely sesame taste and wasn't as hard to chew than others (I REALLY have a problem with weird textures, I do realize this!).
In the middle, a trio of three sashimi: snapper, red tuna and white tuna or hamachi as it should also be called. All super duper uber fresh. I'm pretty sure they were caught out at sea about one hour before our arrival. It's possible, right? Right? They all just pretty much dissolved when they hit my tongue. Man, that was fresh fish. This may just have been THE freshest and best sashimi I've ever eva tasted. The white tuna was my favourite. Perhaps because i rarely have any. F*ck me that was good. I'm sorry about the cursing but this deserves it :) It was accompanied  by fresh wasabi from the freaking root. The rooooot! This is a very rare occurrence. And one I oh so appreciated. It was hot as all hell but a little bit on each piece of sashimi made it even better! Right under, there was a nice little not overly dressed salad with a great big shiso leaf. Mmmmmmshisooooo. If I'd be a Kung Fu master, my name would totes be Shiso. Oh wait, I just stole that from Kung Fu Panda, didn't I?

In the third bowl, beef tataki in ponzu sauce + secret ingredients. I like secret ingredients. It was so tasty, again with the raw meat just melting away on my palate. I thought that the use of ponzu was good here, but that it was a bit of a repeat from the appetizer and lacked seasoning.
Second box! This is exciting! Lets start on the right with the karaage chicken. I've had karaage before. Many a times, it can be dry and many a times it can have an amount of fat on there that is... unflattering AND many a times, it lacks in spices. Well, this one was purrrrfect. No, it's not a cat people, it's chicken. I'm getting off track here. First of all, usually (OK, MY 'usually'), you have white meat in there. This was brown meat. Much much moistier. Is that a word? I think SO. The spices were a mix of ginger, garlic and hot pepper. A winning team, I'd like to say. With a bit of soya sauce, that chicken won every chicken contest. Crunchy, moist, spiced just right, seasoned correctly.

In the middle, mashed potatoes with pork. I like to say that it was a cloud of heaven, those potatoes. Wow! So soft, I think they put it through a fine sieve about 8 times. The dish kind of looked very Christmasy to me. Not Japanese. Christmas. Japanese Christmas? Anyway, the braised (I presume for many hours) pork needed no cutting because it broke down as soon as I touched it. So damn good. A bite of potato mousse + pork transported me back to, you guessed it, Christmas! i don't even know why. It was really tasty and well executed but I don't know how well it fit in with the other dishes.

Miso marinated salmon. Miso? Yes. Salmon? Yes. Put em' together man! The salmon was so tender and it was oozing miso. Yes, oozing. Just by looking at it, it was flaking off. Is that a thing? Anyway, it was simple, yet very tasty. Just like most things should be. 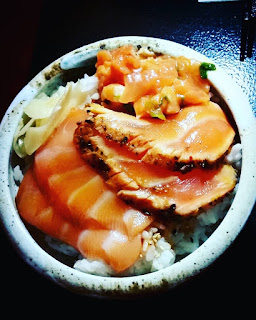 Salmon X 3. Salmon tataki, salmon sashimi and salmon tartare. On rice. Although the rice was perfectly cooked to perfection (did I say that twice?), I don't know how I feel about eating cold fish atop hot rice. I'm not sure I'm fond of it. It feels weird to me for some reason. The tartare had a miso and tomato sauce and was really spot on. The naked sashimi (hihi, naked) was as on the ball and as fresh as the ones we had in the first place and the tataki was tatakied (new verb guys!--put it in yo dictionary) with nanami, an Asian spice that is akin to chili powder but with sesame seeds and other spices in there. Iz hot yo. AND good. AND smoky. But again, it felt funny to eat warm tartare. No?

After that, we really debated whether or not we should have dessert. After the waitress told us that the ice cream that was part of one of them was not homemade, I lost my dessert erection.

Service was great throughout our meal. Our dishes were quick to arrive and our waitress answered my 600 questions. She knew I was writing an article (I never say it but this time, I asked her to explain our dishes 'slowly, so I could write it down') so I'm not sure if we got special treatment or not. Anyhoot, water was on the table right away and we could just serve ourselves which was nice. She was very attentive and checked many times throughout our meal to see if we were satisfied.

And now, the moment you've all been waiting for: the scores!

Will I go back you ask? Hells yes. I've already started putting money aside for it. True thang.
Posted by Marie at 3:33 PM

As always, your articles are fun and quite helpful! I'm happy that you're keeping this blog going, great job!! - Serge C.

Thanks dude, that means a lot!