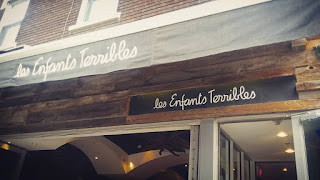 I went to Les Enfants Terribles about a long time ago (i.e: I don't remember) with my aunt and my memory of it was that it was great food, well executed, in a very loud dining room. The dining room hasn't changed (as if my very loud dad had multiplied himself), but this time, we sat outside on their patio. My sista from another motha, Mona, was in town on a layover (she's fancy like that) and Tacha, another high school girl, works right in front of this resto. 1 + 1= let's meet there!
The place is pretty big with quite the dining room and bar inside and a nice big patio on the side of the restaurant. The vibe is happenin' and this is where you'll find most cool Outremont people. OK, I don't really know what those look like.
As soon as we sat down, we had water and a menu. 2.5 seconds later, we were asked if we were ready to order. Sheesh, calm down woman! Well, while we were deciding, we just had to think it over a lunch time drink! Duh. Mojito, hello. 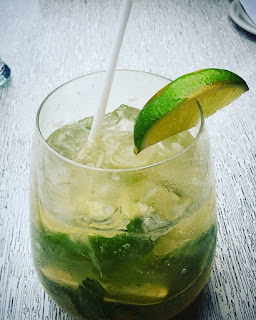 Well, it was diddely-damn perfect. except the brown on that lime. Come on people. As a restaurant worker meself, and someone that orders for my restaurant, I understand that, right now, limes aren't top shape. They either arrive half brown or get like that in a day or two. 'Tis life. But you know, use those narsty limes for the juice and the nice ones for deco! Sheesh, must I teach everyone everything? Anyhoot, enough about ugly limes. This was a real mojito. Like, a real one, you know? Like a how-did-I-get-to-Cuba-so-fast mojito. The bubbles were right, the sugar was right, the lime was right and the mint was right. Just. Plain. Right. I'd treck up to Outremont right now for one of those bad boys. 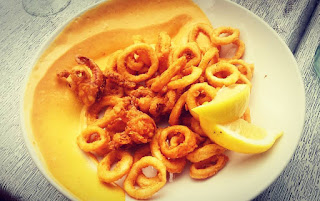 I was sharing calamari as an appetizer with Mona. Calamari is very easy to f*ck up. Cooked too little: f*cked. Cooked too long: f*cked. Well, these...were... perfect! With a splash of lemon, and a bit of mayo, they were just great. I mean, when can you go wrong with fried stuff? NE-VER. Speaking of the mayo. Mmmya, you kind of over did it there, right chef? You got carried away, didn't ya? It took over half the plate! At first, Mona thought it was a design on the plate! Hahaha! But seriously. 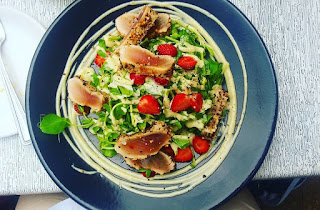 Albacore tuna tataki salad. On paper, this sounded like just what I needed in ma mouth. Watercress: check! Strawberries: check! Tuna tataki: check! Oh but wait.... WRONG. The watercress was not cut in any way, shape or form and so I was struggling to fit it in my mouth. I'm not asking you to cut everything... but it should be bite size. I hate having to actually cut salad. The strawberries were great and obviously from here, which is even greater! They were sweet and were perfect in salad format. The vinaigrette was most likely wafu and quite overwhelming. It was thick and there was just too much of it. A little bit less and it would have been awesome. In this case, too much was just too much. And now for the pièce de résistance, the tuna. Let me say that I am not one to mention it to the waiter if I don't like my food and, seriously, this time, I was disappointed in myself for not doing so. The tuna was ridiculously expired. I mean, it must have been at least 6 days old. It tasted fishy and the colour was so uninspiring! The only good thing were the steak spices with which the tuna was tatakised (We totes use that verb at work. As in: 'vas-tu tatakiser le saumon?') and that's it. Very, very disappointing.

Service was ok. It wasn't wow and it wasn't shitty. It took a while to get our food... but then again that is mostly the kitchen's fault. They were in a big hurry to take our orders but then they lacked in speed. It's a week day lunch time guys; speed it up!

Food: 5.5 Obviously because of the fishy tuna
Service: 7

Well, the tuna salad has inspired me to just NOT go back.