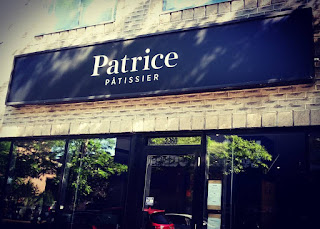 Y'all know I'm a pig. I consider myself quite the glutton from time to time. I totes own it. I know I go overboard. Well, to continue in that same vein, I went to Patrice Patissier the other day. Whaaaat? I craved good pastries and... I craved good pastries! Oh, and it's a 3 minute ride from work. What!!!

At first, I wanted to try the whole shabang: lunch AND dessert. After further consideration, I decided to only do dessert because A: lunch is a tad pricey and B: obviously they are known for their desserts! 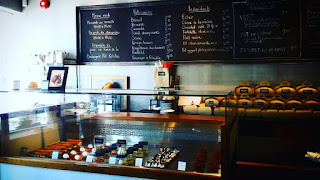 So this is what I could only describe as a fancy pâtisserie. There are many employees in the kitchen with chef hats looking all clean and professional and what not, making awesomeballz desserts. Patrice Pâtissier also do catering so that's why there were so many people working hard, I presume. The place itself is on the dark side, with dark wooden floors and grey walls and black chairs. There is a counter that can hold up to 6 peeps and the dining room, around 20 ish. Everything just looks flawless and impeccable. And that, ladies and gentlewomen, is a rare thing in the restaurant world. Oh you can trust me, I've been there (8 times), done that (I'm gonna go with 20 times).

I needed to taste more than one thing, of course. For the blog, you know! I do it all for you, duh. 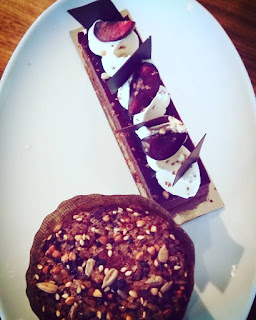 I didn't go THAT overboard, right guys? I mean, something sweet and something not so sweet. This made me feel way better about the fact that I was having TWO desserts! Banana bread: one of the best I've had, hands down. OR hands up in celebration? Mmmmyes. The crust was just so tasty and crunchy with sunflower seeds and sesame seeds! And it made it THAT much healthier! Although effin awesome, was a tad on the salty side, which, in smaller portion would have been a nice balance, but it was a tad too much. The inside was so moist and I would actually get pieces of banana. Pieces. Of. Banana!

The Forêt Noire was just freaking right ON. Lemme get something straight: I am not a fan of fruity desserts nor do I go out of my way to order them. Except, of course, in this case. And look how fancy that looks! I should have bought one for all my friends! First off, the dreaded dessert fruit. It was... AMAZING. That cherry had just been picked out of a nearby tree... in Montreal! Ha... I swear! It was juicy and everything a cherry should be. And then some! The little pieces of chocolate on top were very delicate and I felt almost bad eating them. Oh but I did. And oh, it was good! Imagine great dark chocolate, but better. The chantilly was just out of this world. It was to die for. I would ACTUALLY die for that. Not too thick and so soft and smooth and AWESOME. The cake part was just heavenly: moist (I've been using that word---that I hate---way too much recently) and just plain tasty. There was a cherry gelée, that I would usually hate, that I found really nice and not jellied up. Does that make sense? The important thing is that I understand what I'M saying :p

Service was good, although it wasn't like in a restaurant per se. She was very welcoming, with her cute hat and all. She described the desserts very well and totally made my choice easier. I got myself some water at their little fountain thingy on the counter and that was just fine and dandy.

Oh I'm going back there. Just watch me!