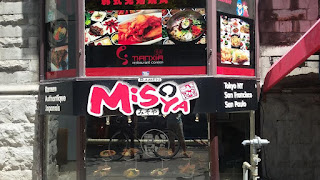 My token Asian friend Jer wanted to bring me to Misoya, so I could forget about Kinton Ramen. In hindsight, he should just have brought me back to Yokato Yokabai, but this one was closer :p

Misoya is located in a hole in the wall, on Bishop street. Seriously, you can still see dem rocks from the stone age in there. OK, I'm sure it was a bit after that. The resto is in a basement and when you enter, you get hit by a wave of not so lovely smelling cleaning products. Bah. For a second, I didn't see how I was going to eat in there. But obviously, I got over it. 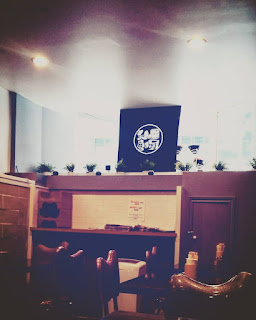 The place is quite small, with 32 seats. There's no real decor: some diner type lookin' chairs alongside some Asian 'art', bricks, mirrors and wood. It's somewhat of a melting pot. Ya, I'm going with that. 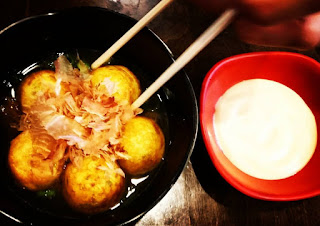 We started off with the takoyaki: or fried ball of octopus! Fried? Yes! Octopus? Used to be no but now, yes! Bonito flakes on top? Uhuh!!! It tasted like... fried stuff. Hahaha. Seriously... having not known what i was eating, I would not have guessed octopus! But it was a tasty, soft ball of goodness. Especially with a bit of mayo and bonito flakes to give more flavor to the bite! 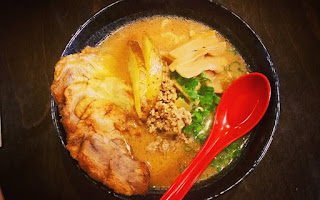 Le ramen. Komemiso cha-shu ramen to be exact. It was their 'recommendation' on the menu and Jer's aa well, for my first time at Misoya. This was a miso-style ramen from the region of Hokkaido in Japan, located in the northern part of the country, which explains the ever comforting potatoes in there. The meat was pork and cha-shu basically means that it is rolled into a log and then braised at a low temperature (https://en.wikipedia.org/wiki/Char_siu#chashu). It was double the meat, with cha-shu AND ground pork. I guess those northern folk really needed that extra fat! Hihihi. The ground pork was really good and full of that fatty flavorful goodness, but I found the cha-shu a bit on the dry side, although very tasteful as well. Miso based broth is my fave style of broth when it comes to ramen but this one was really salty. Like, really. Like, I could not have eaten this in a million years if I had a hint of a heart issue. A tiny little hint. The fermented bamboo shoots fit well in there but there was still  a little taste that I'm not uber fond of. I can't explain it. They weren't bad, but, for me, they weren't awesome either. Green onions always go well with ramen and they were there to add another layer of flavor and a nice little tang. Potatoes were way too much for me, and until Jer explained to me about the region and what have you, I was actually very clueless as to why I had potatoes in my ramen. Hey, you learn something every day! The noodles were thick and just rightly seasoned for my taste.

Service was Asian. Hahaha. I don't mean to be asianist here, but let's face it, that's the way they do things: quickly and efficiently. Hey, why am feeling bad here, this is a great complement! Quick like a cat! Anyhoot, water was on our table in 2 seconds and our dishes also arrived very quickly. I wouldn't expect anything less!

I'm totes going to try another ramen place before going back to this 'clean-smelling' restaurant!