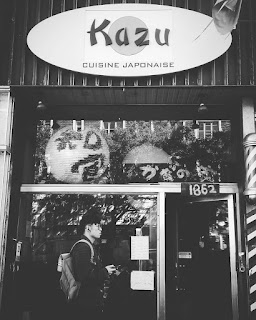 We all know (when I write 'all', I mean about 5% of the MTL population) that Kazu is one of, if not THE best Japanese restaurant in this city. It is so authentic, not half of the employees speak English/French or anything else than Japanese for that matter. When you want authentic J food (J food, iz a new thing), you go there. I went recently with my token A friend (Asian friend, come on, get with it), Jer, to continue my 'best ramen in Montreal' quest.

It is a hard quest, but it must be done, gosh darn it! Obviously, as of now, the big winner is Yokato. I won't hide nothin' from you guys! 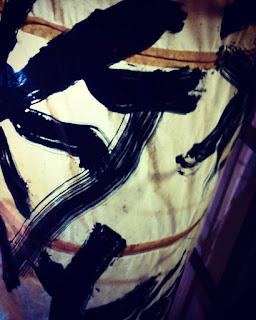 It's all kinds of Asian in this tiny restaurant. Read more about it in my previous post on Kazu:
http://www.eatingoutmontreal.com/2015/05/kazu.html 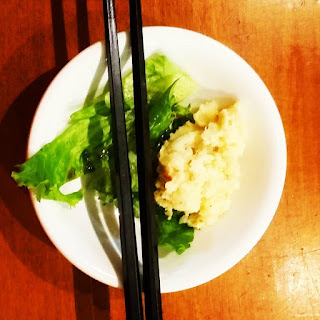 Commençons par le début, comme on dit. A little salad. Oh and by that, I really mean a little one. As in, hello there, tiny little salad, you so cute. You know, THAT. It was lettuce and potato. Yes, potato. The sesame based vinaigrette, if you can call it that, went really well and wasn't overpowering. Just roll up that potato in the lettuce and you're good to go. 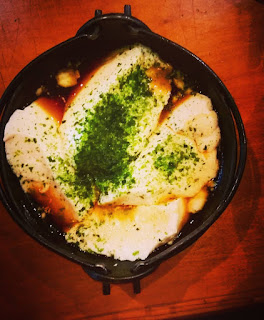 Homemade tofu, served only on Sundays. Lucky us, we went on Sunday. Booya. I gotta say, and don't no Asian (lookin' at you Jer) judge me, I'm not usually a fan of super soft tofu. It usually feels a tad slimy in my mouth and I just don't like that feeling. Well, I must say that apart from the trouble I was having trying to eat it with chopsticks, it was delicious! It literally melted on my tongue. And that bit of super light soya sauce was just enough to give it some flavour. I also really dug (that's right, I'm diggin' stuff now) the seaweed on top. All in all, a winner that could have just as easily been a loser. 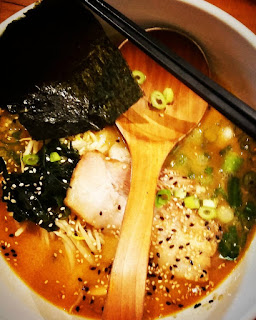 Le ramen. I believe they only serve ramen for lunch, which is exactly why we went at 11h45 am that day. Why so early? To be able to actually eat for lunch. If you don't get there early, you're stuck waiting and waiting some more. The broth was oh-so-tasty and just salty enough. Salty broth=no good! The noodles were quite great: they don't make them in house but one of the 男 (that's the literal translation of dudes hahaha!---I'm sure Google failed me again and it actually means penis--or somethin') told us that they have an outside supplier making them especially for them. The pork was great with all that fat. Get IN ma mouth, fat. And THAT is what I told the fat. OK, I'm officially weird(er).

Service was akin to any other Asian resto: uber quick. BAM, you're sitting, BAM, menu, BAM, water, BAM, dishes start arriving and BAM, you leave! Seriously, as soon as I put my spoon down, they took my bowl. It was quite spectacular.

Well, obviously I'm going back, no doubt about it! Jer, you in?

Just the fact that you are going back, Marie, and judging from your scores, it sounds as if the food and service here is great! Thanks so much for sharing. :)

Also, the "男" behind the counter who told you about the noodles is Kazuo the head chef/owner.