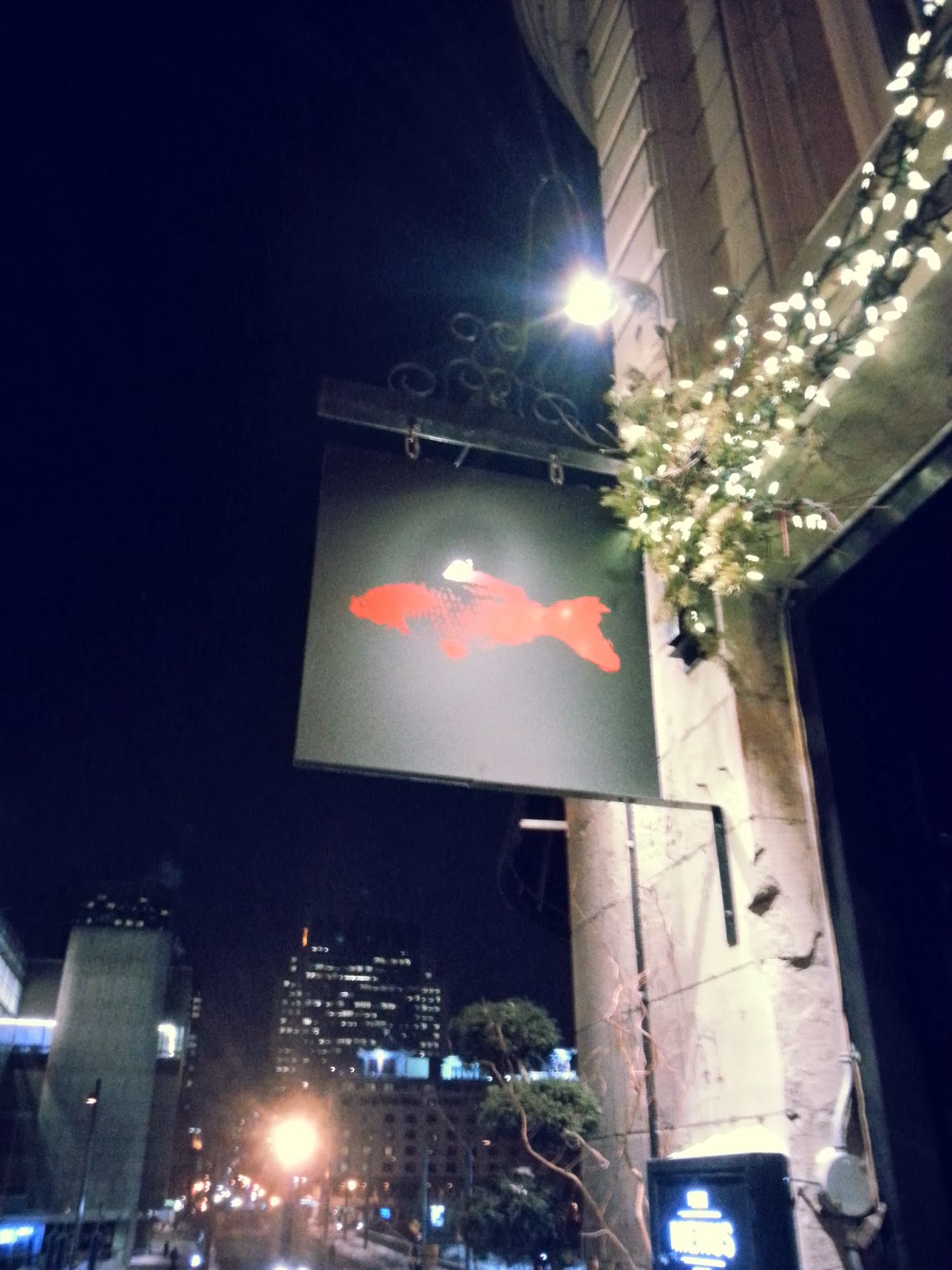 Since I didn't have the chance of going to the media event  of the Happening Gourmand, I KNEW I had to go to at least ONE restaurant of this lovely Happening. It's my third year and I've been satisfied every time. First, at Verses, then at Aix and tonight, at Kyo (strangely, where Aix used to be). Lea came with me to have a good time at Kyo!

Imagine my surprise when the first guy I see when we walk in is P-F, this guy that was in my class at ITHQ! And then, BAM, another Kyo employee was SL, this other dude in my class. It was fun to catch up for a couple minutes... and knowing them, I was sure to get good service. 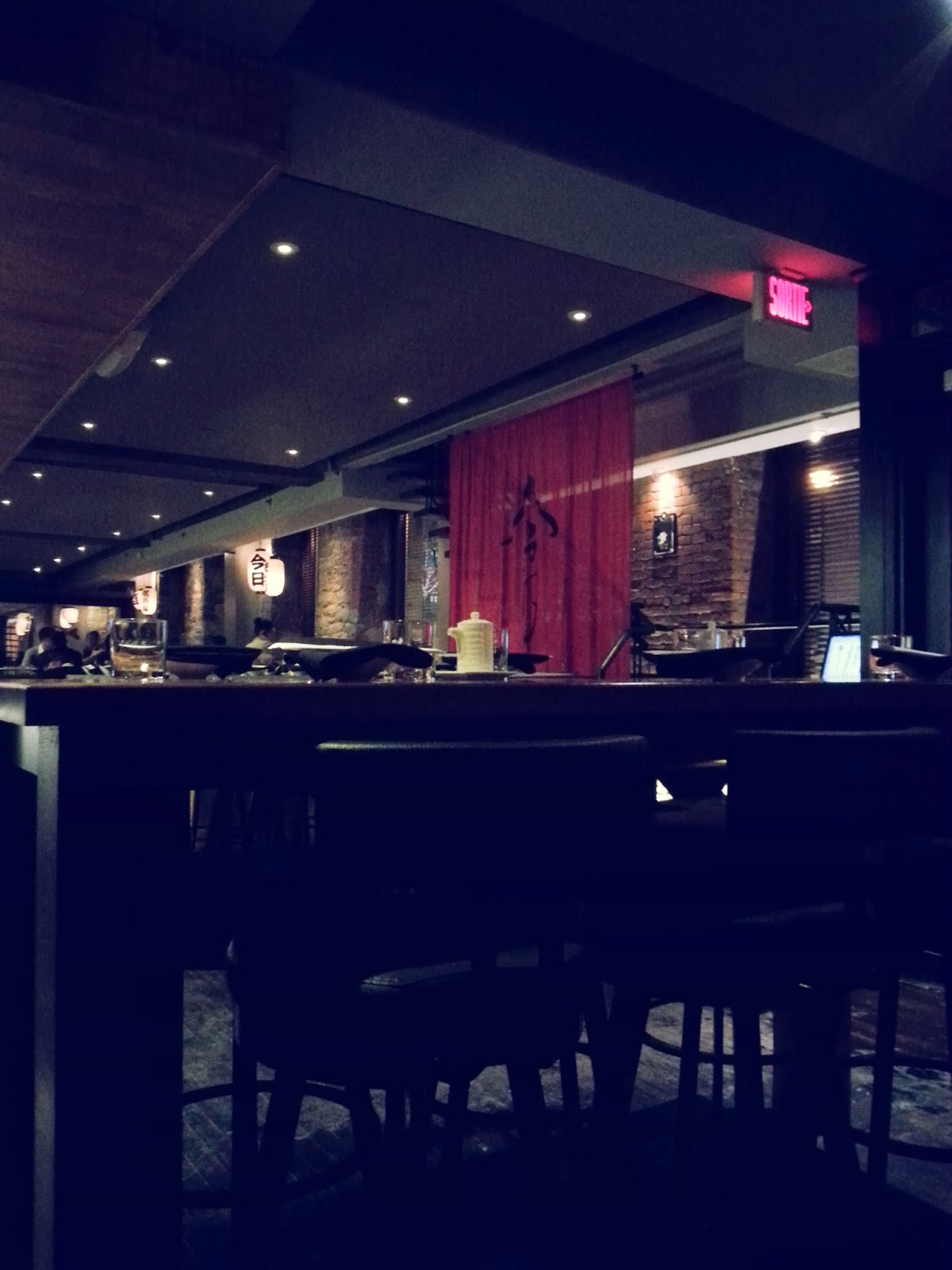 Anyhoot, the place itself is good lookin', with a definite 'cool asian' vibe (whatever that means!) but played music by Michael Jackson and Justin Timberlake. I guess they're going for a cool asian-american hang out bistro-type?! :) The place has a nice long bar and around 60 to 70 seats. 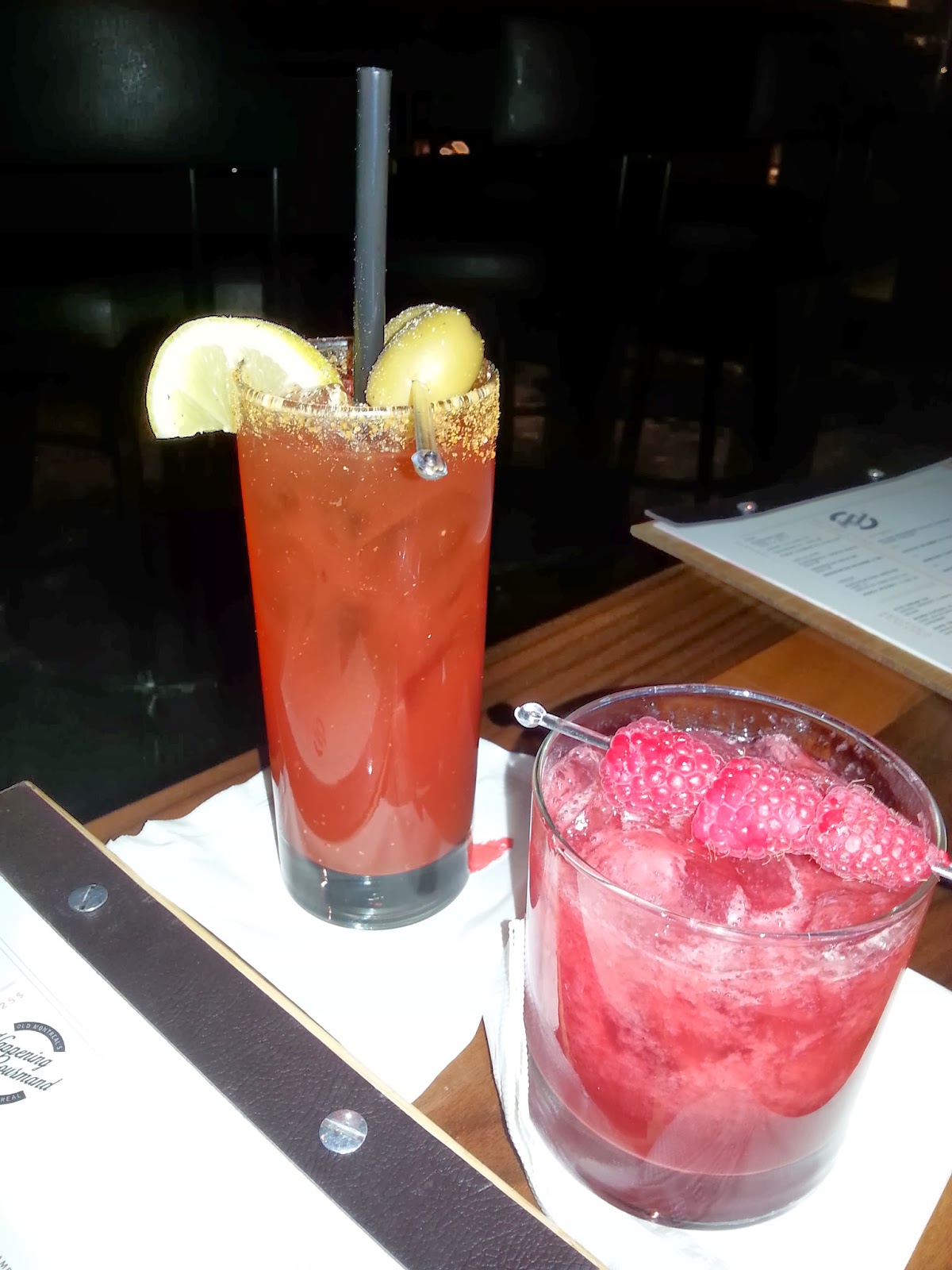 We were asked if we wanted a drink while we decided on our dinner choice and well, we couldn't resist... as per usual! I had the Kyo cesar and Lea had the Pinky Ginger. Mine was shochu, vodka, clamato and wasabi. It... tasted like your run of the mill cesar. It was good, don't get me wrong, but it was your usual cesar, maybe a tad spicier--wasabi and all. Lea's drink was very sweet and very girlie: shochu, chambord, cranberry, raspberry and ginger. Like I said, girlie! It was VERY sweet. Not my kind of drink, especially for a sushi dinner. But Lea loved it and found it 'dangerous'...you know, the kind of drink that you can have 5 of and not taste the alcohol and then bam, you're drunk. 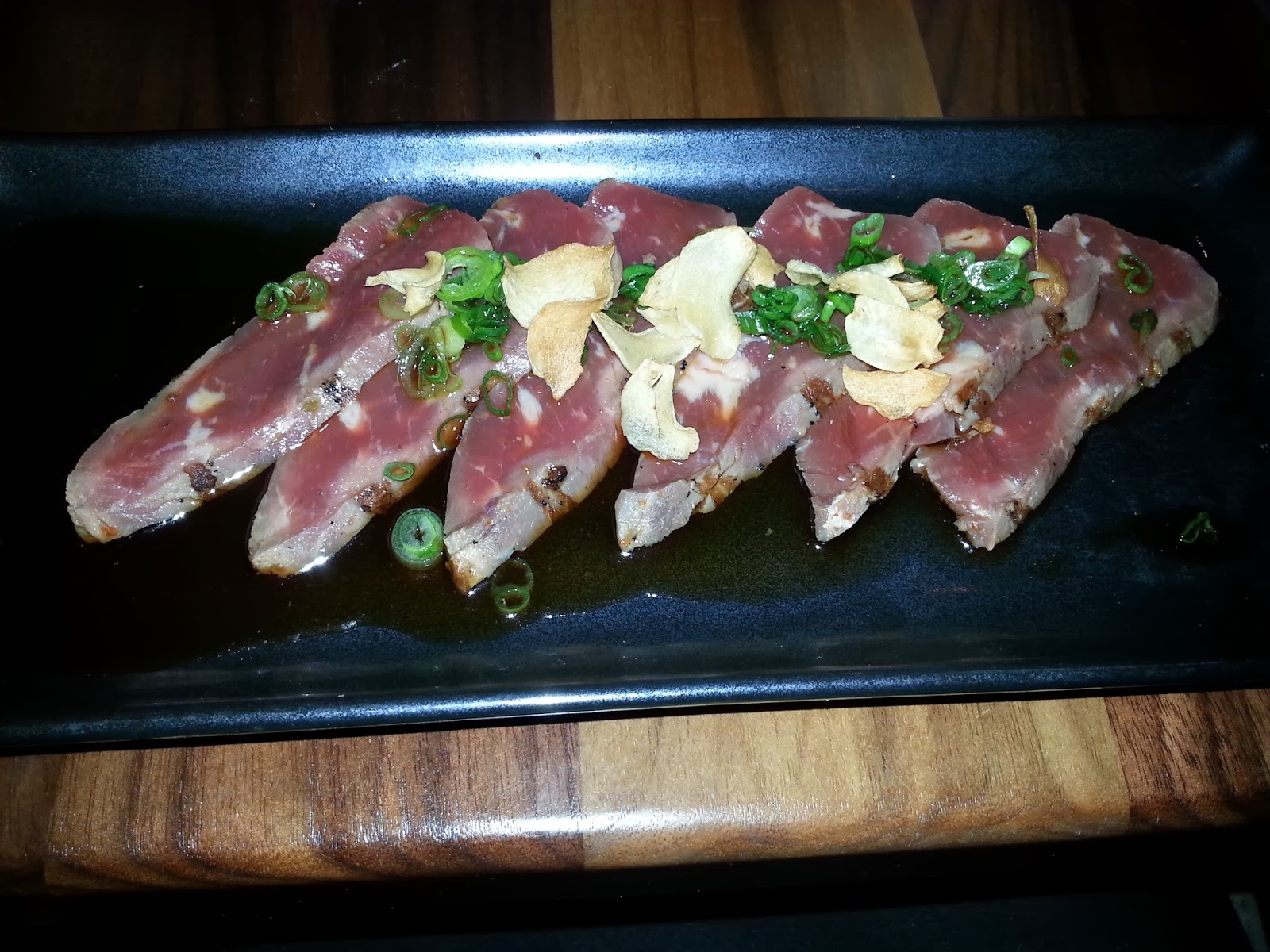 Alright, it was time to EAT! As an entrée, I ordered the beef sashimi with crispy garlic, green onions and ponzu sauce. YUM-MY! The ponzu sauce was marvellous and added just the right amount of tartness to the dish. The little garlic chips were perfect (uh, do you not know I love garlic?) and added just the crunch needed! The only thing I didn't appreciate, and this is personal because of my tiny mouth, was that the pieces were a tad too big. 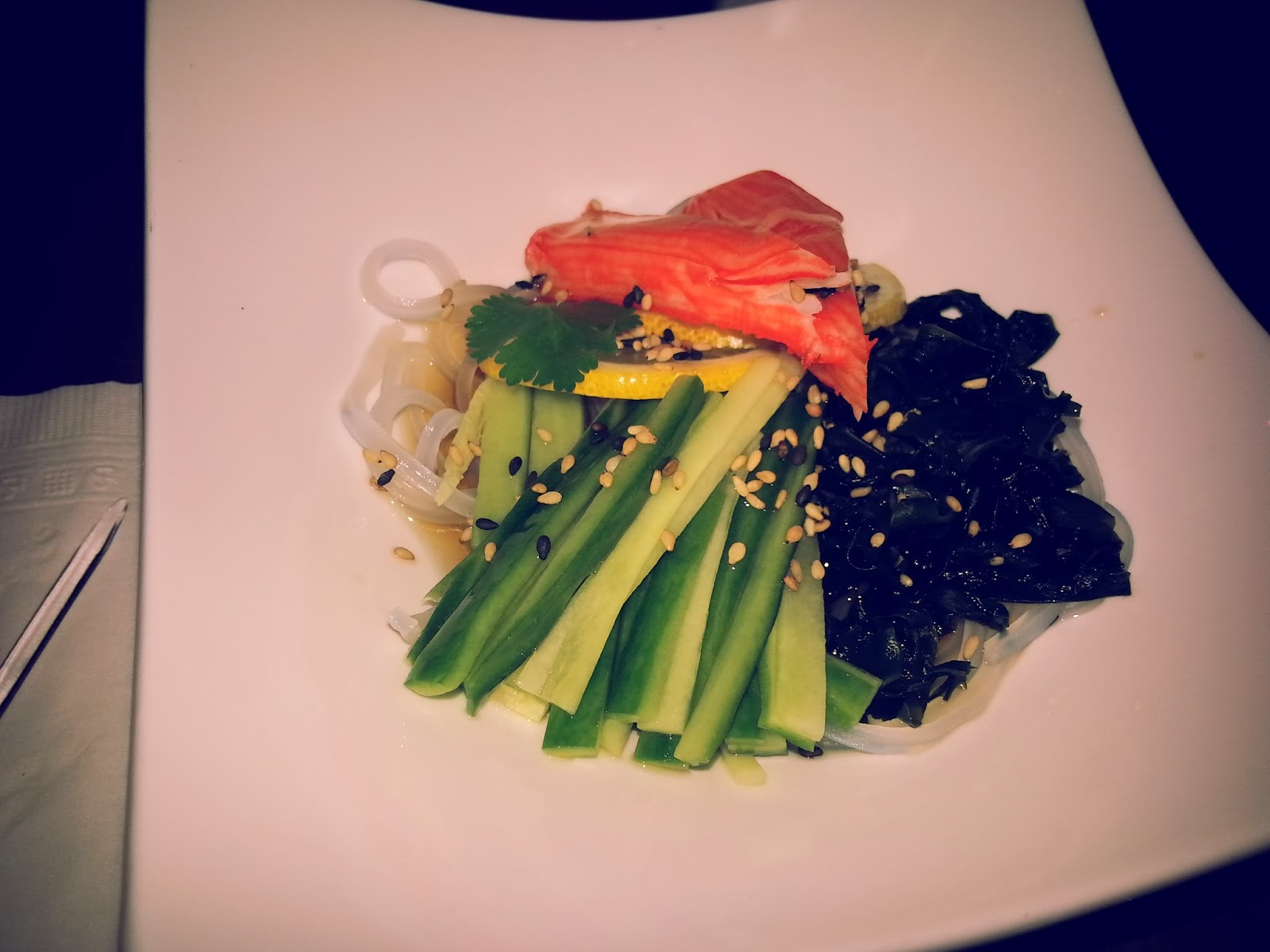 Lea had the sunomono salad with harusame noodles, coriander, cucumber, wakame and kanikama (a fancier sounding word than mock crab. This was actually a delicious blend! I could have done without the wakame though; not a huge fan of it on its own. The mock crab was actually really delicious! Who knew? The harusame noodles (also called cellophane noodles or glass noodles) were very tasty and had absorbed the lovely flavor of the sauce. It was all very fresh. The sesame seeds added a certain je ne sais quoi to it all and made it a great dish. 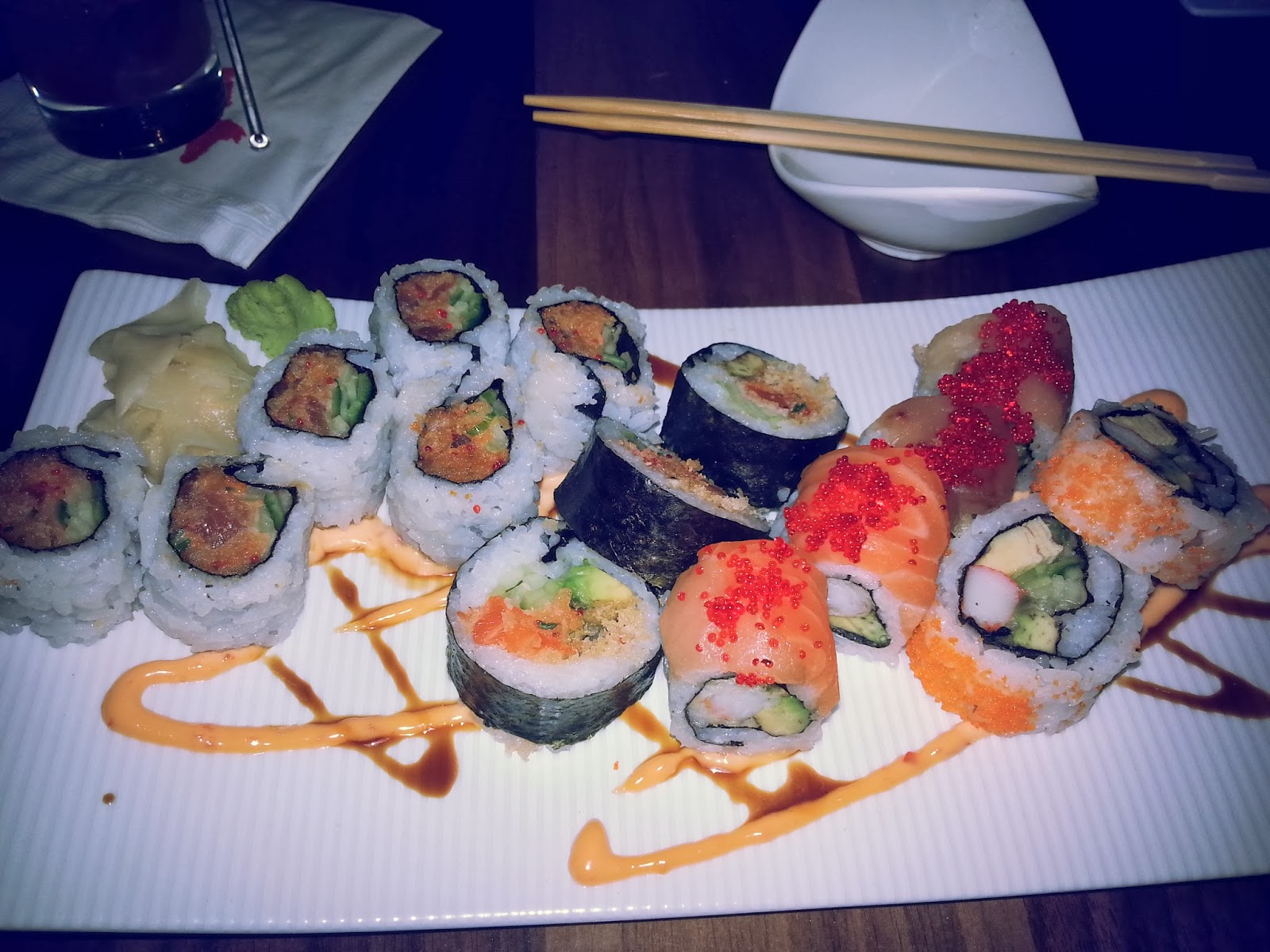 For the main, I had the chef's selection of 15 makis: the tuna maki, the kamikaze, the dragon roll and the california roll. The plate looked great with zigzags of soya and spicy mayo. The tuna roll's rice was a tad dry but it tasted really great neverheless. With a hint of soya sauce, wasabi and spicy mayo, it was wonderful. The kamikaze was as tasty and the avocado was just ripe enough. The dragon roll just melted in your mouth. Plus, the tempura shrimp was nice and not as crunchy as usual, which I usually hate because it gets stuck in my teeth :p The california roll was good as well but not the star of the dish. 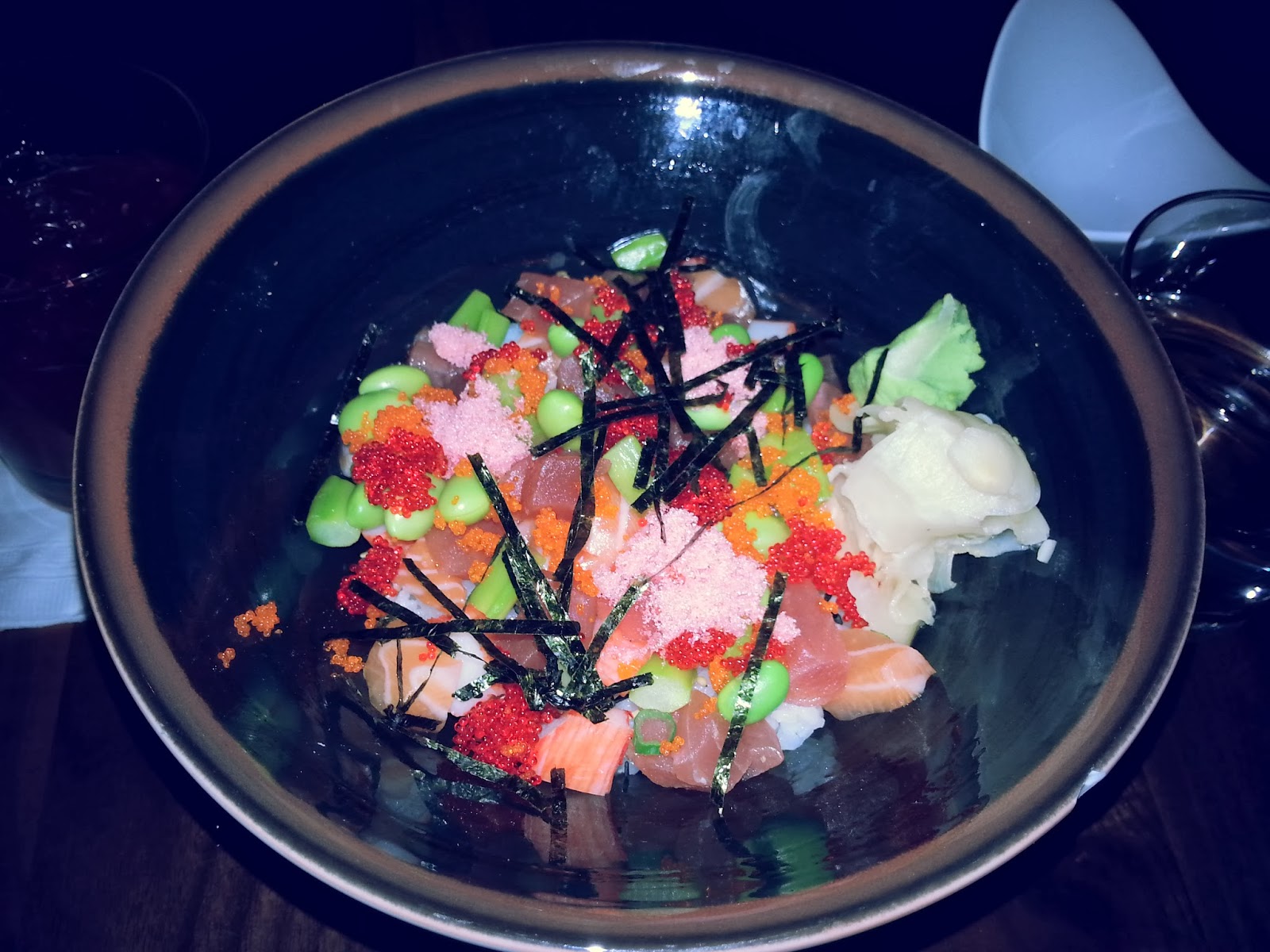 Lea's salad was very colourful. I mean, look at those colours! It was like deconstructed sushi! On the menu, it said this: Chirashizushi (Lea had a hard time saying this, even after a couple tries!): seafood, assorted raw fish, asparagus, omelette on sushi rice. I don't know if there was a change in the menu because of missing ingredients but there were no asparagus in there. Good thing is that they replaced it with edamame. And maybe Lea ate it all before passing it to me, but I didn't taste any omelet in there. That was also alright with me! The whole thing was just so pleasant to eat, with little surprises of raw fish here and there. 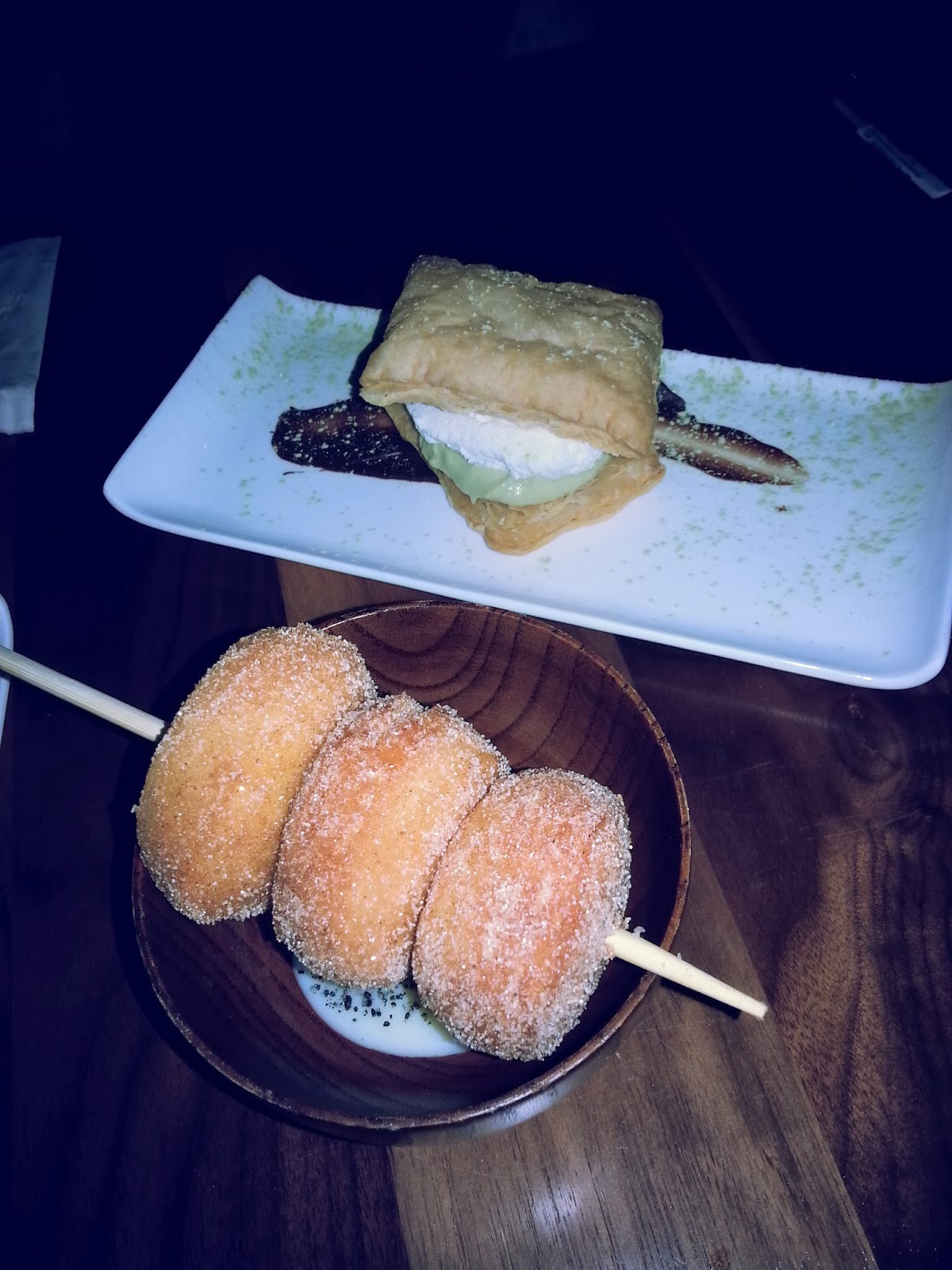 For the desert, I had the yuzu donuts with the condensed milk and sesame and Lea had the homemade green tea flakie pastry. My donuts were very good and it was obvious (especially with the waiting time) that they were freshly made. They were moist and lovely tasting: the yuzu kind of reminded me of eucalyptus and the condensed milk+sesame added just the touch that was needed. The flakie was just so didely-dam good! I took a couple bites and Lea slowly pulled the plate back towards her just to devour the rest. Damn it! It was so soft and daaaamn, melted in your mouth, literally! Just a hint of chocolate on the plate was a nice touch. basically, the keyword here is YUMMY!

Service was great, duh. Our water glasses were always full, our waiter came by to check how our food was at every course and we had pleasant discussions :) The only thing was that when we were done the main, it was a bit long for them to pick up our plates. And that'll be all :)

Oh, and did I mention that we got our drinks for free? Yep, P-F went to tell the maitre d' that he knew me and she was nice enough to offer them to us! Ah, I love it!

If you want sushi or a good tataki plus get great service by experienced ITHQuois (its a REAL term!), go to Kyo!

Hey there, you're the worst restaurant blogger ever! FYI: everything you say is biased, genius... its a blog!!

I took the advice in your blog, either your mentally ill and deranged or you gave no taste. I went there based on ur biased opinion and had worst experience ever. The food was average at best, and for the quality of food it was sooo overpriced, and the service wasnt there.

Please let this be a warning to all - this restaurant blogger doesnt know restaurants. maybe you should get another hobby!!

the only thing this place has is the atmosphere. you can get that anywhere else. no thanks!