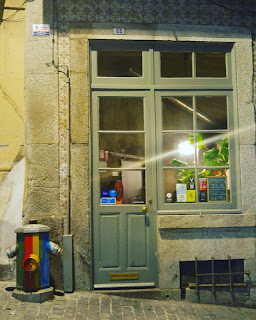 Mona and I made a point of finding non-touristy restaurants while we were in Porto two weeks ago, and I think we managed to find a couple gems! We visited Miss OPO on our last night, located on a small side-street, going down to the Douro. Ugh, I miss everything I just talked about: Mona, Porto, Miss OPO, and the Douro. But enough reminiscing! 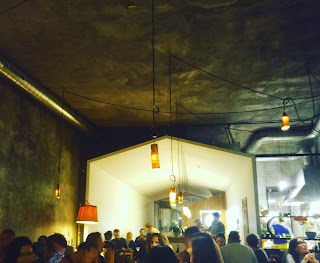 First off, it is called that because OPO is the airport code for Porto. I know this because I'm a: so cool and b: I work for Transat. Mama knows her airport codes. And Miss OPO sounds way better than Miss YUL (Montréal's airport code). This place seemed very hipster-like. Maybe a bit too much so... They had a communal table at the front, cement floors and walls and minimal deco. I'd say it was a bit industrial looking, but with wooden tables and chairs giving it a classic touch. The menu was written by hand on a notepad: they change it every day, which is very cool. 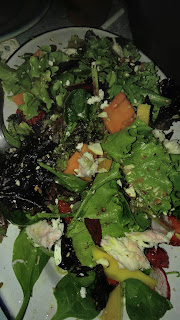 We shared two dishes: the 'Pretty Salad' and the 'Shrimp with finger lickin' sauce and okra'. And we shall start with the salad. It WAS pretty, unlike this awful AWFUL picture, hahaha! This salad was supes fresh and ubs pretty! Some crisp greens, almonds for the crunch, sweet papaya and strawberries, hot radishes and very tasty and perfectly ripe mango. I usually am not a huge fan of fruits in salads but this totally worked. There was also fresh cheese in there, which totally completed the dish. We really loved this one. 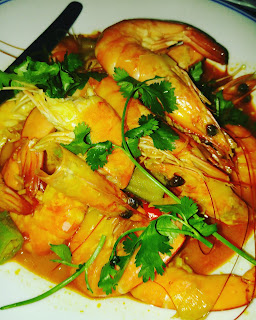 The shrimp. OK, I'm just gonna mention again, as if you didn't know, how much I loves me a good shrimp. If someone would ask me to choose between a person I really love and shrimp, I'd have a hard time. If I could just eat one thing all day, every day, I'd choose shrimp. If shrimp is on the menu, that's what I'm having. If I could MARRY shrimp, I'd need a damn good reason not to do it. If...you get it. They were cooked to perfection and they had absorbed all the flavor from the sauce, which, as the name says, WAS finger lickin' good! The okra fit right in there and just biting into it, all that flavor would just explode in my mouth! We had soooo many carbs all day every day while in Porto, that it was nice not to be eating bread or rice or potatoes or bread again.

Service was not the best. Actually, quite bad. We entered and were greeted by...no one. HAHAHA. She came to see us after a couple minutes and just announced that they didn't have any tables. Then, she decides to put us at this bigger 'communal' table. A waiter comes over and he was rude too. We were then asked to change to a smaller table because a bigger group had come in. Geez. Our waitress was actually nice and was able to crack a smile or two. Third times' a charm!

E agora, a pontuação! (And now, the scores!)

I would LOVE to say I'd be back buuuuuuut, myyaaaaa, I'm pretty dang far.