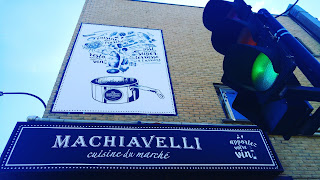 I've been to Machiavelli before: once, about 8 years ago for dinner, and the second time, about 8 months ago for brunch. I absolutely loved it both times. Like, THIS is love. And good for me (and them), I live a 5 minute walk from the restaurant. I went with ma boo, Bridge, who is an ultra regular at Machiavelli. As I was talking to the chef-owner (that, just by the by, has owned this resto for the past 4 years and is freaking TWENTY NINE), she suggested I come for dinner so I can eat to my heart's content and take pics and what have you. That sounds like a pretty damn good deal if you asked me. Go ahead, ask me. YA, iz a GREAT deal. 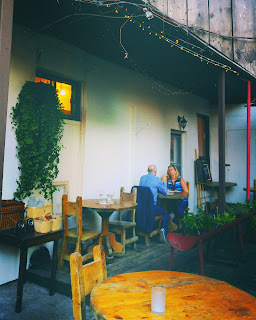 Machiavelli is this cute little restaurant that has a nice terrace right at the back. Like, supes cute. Lots of flowers and herbs and outdoor lights. On top of it, the ambiance is just lovely. Basically, you feel like you're in a friend's backyard, but with people serving you freaking awesome food. Disclosure: this picture does NOT do it justice.

I asked them to surprise me and told them that the only thing I didn't want to eat was pasta or anything ubs heavz (you get it). Bridge knew exactly what she wanted. Heeeere we gooooo! (Let the feast begin) 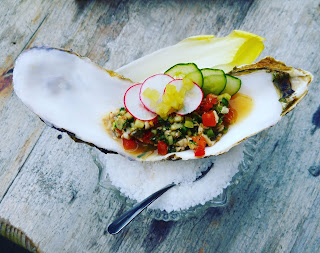 The mother f*ckin' giant oyster. This thing was so huge, it had it's own area code. Ya, I went there. Nostalgic for old 'Yo mama's so fat' jokes. Hehehe. Anyhoot. They cut up the meat and mixed in some onions, peppers, cucumbers, and horse radish. There were endive leaves on the side that we were supposed to use as a vessel... but we realized this only after pigging out with the spoon. Wonderful flavours ensued. I would like eight more please. 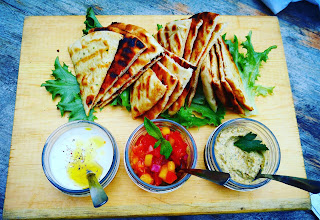 There was also the Trois petits bernardins (like the mason jars!): three dips with homemade pita chips. Tzatziki with orange essence, salsa of mango, tomato and cumin, and a spread of roasted veggies. My fave was the tzatziki, because it was so smooth and the orange actually fit really well with the garlicky softness. Ya, it's a thang. The middle one was a fresh salsa that Bridge found way too cuminy. I gotta say, I'm fond of the cumz but this WAS on the bit-too-much side of things. A tad too intense. On the other hand, I did love the combo of tomato and mango! The third was the spread of roasted veggies; Bridge's fave. The roasted goodness really came out, especially in what seemed to be eggplant and zucchini. Quote from Bridge: 'I want to eat this forever'. Well said Bridge. Well said! 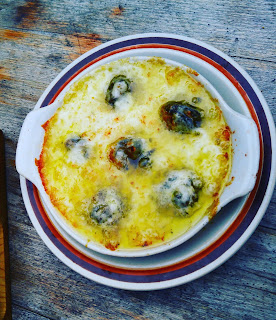 The escargots. Bridge really wanted them escargots! And now I know why! The ONLY bad thing about this dish was that there were only six. Come oooon, I need at least 14. Sounds like a good number. Sounds like the RIGHT number. I digress. They were perf perf perf. Just cheesy enough and garlicky enough and hot AF, which is what is needed with the escargots. Of course, we dipped the remaining pita in the butter. Duh. 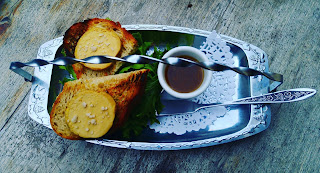 Le foie gras. mama likes her a good foie gras. Mmmm. They marinated it in Brandy for one day with a bit of salt and poached it at just the right temp. It had just a pinch of fleur de sel to make the flavours pop and it was accompanied by somewhat of an apple jammy. A jammy. Just by looking at it, it was spreading itself on le bread. The apple dippy was the perfect pairing. It wasn't too sweet nor too strong tasting, so that the foie gras was still the star of the dish. But when is it not, am I right? 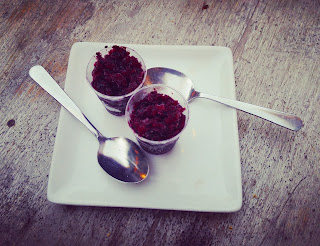 A little palate cleanser is always what the mouth needs between courses. And also because we're fancy damn it. It was raspberry, blueberry and Brandy. It was quite refreshing and my palate called and said it was totes cleansed. 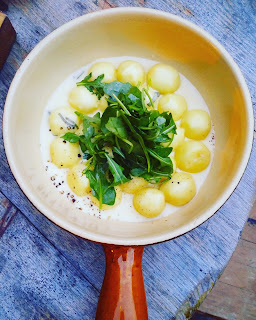 Boo's gnocchi looked DElicious. Stuffed with mozzarella, with a buttery sage sauge. Oh ma gawd. Bridge took one look and said 'oh Imma goonna take this home fosho'. Ya, with her tiny little stomach, poor thing was already ubs full. Even I was gettin' there. OK, think of a cloud. A very fluffy cloud. And now, put it in yo mouth. They were just perfectly round and cheesy. Also, usually, I'm not the biggest fan of sage because I think it's quite a strong herb that is not used very well, but this was so good! It married very well with le cheese. Sage and cheese=winning combo! Let's just say she had the best lunch at work the next day. 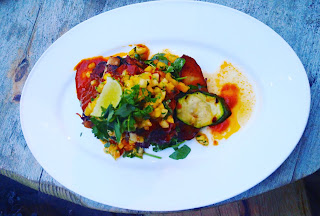 Pork El Pastor. I think I'd like anything El Pastor. That sweet mix of pineapple and pork, coriander and onion. That just does it for me. Gimme that every day and I'd be the happiest of girls! The pork was so tender and was breaking up so easily! That is what I love... in life: meat that falls off the bone. It was accompanied by a tasty pineapple salsa that went supes well with the marinated meat. The coriander, as we know, goes with everything. Meat? Yes. Fish? Yes. Seafood? Yes. Veggies? Yes. Dessert? Sure, why not? I had a little taste of the potato and it was just perf on top of perf. Just cooked enough (ugh, I hate over OR undercooked potatoes--it's a fine line!). With a squeeze of lime, it brought this dish to a whole other level.

(Note: my picture was SO bad that I don't feel right posting it here :o )
Le dessert. What? I HAD to have dessert! Pistachio crème brûlée and brownies with blueberry coulis. Decadent? Oh, just a bit. You know, when you've decided to pig out... The crème brûlée was perfectly hard on the outside and soft on the inside. I think I have as much pleasure as Amélie Poulain when I break through the top layer of the crème brûlée! The taste of pistachio wasn't ubs strong, just present enough. The brownie was so soft and moist, I just couldn't, you know, not eat it. And with the blueberry coulis, hello. Oh, hello.

Service was right ON throughout the evening. I gots to be honest here and say that most times, when I am invited to a restaurant, MY service is rockin' and not so much for the other patrons. In this case, everyone looked happy. Our waitress totes accepted the fact that we were speaking in Frenglish (no explanation needed), and she, herself, started speaking the same language :) We got water quickly, we got an ice bucket for le wine and she asked us if it was to our liking many times. She also didn't judge us when we got slightly drunk after drinking 1 bottle and a half of wine hahaha. We got to meet Natassia, the chef/owner after our entrées and when we left, and I half drunkenly thanked her SO MUCH for the AWESOME dinner, I don't even think she said thanks... she just said that these two other cooks (next to her) worked as hard and I should thank THEM. And then, I fell in love with her. Natassia, if you read this and you're single, please write to me. (ps: she DOES have a bf, I FB stalked her...pps: YA, I'm like that)

Just FYI, Machiavelli serves up an AWESOME brunch on Sundays!!! I've been and damn it ever was it ever mouth watering! LETS GO!!

You and I both know Imma be back. And I'm telling everyone I know to go. E-ve-ry-one.

After a number of} years of uncertainty, sports activities playing is a certain wager in Massachusetts. Tribes consider the 점보카지노 federal Indian Gaming Regulatory Act gives them authority to conduct online betting statewide, using servers on tribal lands. Kenya’s betting panorama has been in disarray since 2019, when a dispute between authorities and operators over tax led to its two leading operators ceasing operations within the nation. However, an amendment to the bill would add mobile cash switch to the record of approved cost methods, while removing bank cards, which had been also banned as a form of cost earlier this year in Great Britain.