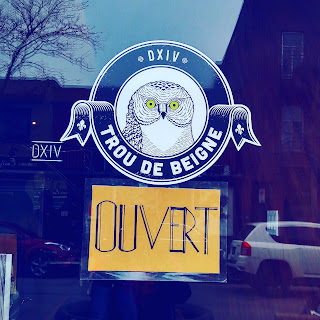 After eating spicy stuff at Pum Pui, Jer bear and I were lookin' for a little somethin somethin sweet. You know, a little somethin somethin. Jer had a marvelous idea: "oh, there's a tiny donut shop right there'. Ya, ya, I'm ok with that. And THAT's how it went down!
These donuts are hand-rolled, fried and glazed every morning. Actually, they have two sizes which is just gosh darn awesome. For full on fluffy experience, they suggest, nay, TELL you, that you must eat them the day of. Makes sense: no one likes a stale donut. The place itself is tiny, with only a couple tables and le counter to order. They only have a handful of varieties, but even then, they go like cray cray. We were there for a big ol' 10 minutes and I saw at least 3 peeps coming in for big orders. I was like dang this bound to be good! 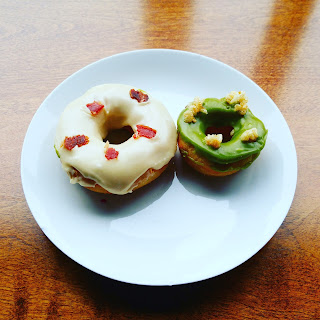 Jer had the bacon+maple donut and I had the green tea one. You know, might as well make it a "healthy" donut. HAHAHA! Ps: there is no such thing. The bacon 'nut (yep, it's happening) was ubs sweet (like, more than a usual donut) and I just thought that if you're gonna put bacon on something, make it worth it, no? The answer is ALWAYS yes. Like, put some IN it... make it proud of being a bacon donut. I gotta say that the bacon that was actually on le donut was quite lovely indeed: it gave just the right amount of salty and crunchy.
The matcha donut I had was too sweet for a matcha donut. Didn't feel it, you know? It was so cute though: I had the small version and it was green with some crispy rice on top which made for a nice little crunch. It was also overly sweet which kind of turned me off.
And now, le score!
Imma give a 6. Obviously, there are some other flavours I'd like to try like the S'more and the Chocolate-raspberry. So yes, I might go back if I'm in the hood.