Recently, ma girl Em and I went to Colombia. You know, cause it was getting too cold here. You KNOW. We immediately fell in love with ceviche. I mean, I've had ceviche before, yes. I've had some pretty decent cevich (not a mistake, say it with style), yes. But Cartagena had some didely damn awesome ceviche. To be clear, we ate ceviche more than once a day. #obsession
Welcome to the CARTAGENA CEVICHE CONTEST!!!! WHAAAAAAAAAAAAAAAT! We rated 6 restaurants that served ceviche. Some damn good, some aight, some... just plain bad (sacrilege!!) 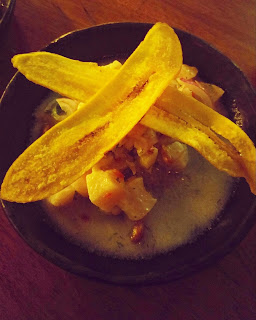 1. El Kilo: this restaurant was located right next to our hostel. As in, from some of the windows, you could see IN our hostel. Yep, that close. We were quite excited to try this because we had heard great things from a couple people that worked where we were staying. Basically, you choose what kind of ceviche and then you choose if you want either fish, shrimp, octopus or a mix. I obviously went for the catch of the day. Obvi. Duh. I had the bacon and sour cream ceviche. Yep, I went there. I ordered it, but I was scared of what I was going to get. Well, turns out it was DAMN GOOD! Wow! It wasn't too lime-y, and although the fish was cut in slightly bigger pieces than usual, it was actually OK. Pieces of fried plantain could be found within the fish and that was such a nice surprise every time! It added just a bit of sweetness in every bite! The bacon and the sour cream, although I would've never EVA dreamt of eating ceviche with those ingredients, was supes good. Supes! Just a bit of saltiness married very well with the sourness of the lime and the sweetness of the plantain.

Em had the reg cevich (why write the whole word when you can just write some of it, am I right?) and it was delish. You know: lime-y, but not too much, and ubs fresh. I know she somewhat regretted going with the reg cevich, especially after tasting mine!

Totes worth walking 3 meters for :p 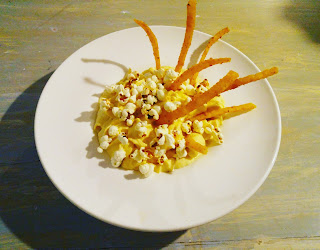 2. El Boliche: A lot of people had suggested we go to El Boliche, so, that evening, after going to El Kilo, we headed there. We called it Ceviche Crawl. Hey, it's totes legit! El Boliche was on a side street, so if we had not had the address, I do NOT think we would've found it. It was tiny AND full when we got there in prime dinner time, so we were seated at this huge communal table. All the dishes around us looked so good! We had the 'corn textures': shellfish, white fish, foam corn breadsticks. I think it's safe to say that Em and I thought we were going to be served somethin' else. 100%. Nay. 150%. First off, popcorn? Really? Come oooon!!!! THAT was a big surprise. Under that, there was a huge mother f*ckin' layer of foam. Ugh... so unpleasant! The thickness of it was too much. The little seafood was hiding under all that crap, and most of it felt squishy. Bah. Such a miss! This was another case of Marie-picking-the-wrong-thang-on-le-menu. 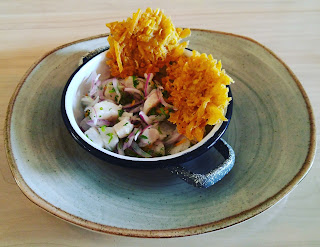 3. Tecado: Tecado was our first ceviche exp (get with the program people!), and it remained the one we went for the most. I think we went a good 5 times in 7 days. It cost 15000 COP (or 7,50 $ CAD) for an appetizer size ceviche. Totes worth it! Oh, and it was about a 2 minute walk from our hostel. The pieces of fish were just the right size: not too big, not too small, just bite size! It was simple ceviche, which, let's face it, is often best: coriander, lime, onions, fish. BAM. With just a tiny bit of spice, this ceviche wasn't drowning in lime juice like most were. There were deep fried plantain in the dish that were just damn awesome. It actually MADE the dish. It soaked up all that lime-y goodness and maybe, just maybe, you could put a piece of fish on it with, perhaps, a little sliver of onion. And just eat it like a sandwich. Just. Like. A. Sandwich.

Obvi, we went back many times! 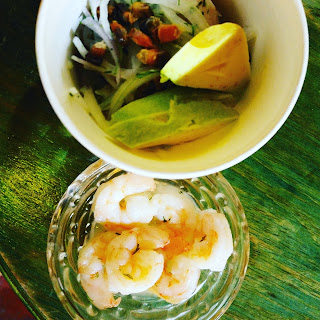 4. Cebiches y seviches: We were told that if we wanted to try another ceviche spot, we should try this place. It was located right at the entrance of El Centro, in plaza de los Coches, which was a nice meeting spot. Also, you could see it from everywhere, so if you'd get lost, you'd just look for the tall-ass clock tower. We also ordered limonada de coco, which, by the by, was such a nice discovery! I personally think (and I'm sure Em would agree) that if I'd do a ceviches y limonada de coco evening, it would be a HUGE success. They served us the ceviche in a to-go container exactly like the one at el Gramo, which was kind of meh. They knew we were about to eat IN the resto. Just take a plate out, dude. Take a damn plate out. But enough about their manners! The ceviche itself was very fresh, and the pieces of fish were perf. It had some crunchy corn on top which was wonderful: it's nice to have more than one texture in a dish. The avocado was just the right amount of ripe. It was actually a fish AND shrimp ceviche (I think all ceviche should be fish... I mean, come ON), so I took em' on the side. They were... OK. I mean, y'all know I'm totes in lurve with them shrimp, but I would've figured that shrimp ceviche was going to be this: cut up shrimp with some coriander perhaps, and some lime juice. But these were just shrimp in a tad bit of lime. 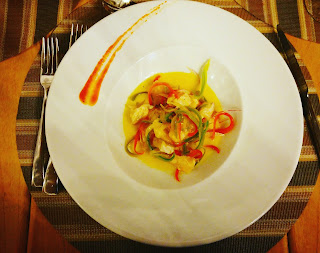 5. Agave: Em and I wanted to have a nice fancy dinner, so we went to this restaurant a couple doors down from our hostel. It looked fancy, the menu looked good, and so we went. And what a bad mistake it was (can you guess who DIDN'T win the contest?). As soon as the ceviche hit the table, we smelled it. We smelled the fish. That is NOT what you want. It didn't seem inedible, so we ate it anyway, risking our LIVES. In hindsight, we should've gotten the heck out of there. I loved the fact that there were peppers in there tho, and also that it wasn't overly acidy. The pieces were uneven and some had some fat on them: it just wasn't pretty to look at. And obviously, the fact that it was quite expensive, and that the wine was expensive, and that the bread was stale, and that my main was too oily... just made for a bad experience all together. We should have  known it was going to suck; there was no one in there. ARGH. This was a major fail on the resto's part, but also on ours.

Le food score: 4.5
We SO didn't want to go back that I think we purposely walked on the other side of the street every time we passed by it. 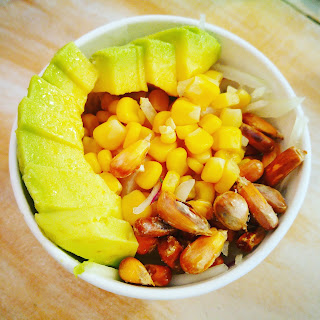 6. El Gramo: My friend Chris had been to Cartagena 2 weeks before me (believe it or not, we were 5 out of 8 people near my cubicle at work that decided on Cartagena), and he had strongly recommended this place for ceviche. We HAD to go! What's fun with El Gramo is that you can pick what you put in your cevich! Obvi, for me, it was fish, and I added some avocado, because who would be cray enough not to add avo?! There were some onions in there, corn, kennels, and coriander. I must admit, the onions could have been chopped finer... it was like eating an onion salad with some pieces of fish in there. OK, I exaggerate. The whole thing was ubs fresh and the corn added some needed sweetness. At first, it was perf, although they COULD have mixed the whole thang instead of just adding layers. In the end there was a sh*t load of lime juice left at the bottom and that became quite acidy very quickly.


As you MAY have noticed, le grand winner is Tecado. We just LOVED that place and it was SO close to our hostel! Cartagena was an awesome spot to eat so many types of ceviches! Our fave remained the classic fish-onion-coriander-lime cevich. Hey, sometimes, the simpler... the better... the BEST!