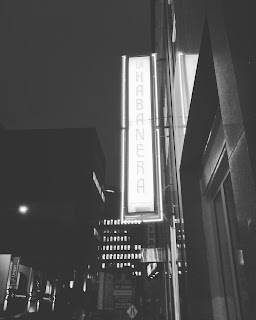 Cuban food. Been to Cuba, done Cuba. About 6 times. Well, I had to try the REAL thang. Cause, let's face it, when you go to an all-inclusive in Cubes, it ain't Cuban food. So I thought of La Habanera. And my girl Gigi was in! After all, I've never been to Havana ooh na na. Argh, I have that song in my head every damn second of every damn day. At least, this time, it was legit. 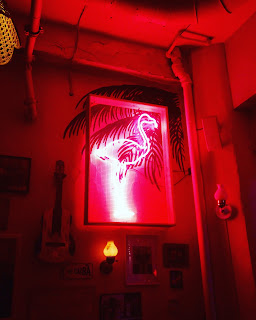 I absolutely LOVED the place and the vibe! You DO feel like you're in Cuba when you're in there! Super colourful, flamingo in  neon lights, palm trees, flowers in the windows, islandy festive music. 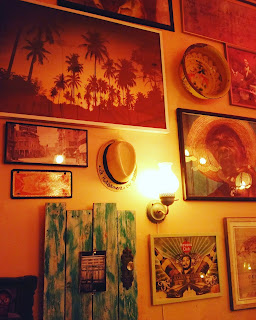 I just loved this wall!!! It totally brought me back to Cuba! Cuba Si! :) 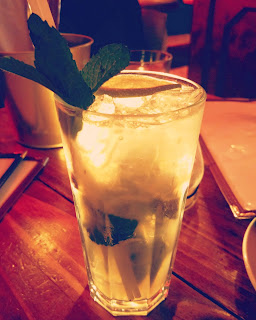 We started off with a mojito. Duh. That's all I need to bring me back to the country where I saw my first good lookin' topless woman on la beach. And I'm totes serious when I say that it was every bit like the mojitos I use to order in the Cubes (not to confuse with pubes, hahaha). It had more lime than the usual mojito and that's what made it better, I my opinion. 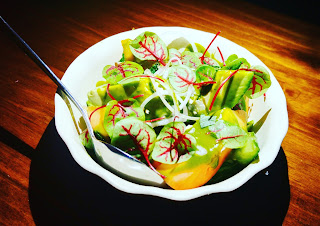 We were sharing food, which is ALWAYS the way to go. Listen to me: always. It should read: 'Be smart, listen to Marie'. Yes? Yaaassss! We got the salad first. The Aguacate: avocado, nougat, red papaya, oseille leaves, cucumber and mojito dressing. Did anyone say 'mojito'? Mojito in EVERYTHING! This was a hit and a half. And no, I don't know how I got the half. First of all, oseille leaves are SO IN right now! They are so damn cute and they add just a bit of acid. The avocado was perfection. You know, when Chandler is trapped in an ATM vestibule with supermodel Jill Goodacre, and he says that gum would be perfection? Ya, THAT kind. And no, I won't stop with the Friends trivia. The cucumbers were just the crunchy greatness that they should be, and the papaya was just sweet enough.

El Cubano (forgot to take a pic :/ ). Oh YASS. Pork, ham, smoked mustard, Swiss and provolone cheese, and pickles. Get. IN. MA. BEEEELLY!!!! Yum: grilled sandwich, supes cheesy, and ubs moist. The mustard added an extra layer of flaves and that was dang on. Yes... dang. 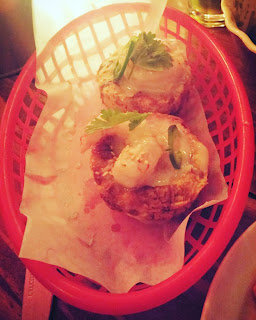 Tostones rellenos de camarones. Basically, this was a plantain 'cup' filled with rum, coconut, garlic, and dulce de leche shrimp. Sounds good, right? Ya, we both thought so. Guys, you KNOW how much I loves me some camarones! A good shrimp can go a long way. Nothin' bad to say about them. The plantain, on the other hand, was dry as all hell. Yes, apparently hell is dry. I guess because of all the heat and fire? The coconut was nice though, but let's face it, coconut is ALWAYS nice. 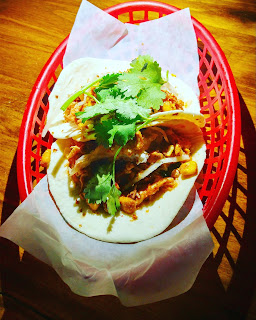 Tacos de pescado OR fish tacos! I love me a good taco! Mmmmmm... tacos! The tortilla was yummers (it's a thing), but the corn was too hard (what IS this, popcorn seeds?). The fish was moist (ugh-effin word) but lacked in flava. Basically, the whole thing was a bit meh.

We got our drinks very quickly, but then it took our waiter a while to take our order for the food. And we were HUNGRY. I'd wanna say 'never go to a restaurant if you're really hungry' but that just doesn't make sense!

Although I'd gladly go back for one of dem mojitos, I'll probs just end up finding 8000 other restos to eat at before I do.