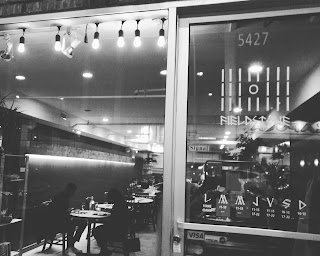 I was invited to try Fieldstone, a very new resto on the increasingly cool St-Laurent strip in the mile-end. This restaurant consists of very interesting and accomplished people: chef Yen worked at the El Bulli Foundation in Spain (HELLO!), and owner Emiliano, who really believes (as he should) that local is the way to go. They've been serving brunch and were inviting bloggers to try out their dinner menu! Don't mind if I do! I brought ma gurl Mar to this because, damn it, it was her turn. 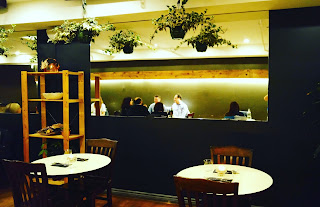 Fieldstone has a floor to ceiling window, which makes you feel like you are entering someone's living room for some reason. Actually, the whole décor is pretty laid back, with some shelves, long mirrors, plants. Un salon, quoi! It was very zen. It was also very quiet when we got there: even making noise with our chairs while we sat down actually made us feel bad. As the evening went on, it got fuller and louder so we felt better about the volume of our voice.
Emilio welcomed us very warmly, especially since it was freaking freezing outside. You know, the first really cold night and your car is parked just far enough (1 block), that your extremities have time to get frostbite? I exaggerate, of course. He asked if we had any allergies and informed us that we would be served a three course meal. Yes. My kinda night out. Since we were both recovering from drinking nights (I had my very boozy Office Christmas partay), we stuck to water for once. 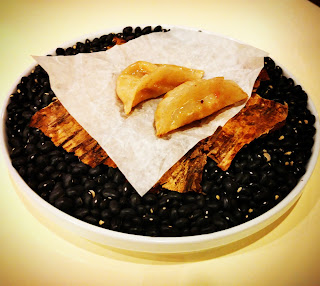 Amuse-bouche. I love that word. As Chandler says in Friends, "It is amuuuusing". Alright guys, I WARNED you that I would quote Friends every opportunity I have. #obsession. Kimchi and nopales dumpling. Ps: Nopales=cactus looking prickly pear. With me, you learn every day. And that's a promise! All this to say that the mix was not a good one. It was weird, but not in a good way. The kimchi was too present, and although I'm a huge kimchi fan, this did not work for me. The dumpling itself was also not on par. The dough was not cooked enough and lacked crispiness. 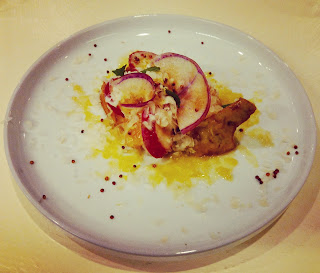 The entrée: pear and radish salad with sumac, tamarind, oka and pearl millet. Now THIS was quite a hit. The little tiny millet created such a big explosion of flavor in my mouth! Our eyes literally lit up. For serious yo! We immediately asked what it was so that we could organize a shipment :) This was such a weird mix but such a lovely one at the same time! The heat of the radish created quite a contrast to the pear, and the cheese was such a nice addition. The sumac and the tamarind added an extra level of flavor to make this dish one of the best entrees I've had in a while. 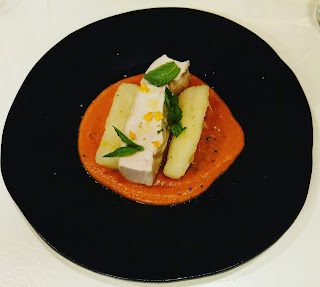 Le main: chicken with yucca and a very fine puree of coconut n'curry. My first question was this: oh, what kind of fish is this? HAHAHA!!! I then proceeded to hide my head in the sand. But for serious, it LOOKED like fish. It was boiled chicken. Don't get me wrong, it was the most perf poultry I've had in a while, but who boils chicken? I really liked the flavor of the yuca but wasn't too cray about the texture. It was, hum, filamenteux. Ya, I tried, there are no English translations. The puree right under was bang on. That's right. It tasted perfectly of coconut and curry. OR the best food pairing ever. It was the kind of dish that raised questions in my head. And in Mar's. It was good but we wondered why all these things were together in a dish. Also, why boil the chicken? WHY? 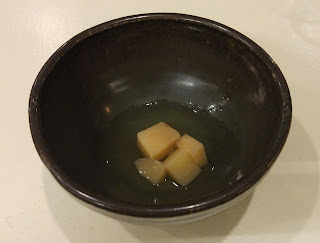 Palate cleanser. Wow, I haven't had one of those in a while! It was quince with some sparkling wine and guava. It was different and very good. I think Mar and I could have had one of those bad boys as an actual dish. For real. 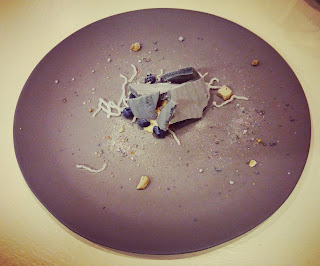 Le dessert. Foie gras ice cream and the rest. Because what's more important than foie gras ice cream? For those of you who care, there was also meringue and some blueberries. The ice cream was super soft and thick and, I was going to add 'just melted in your mouth' but I think we all know ice cream tends to do that. The mix of ingredients had been carefully chosen and everything fit together perfectly.

Service was good as well. It would've made my profs at ITHQ proud. Water was always refilled, and we were asked if we enjoyed our meal a couple times during dinner. The girl seemed a bit weird-ish. She didn't smile much and she seemed even evasive at times. In the end, we did discuss with her about the resto and what they were doing so she seemed more like a human then :)

I think it's safe to say that we enjoyed our experience. I must say that we were still hungry after so we went to Cacique to eat Tequenos. BTW, this was a whole other WOW experience.