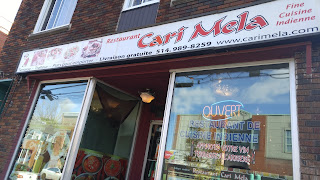 Cari mela is literally right around the corner from my house. It's really a mystery why I haven't been before. I just...I don't understand it. I went with my girl V, who is a big fan of the Indian persuasion, a couple weeks back, for lunch.
The place itself, like a lot of Indian restos, is nothing special. Dark room, old tables and chairs, crap on walls. That sums it up, I think. We got there for a late lunch and had not realized that they close again at 2PM until dinner time, so our lunch was cut short a bit, which kind of sucked. But hey, we should've checked! My bad! 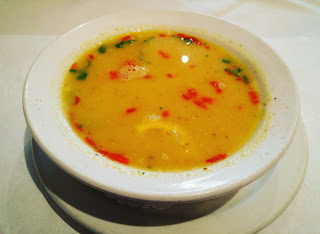 We had the midi table d'hôte, starting off with the dahl, a lentil soup. This was such a great soup. WOW!!! The lentils, the coriander; so fresh!! Really... wow! There was a hint of lemon that added a bit of tartness and went really well with the lovely coriander. God, I love coriander. If I could marry it, I would. I would've ordered another if it wasn't a dish that was about to make me fart up a storm. Ps: gym peeps, I'm sorry, it was me. 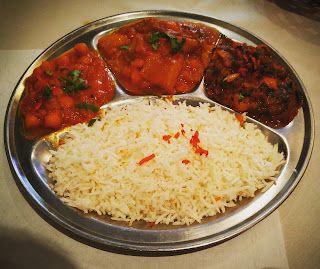 The vegetarian thali. I loves me a good thali. Usually, I have the non-veg one, but this time, I didn't really feel like eating le chicken. Don't get me wrong though, butter chicken is oh-so-effin-good! That was a sh*t load of rice though, damn! The chick peas were perf and the coriander, once again, was so fresh! Seriously, I'd eat a big bouquet of that, any time. Just imagine a big rabbit, but instead of a carrot, it's coriander. Anywaaaaaayyyy. The eggplant was uber tasty but salty AF. Damn! The boiled veggies were very good but I thought they could have used more spice. 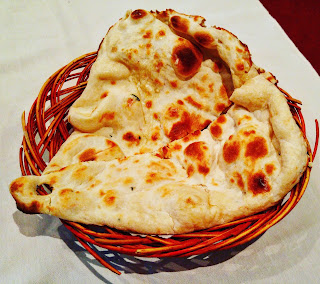 The naan. I'm serious when I say this was the best naan that has ever touched ma lips. Ever. It was so buttery and soft. Basically, what dreams are made of. 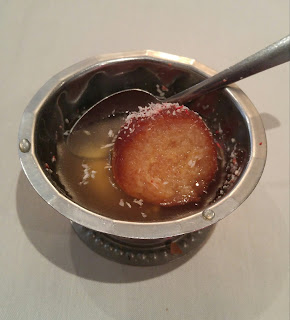 Dessert. I'm not going to say much about this. I WILL say that they had just taken out of the freezer and mine was still... frozen. Everything was just wrong.
Service was very quick and efficient, like in most Indian restaurants. GO GO GO! $$$! Hey, if it ain't broke, don't fix it!

Food: 8 (let's just NOT take that doughnut into consideration)
Service: 8

Well, I can't NOT go back: they are my neighbours AND they have the best naan. Hello.