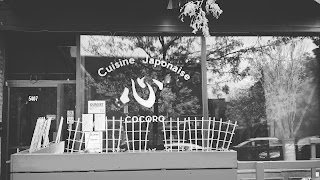 Ma boy was in between Asia trips (ya, he's, like, super cool) for work, so we had to hit up at least one resto. Cocoro is the new Asian baby on Parc. There are new Asian babies everywheeeere!!! I loves it, seeing as I AM half Asian. I'm not. I lie. 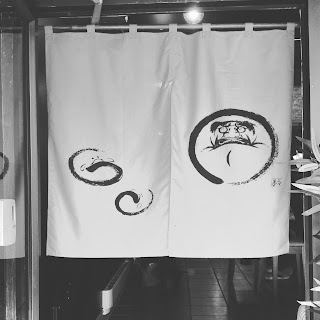 Cocoro is this small spot close to St-Viateur, with a curtain, nay, a noren, at the front, welcoming you. Well, thank you there, noren. Thank you. Don't worry, I'm on my way to the insane asylum. Right now. It's a very simple restaurant, except for the shelf at the far end of the restaurant with a big bonsai, some paper lanterns and other Japanese thangs. It looked a bit corny if you ask me. Come on, just ASK me. It's corny. The place has about 26 seats, and the tables were somewhat weirdly set up, but hey, who am I to judge? Well, I'm actually pretty well placed to judge. Hahaha. I ain't judgin' (I'm judgin').
We started with a very simple salad: iceberg and veggies. Iceberg, much like mesclun is not my fave kind of green. But the sesame dressing was silky and enhanced the flavours. There was a nice crunch to the lettuce which is 150% better than eating a wilted one. Bah. 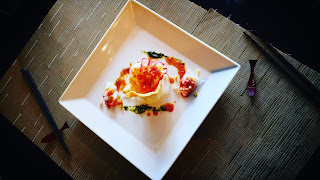 We shared the octopus as an entrée. It was very tiny, but it was very good, too! It was sliced really finely with some pesto and a miso sauce. Weird? Yes. Good? Surprisingly, yes! It was pleasant to take a little sliver of octopus and dip it in both the pesto and the miso! There were raw onions in the dish as well, which brought in some texture and, well, hello, onions! I would've never thought of all  these components harmonizing so well together, but hey, miracles happen every day (they don't actually HAPPEN, ever. Don't be fooled.)! On top of it, it was such a beautiful plate! They always say that you eat with your eyes first! Argh, I just got a mental image. 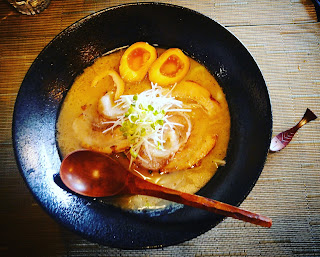 Le ramen. the quest continues!!! I was quite excited to continue this life-long quest. OK, life-long is a bit exaggerated, but I do tend to do just that. The broth had a meaty flavor, which was right up my alley, but it wasn't thick enough for our taste. That's right, we like ours so hard, we can't put our spoon or chopsticks through it! In all seriousness (yes, it happens sometimes), I like my ramen broth with some consistency, not one with close-to-water thickness (or lack there of). The egg was perfectly marinated and the meat was actually one of the best ramen meats I've tasted: just fatty enough to convey great pork loveliness on my palate. The noodles were disappointing and overcooked, and I don't know about you, but I REALLY (REAAALLLY!) appreciate a homemade noodle. And these were no homemade noodles. I know it's a bunch of extra effort but it's approximately 150% better when they are. There were some sprouts on top which actually added a bit of heat, which was appreciated. Quite indeed!

Service was good: I had a very warm welcome from the waitress, we were seated quickly, she checked up on us and we had water on the table in 2 seconds (I totally counted). On top of it, it was very quick service, which is what you like during lunch time!

On to the next ramen restaurant! I swear, every week, Jer bear sends me a new one to try. I only have about 16 left to try in Montreal. This is an approximate number.