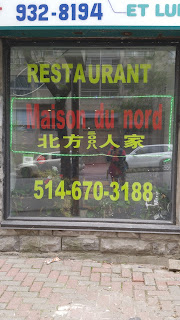 Ma boy Jer wanted to bring me to sumthin' uber authentic so we headed to La Maison du Nord on St-Mathieu where they serve up genuine Chinese food. 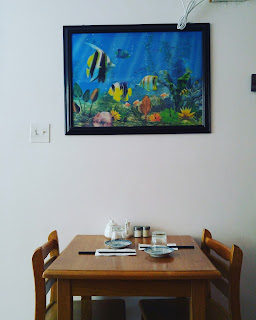 What to say about the place? Nothing, really. To say it's run down would be an understatement. The place is tiny with 30 seats and from the outside it looks even tinier. It kind of looks dirty when you walk in and it seems like they wanted to save $ on electricity because all the lights were off. There were cool holograms on the walls... as in they would've been cool back in 1992. The ambiance was next to nil. Oh and the man that most likely owns it did not speak a word of English (or French), so I thanked my lucky stars that I was there with someone that could actually communicate with him. 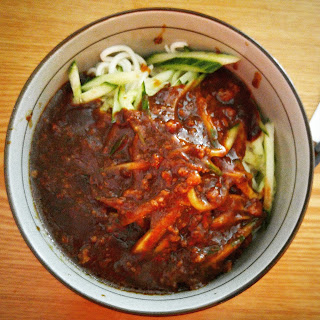 Zhajiangmian OU spaghetti à la chinoise. The noodles were way overcooked and although I did like the cucumbers in there, the whole thing tasted watery and was a bit blah. That's a technical term by the way. Yep. 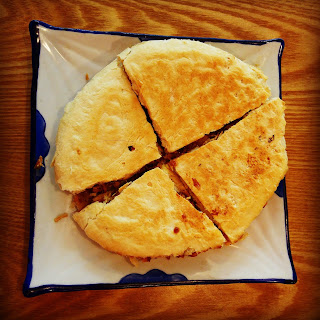 Roujiamo. Is it a sandwich, is it a pancake, who knows! The bread was hard. Very hard. A good hard. You know, like.... I won't even go there :) The bread itself didn't taste much but the stewed pork inside uber flavourful and had a great texture. 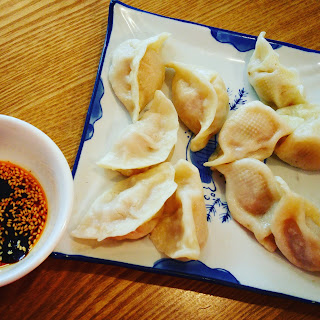 Pork and cabbage dumplings. Oh, how I love dumplings. Marie and dumplings: a love story. They were very tasty, although a tad on the doughy side. The chili sauce went really well with the dish and made me want to eat 8. Hello, carbs. 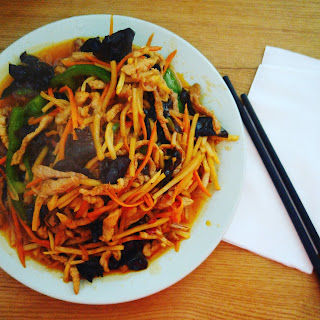 Pork yuxiang. Yuxiang is a mix of spices that originated in Sichuan, which has, since then, spread all over China. You know, like the plague. The basic sauce contains pickled chili, ginger, garlic, sugar and vinegar, with a starch. All that to say it was YUM-MY! It was a bit spicy but not tooo much to make me cry. There were some woodear mushrooms, which I rarely get to eat (like, ever), that tasted almost smoky. Their name suits them very well because it did feel like I was eating wood. But in a good way, you know? Yes, there IS a good way. The bamboo shoots had absorbed the sauce which was just AWESOME. Ya, that much.

Don't even get me started about the service. I can only hear Jer bear in ma head: NEVER rate Asian service. Well, I gots to. First off, well, as I mentioned, I was lucky Jer was with me because I would have had a LOT of trouble, communication wise. It took really long for us to get our food which made us wonder if the dude was working in the kitchen as well as the dining room.

It was good. It was authentic (especially the service :p) . But I don't see myself goin back, especially not without my Asian connection.