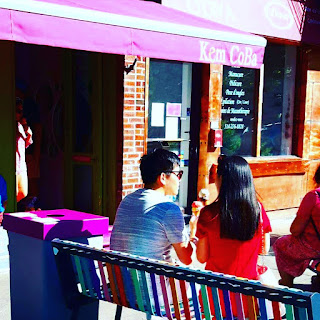 I've been wanting to try this place ever since it opened...or so I thought! They opened in 2011 but they've only been on my radar since 2016! So whhheird!!! I need to get back into the ice cream game. Anyhoot, last week, I had a little soirée at ma man Chris' house with some lovely girls from work and we had some Kem CoBa ice cream for dessert. Lemme tell you, it was the cherry on top of a great night! Not many things better than eating awesome ribs for dinner and ice cream for dessert. Well, except for lobster

There are two chefs at Kem CoBa: Ngoc is a Vietnamese pastry chef that graduated from ITHQ, and her husband Vincent, a pastry chef from France. They make both sorbet and ice cream. They have about 5 or 6 of each and every week they have a special soft serve, half sorbet, half ice cream. Like raspberry sorbet and chocolate ice cream. Ya. Just imagine how awesome that could taste in yo mouth! 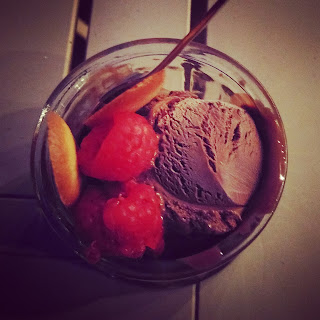 Chris went for the 72% dark chocolate ice cream. Yes AND yes. It was so chocolaty and thick and soft. Mmmmmmmm! The kind of good that when you take a bite, your eyes pop out of your head. Ya, that's right. I wanted more but I have to set myself some limits at SOME point! Of course, Chris added some langues de chat and some sweet raspberries to match the chocolate. Obviously one of the best food matches on earth.

You don't even need to ask me... I'll fosho be back for their soft serve!!!