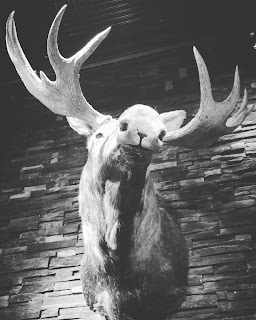 Life is hard and Daiz and I were heading to Brussels to see our home girl Ju on my passes. Yes, I'm THAT person now. We used to be so annoyed at my bro for working for Air Canada and travelling around the world left and right. Well, baby, now it's my turn!
We had quite a while before our flight and Daiz was starving (and I can always eat), so we decided to hit up Archibald because it looked so damn charming from the outside. It was like entering a nice middle-of-the-woods cottage. It was borderline Christmasy for me but I ignored that fact. There were (hopefully fake) moose heads, some tartan placed here and there, big comfy sofa chairs and wooden walls. You know, like a real cottage. Very warm. Very cozy. It was a very big restaurant. Huge, really. 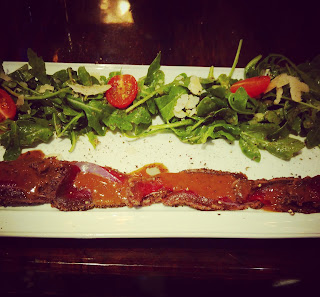 We started with a deer tataki. Fitting, right? See a deer, eat a deer. It was very fresh (which is usually what you want in a tataki) but pepper was a bit too present and I had a hard time breaking down the bigger pieces because of too much sinew in the meat. It wasn't bad, but it wasn't le best. Good thing about this dish was that mesclun (argh) was nowhere to be found, it was arugula. YES! I win! The peppery taste of the arugula went very well with the peppery sauce on the deer. Deeeeeeeeeeer. I just love me some good game meat, you know? OK, I'm sorry, vegetarians. I feel some comments coming my way. 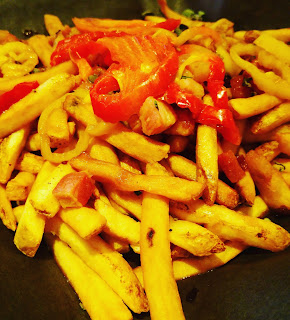 I had the frites cochonnes or dirty fries. Diiiiirty. Between you and I (and everyone that reads this blog), nothing about this dish screamed 'dirty'. The fries were, for a lack of a better word, mushy, the peppers were too big, even for a giant, the lardons were good but few and far between, and there was a pool of grease under all this shtuff. There were two different mayos: regular and spicy. But the fries were so on the opposite realm of crunchy that dipping them just made them even more unpleasant. Oh and they put sage in there. Who puts sage in anything but meat? Who puts sage in anything, for that matter?  Daiz said that it would be the thing you'd eat if you were dying of hunger. Yish. 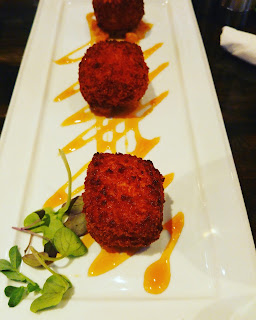 Fondant au fromage. This was good: crunchy on the outside, uber soft and cheesy on the inside. It reminded me of when I was in love with parmesan fondue. Ah, the good ol' days.

Service was good. We were quickly seated at the first table by the entrance which was just perfect. He checked on us, gave us water and was a good little boy. Hahaha! Sorry, but I felt like we were being served by an adolescent.

Well, I'll be at the airport more and more since I get to go on reaaaaaaaaaaally cheap trips with my new job BUT I'll pick another resto next time.