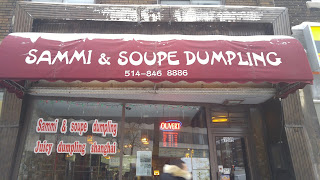 As you know, I'm half Asian (it's basically a fact) and so, being half Asian, I like to hit up some Asian restos. Makes sense. My Asian connection, Jer, told me to go to Sammi soup and dumpling when I asked him where I should go eat near Concordia. And so, I went! 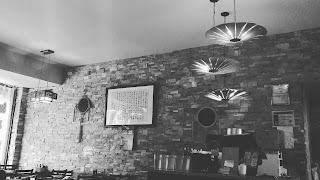 Sammi is a small spot on Ste-Catherine right in the middle of le second Chinatown. Ya, it's a thing alright. They have lots of tables in a small space and have benches that hurt yo ass. Kinda like the old McDonald's. Meaning, DON'T take your time to eat, we want more money. OK, McDo was like that but I'm sure Sammi just took the benches from the resto that was there before. There were a couple people sitting at the back, a couple at the window and a man, that looked quite miserable if you asked me (until the buns arrived) sitting on the ass-hurtin' bench. It felt a bit weird to have absolutely no music and no ambiance. Just not used to it.
Obviously, I was there for the buns. According to Jer, they are some (if not THE) best in Montreal. Well hello there! I like big buns and I cannot lie! Or something less weird. 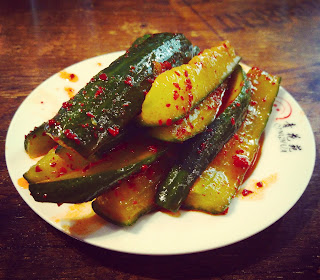 Hot and sour cucumber. This did NOT look awesome. But as the rule goes, it WAS awesome! First of all, this was like 3 bucks. 3 bucks for awesome? Yes please! Huge pieces of cucumber marinated in vinegar and lord knows what but packed with flavor. On top, it was spicy and lovely with some chilies, chili oil and a bit of vinegar. And then, as I was digging, I found more awesomeness in the shape of ginger. WOW!!! Intense and oh-so-good! I'd like some more now please! 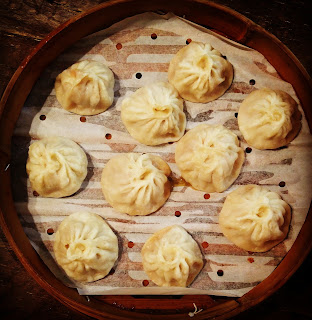 Los buns. Or xiaolongbao (check it: https://en.wikipedia.org/wiki/Xiaolongbao ). OR tiny little heavenly thangs. I asked which ones I should have and she said that if I had never been there, I should have the pork buns. Done!

So, ten buns. TEN! Let's calm down here, people! I obviously brought some home for a friend. Who can eat ten buns? They were just perfect. Totes serious. Perfect size, and perfect level of juiciness, as in they didn't actually explode in my face when I took a bite. The meat was very tasty and very moist (ugh!). The dough to meat ratio was perfect! The sauces that were on the table were also uber awesome (do you even have any idea what 'uber awesome' looks like?). There was this sauce with chilies in it that was just like DSAMN GIIIIRL. Let's just say I was satisfied.

Service was mmmkay. It took my waitress all her might to crack a smile. Come on, is it that hard? I didn't have any sauces on my table so I had to go get em' from another table, which is just fine, but I'm thinking it's part of her job description (yes, I'm harsh). Water was served quickly and refilled not so quickly. Service was fast though, which was great because I needed time to digest before le gym.

I'd totes go back for a bun or TEN!