I would eat banh mi every freaking day if it weren't for the massive (yes, I'm going there) amount of carbs in that bread. DAMN that bread! Baguette Cali is strangely located: in a Thai Express. Except for the fact that both are Asian (I should write 'ish' for Thai Express), they have absolutely nada in common. NADA! I would NEVER eat at Thai Express (Disclosure 1: I've eaten there once, never again. Disclosure 2: also why I didn't want a pic of the resto!).
I spotted this place when walking to and fro the gym. Located on Wellington, it's about 2 blocks from my gym. Ever notice how I always describe restos in Verdun with how many blocks from the Énergie Cardio they are located? Yes, I'm that obsessed. So, you enter the restaurant and you look to the back, far far away. And then you see a little Asian woman and she has the cutest, most welcoming smile. Go to her. Oh, you go to her.

They have other stuff but I was there for dem banh mi. They do have quite the selection so I asked the woman what I should have. She said they are all good. I refused. She then suggested the Spécial Cali. 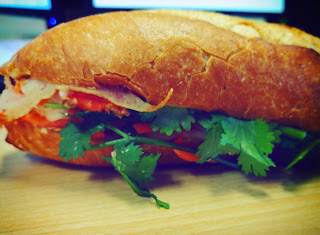 Pâté, ham and pork. Double pig; I love it. Obviously, there was the usual coriander, daikon, carrots and some mayo type sauce. Let's just say that for a girl that watches her carb intake, I did NOT watch my banh mi intake. I pretty much inhaled it. As in 'breathe in, breathe out'. Apart from the fact that there was a tad too much sauce in there, it was amazeballs. That's correct. She had asked if I wanted it spicy. How is that a real question? But seriously. She put some hot peppers in there and as I was eating my way through the sandwich, I found that the couple peppers were few and far between. And then, I hit the motherload. Tears came a-flowin'. But apart from the tears, all the other ingredients were perfect. The slightly marinated carrots and daikon were pretty much out of this world (yes, I'll go that far) and the meat was awesome. I can't say for sure which meat was what but I do know it tasted good. The meat that was most likely pork (I need a meat class) was a tad too fatty for me but added a sh*t load of flavor in there. Oh and there was cucumber that added a nice crunch and some freshness to it all. We DO like it fresh!

Service was fast AND happy! Not much more to say... I had it as take-out.

Knowing myself, I'll try other banh mi places but this place was too good for me not to go back!