Every time I went to an Indian resto, I always went back to the same one: Bombay Mahal on Jean-Talon. Every.Time. And I call myself a restaurant blogger! Pfff! I've been eating lots of Korean food, Japanase food, Chinese food, but Indian food? Scarcely. Yes. I used the word 'scarcely'. And I LOVE Indian food. On top of it, it's really like I'm doing it on purpose to not eat at Indian restaurants, because I have two perfectly good ones about a two minute walk from my place. I really do try.

Alex from work has visited le Palais d'Ajit a couple times and suggested we went there so I was totes in. I had a MAJOR butter chicken craving. And that ain't a craving you shake off. As soon as you enter, you notice that A: there are too many tables and that B: they are understaffed. OH, they are staffed good (I can say that!) for now, but in 10 minutes, when it'll get busy, they'll be in sh*t. And I'm all for 'the more tables we have, the more money we'll make but there's a limit to the madness. It was so tight that I had no room to get out from behind the table at the end of my meal. It was either go under the table and play peekaboo with Alex (which, in hindsight, could've been fun :p), or put my ass in someone's plate. Let's face it, neither my ass nor the people eating would have appreciated that. Thank goodness our neighbours were nice enough to get up and let me pass on their side! 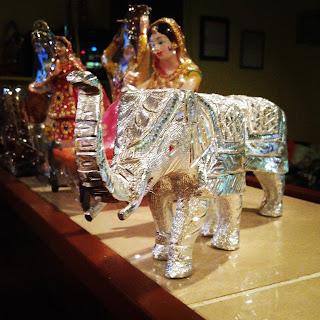 The place itself looks like a lot of the Indian restaurants out there: kind of run down, yellow and brown with some more yellow-ish tones on the walls, a tv or two and some quick and rather bad service. Elephants, and lots of Hindu type-o-things (let's face it, not sure what those things are) hung out on the counter at the far end of the restaurant where you pay. Oh, but this place. This place had somethin' else. This place had Bollywood. Oh yes it did! Alex was right in front of the tv and pretty much had her mouth opened in awe the whole time. Because of this, I almost had my head permanently turned, which is probably how I got this crick in my neck :p But seriously, dem peeps are skilled fo shizzle! That choreography! Those 150 backup dancers! 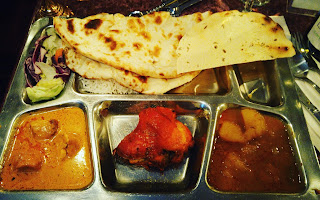 I had what I've had many times: the non-vegetarian tali. Which, I must point out, was about 9 bucks or something ridiculously cheap like that. Basically, a mix of Indian goodness. You've got le butter chicken (for me, the pièce de résistance), the tandoori chicken, potatoes in a yummy stock, rice, salad (oh-so not necessary), nan bread (hello!) AND papadum, my favourite new thing. Let's start from the lower left and make our way clock wise! They were heavy, but that's how I always feel 'bout potatoes. They were bathing in some kind of stock which made them quite tasty. The perfect level of seasoning was used. Tandoori chicken was tasty but was slightly dry. The butter chicken didn't really meet my expectations, sadly. I mean, I LIVE for butta chicken when I go to Indian restos. The chicken wasn't... buttery enough. Not rich enough. Not good enough, damn it! The nan was heavenly. OK, so there's heaven, right? And then, well, there's the nan bread. And THEN, you put em' together! I had to stop myself #carboverload. It was just so fluffy and soft and, well, absorbant! Hahaha! What's better than nan bread? Dipped nan bread! Oh, and there was papadum. It is crisp, very thin, made of flour and chickpeas. This one had fennel seeds in there. It was quite lovely. Especially dipped in shtuff like the butta sauce! The rice was a tad dry and since I was apparently going cray cray on nan, I wasn't gonna eat that much rice #supercarboverload. That salad was there for no reason, like most small, tasteless salads made of iceberg and cabbage. USELESS. OK, I'm OK.

Service was meh. So meh that Alex gave it a 2 but I thought that was a tad exaggerated. First of all they shifted us twice because they had bigger groups coming. Second of all, the waiter gave me my thali while the plate was f*cking burning hot. Thanks for that second degree burn. The wait staff was not  looking very happy. Understandably... they were two for, at some point, about 60 people. I would not be smiling either. As Alex put it: the experience could be summed up like this: awesome Bollywood, very precious water. Hahaha!!! We had to run after the waiter with our hands up to get more. I hate asking for water, and you know it!

I really enjoy Indian food. Not sure if I'll go back because as much as I enjoy it, I do NOT enjoy bad service.