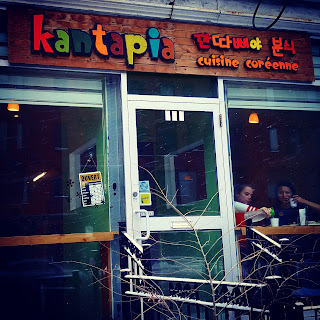 I'm a sucka for good Korean food. A sucka I say! Of course I was going to Kantapia with ma main Asian boy, Jer. You know, the one from the Asian persuasion. This lunch was planned about 2.5 minutes before going, so it was that much more exciting. What? I get excited about food. Especially when I don't think I'm going to the restaurant and then BAM, I am. An Asian resto on top of it. That's a score in my book. 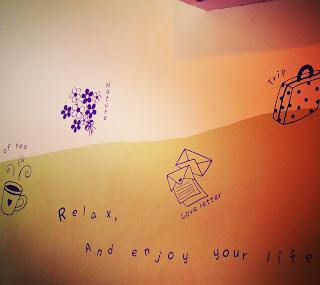 Relax, and enjoy your life :) Kantapia is a small and very busy (especially at lunch time) resto right on the corner of Sherbrooke and Parc. It's that kind of place that when the door opens, a wave of cold hits you. There's also no hooks for jackets. And we were sitting on stools at the bar. A bit awkward and a tad annoying to have a bump under yo butt while you eat. Silver lining is that whilst annoying, it was the only thang warming up my butt. Twas a bit weird that you must go through the kitchen area to go pee but hey. Oh and speaking of the washroom....Let's just not...talk...about it. Point made. 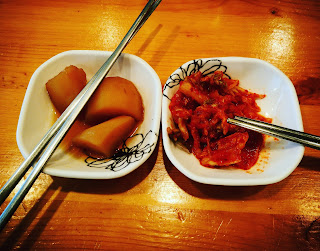 Before they brought us our dishes, they brought us little amounts of kimchi (let me make this clear, I will ALWAYS want a BIG amount of kimchi. ALWAYS). According to Jer, some of the best kimchi he's had. What! Props Kantapia. Props. It was just fermented heaven. Mmmmm. So fermented that I still smelled like it at the gym that night. Hahaha! They also brought  us gamjajorim: boiled potatoes in soya sauce and, surely, somethin' sweet. Seriously, it tasted like maple syrup, but I doubt they would include this in their weekly food order. Let's just say we got another order of both. Way too delicious. 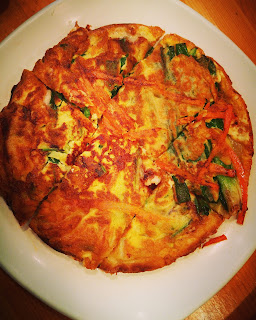 Pajeon! This, ma boy Jer and I had at Haru Hana and it was a tad undercooked. Not the best according to Jer. This, on the other side, again according to Jer Bear (there should be a show called 'Jer knows Asian' OR 'Asia according to Jer), was right on. I felt the same way. There was more seafood and it was less doughy than the other pajeon. It was browned and hot and with that soya sauce mix on it, dsayum. That's right: dsayum. The green onion in there added just the tang I needed and went very well (duh) with the seafood. 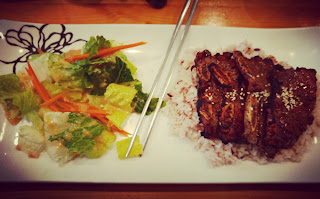 Galbi. Jer told me (forced me) to order this when I was thinking of sumthin' else. This is how it happened:
Jer: Don't have the bibimbap, take sumthin' else!
Me: I think I'm going to have this then.
Jer: No, have that!
Me: But...
Jer: Have that!!!
Me: Ok.
Don't even get me started about that salad. Apart from the miso vinaigrette, there was nothin' goin for it. The ribs, on the other side, were an explosion of flavor in my mouth! They obviously had been marinated for a while in soya sauce and had absorbed all that wonderful flavor. I quit trying to use my chop sticks and just went for it with my bare hands. Went back to my cave woman days, you know.  That meat was tender and oh-so-tasty! The wild rice was perfectly cooked but could have been a bit hotter. Not super fond of cold rice.

Service was good. Simple. They sat us down, they brought us food in a timely manner, they checked up on us. They put water on our table. Good.

Jer told me that in order to become an honorary Asian, which I thought I already was, I'll have to properly learn how to A: use chopsticks (I really do suck at it and always end up using my hands), B: eat the sinew off the bones (he ate mine...ya, we share stuff) and C: accept and eat (I added the 'accept' part) strange meats. Lots of work to be done here. Lots more Asian restos to visit!