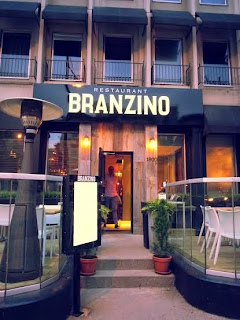 Recently, I was invited to try Branzino, the restaurant located in l'Hôtel Méridien in Downtown MTL. Actually, it was one of my old ITHQ peeps, who is now the manager, that invited me. Let me paint you a picture: when I started at ITHQ in restaurant management, we were around 65 in our class, about 35 or so graduated, half of which have left the business and I'd say about 3 or 4 have managed to get jobs as manager/boss. The rest are like me, fools! No, I didn't mean that. We are either in the kitchen or in the dining room. Ps: although I would love to be ZE boss (cause y'all know I can be bossy!), I do love my job :) I must also mention that this restaurant is at least 50 % ITHQ: the manager, the chef, the sous, the waiter. Talk about surrounding yourself with family!
Getting off track here. P-F invited me to try their new menu before the soft opening (which was taking place this week). How special am I? Yep! 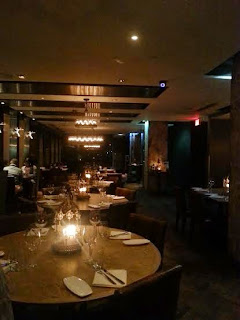 The place itself is located right at the corner of St-Mathieu and Sherbrooke. There's a huge sign in front of it so it's hard to miss. Let's just say if you miss it, you should get your eyes checked, seriously. It seats over 100 people, including the terrasse and has somewhat of a dark décor which actually fits really well. 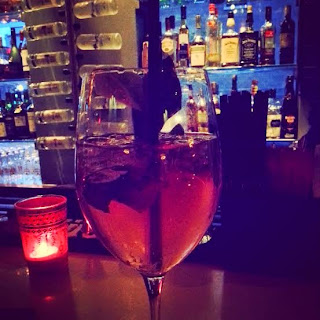 Aight, so I started off with a nice drink, as every dinner should. P-F just read out the names of their cocktails and I chose the one I liked the most: Torreador! Good for me cause it turned out to be a sangria! I loves me some sangria! It was white wine, vodka, basil and watermelon. Hello refreshing! The basil wasn't too present which was a shame but the watermelon was just a burst of loveliness. Mmmmm, I can just taste it now! But not really. DAMN IT!

I asked the chef to decide what I would eat since, well, A:he was sitting right beside me and B:he knows what's good. 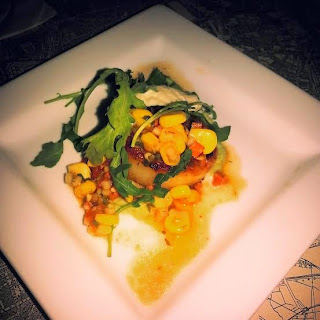 First off, the scallop. Wonderfully, wonderfully done to perfection. Crispy and tender and seared and raw. Basically, just what you want when you cook a scallop. You could just see that lovely char on it just begging to be eaten. Oh and I did! Accompanied by an edamame puree that was nice and smooth and some corn that added a great texture. And a lardon emulsion. AND a maple-y sauce that tasted almost fruity and paired really well with the dish. Hello! Basically, the perfect appetizer. I just might be biased because this is one of my fave things to eat, like, eva. 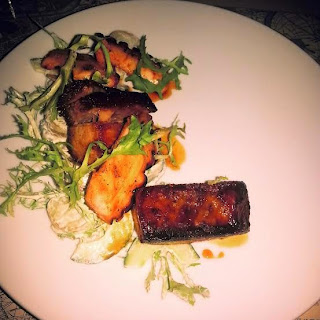 Second appetizer (that's right, I'm special so I get two) was the grilled octopus and pork flank. There were also root veggies which just scream out 'garden' or 'hello it ain't winter anymore'. The pork flank was the best damn pork flank I've eaten yet, in my long long life ;) It basically just melted in your mouth. No need for a knife there! Ah man and it tasted so good! Seasoned just right. The octopus was not as satisfying. I love octopus when it's well cooked but I have such a hard time eating octopus when it's not. It just became really tough to cut and although it had a very tasty charred flavour, the fact that it was so hard and chewy was really what mattered at that point. The radishes were awesome and fresh but the potatoes were just a tad undercooked. There are some things you could eat if undercooked OR overcooked but octopus and potatoes are not in that gang. 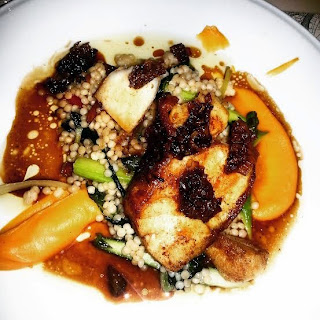 The main course! Man, as soon as this was in front of me, my mouth started watering. Hake (think cod or haddock) was the main part but the star of the dish was surely the Israeli couscous. I think I had only eaten Israeli couscous once in my life. ONCE! I now think my life has been a waste. To live without eating this is just...SACRILEGE! It was like having little balls of goodness in my mouth. Mmmkay, I realise how that sounds, but still. It was like an explosion of flavor! The morels on and around the fish had a great texture (not much I like less than squishy mushrooms) and had pockets full of that lovely jus that was swimming on the plate. Asparagus were not shaved but were thin enough and perfectly cooked. Oh and there was this perfectly silky sweet potato puree. And then, there was the fish. Sadly, it wasn't the star of the dish and it should have been. It was a tad too flaky for my liking and quite dry. Tears ensued. 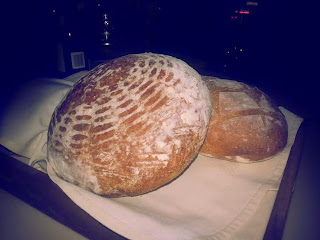 Oh, I must mention the bread! Deeeeelicious, home made by the sous chef who was inspired by one of my teachers at ITHQ, Julie Faucher (whom we all feared and loved) who made everything herself including tofu and taught spinning at 5 am and walked her dogs at 3 am. 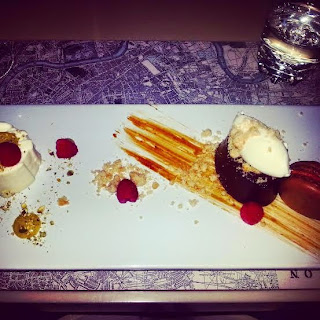 Dessert. I was asked if I was too full and I responded by 'yes but I'll still have it please'. Spoken like a true pig :) This was damn didely good. Just looking at that picture...On the left, a lemon panacotta. Holy crap. I took only a couple bites and it was like I had a lemon in my mouth but not the sour kind. It was a tad on the thick side but I still enjoyed most of it before taking a bite of the next dessert. Ah yes, they called it the chocolate log. And man, if there would be a competition for the most chocolaty dessert, this one would definitely be amongst the top contenders. A crunchy base and a soft middle plus some Chantilly on top just made me see stars. I SO wanted to finish it but just couldn't. And last but certainly not least, a chocolate macaroon. Crunchy enough, soft enough, just like it should be. It was scrumptious.
Service was great, duh. I was sitting at the bar the whole time, chatting with some good peeps I went to school with a couple years ago. Twas nice.
And now, the much awaited scores!
Food: 8.5
Service: 10
I was highly surprised by my meal at Branzino. Highly. Don't know when I'll go back but if I have the chance, I shall!

Betway Baccarat - €100 free bet | FEBCACasino
Welcome Bonus up to €100 with your stake on betway - septcasino A Baccarat that gives you the deccasino chance to win real cash. Betway Baccarat is an 바카라 사이트 exciting