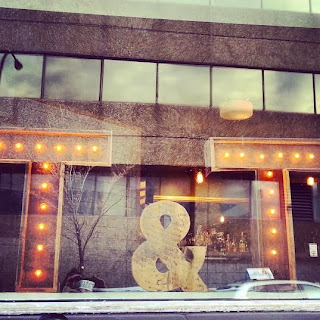 I was invited, a couple weeks back, for a 'blogger event' at T & T Tacos and Tortas on Rachel in Le Plateau. I think they've been opened for about a year and I guess they wanted some good publicity from us bloggers. I just have to say that I'm always in for that. Hint hint.

I went with of my favorite people, my little cousin, who it so happens is only about 7 months younger than I am. Oh and she's taller. Little cousin my arse!

I've been to big openings and smaller openings but never a blogger event. Basically, we got there and I wondered if I had misread the date. There were maybe 2 other tables and that was it. Usually I have to force my way in... kinda :) Turned out great in the end: more time to talk to my cuz and my fellow blogger Val (from Juliette et Choco)! Plus, hello, more attention from the super cute waitress! 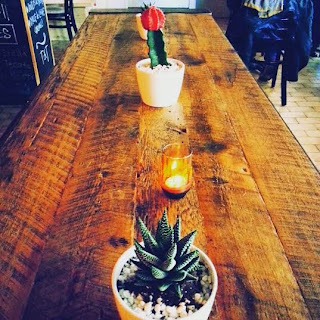 Gen had been there a couple times since her office is about 3 steps away and knew what she liked. I, on the other hand, know I love tacos but didn't know what to pick on the menu. Actually, I must admit that in the end, we totally forgot about the tortas! Bad blogger, BAD! 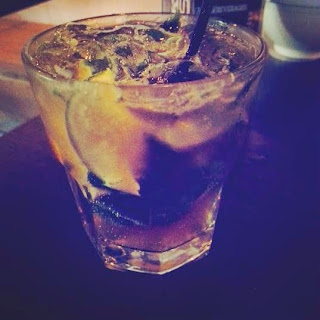 But I obviously didn't forget about my drink! We could order one and then pay for the rest: good deal! I had me a mojito. But it wasn't just any mojito, it was the BEST mojito I've had... EVER. Ever, people! You know, minty but not too minty, sweet but not too sweet, perfect but oh-so-perfect? Ya, that was it. Good God I'd want one of those right about now!

We wanted to get an order of every taco on the menu (there are 6 kinds and 4 tacos per order) but the waitress strongly suggested that we calm the f*ck down. SO, what we did was narrow it down to 4 and got 2 of each instead of crazy 4. But first, there was the tortilla sopa! 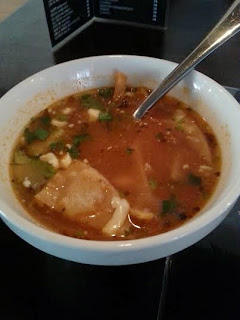 This was a tad watery but it was the only bad thing about it. The flavors were great, the avocado was oh-so-good and creamy and there were little islands of sour cream that just popped in your mouth! Coriander was also present and as always, appreciated. I just LOVE coriander. I remember, when I was in my 'Découverte des aliments' class at ITHQ, we had to make something and present it in front of the class and then the students would eat it. I made coriander pesto. Because I love it that much. The tortilla itself was ok but could have tasted more. 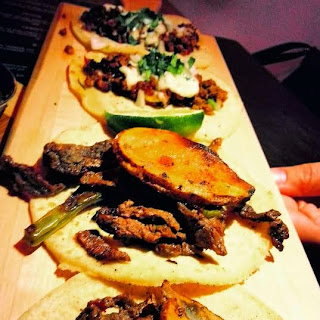 Beef with grilled cactus taco was a tad disappointing. Basically it was thin sliced marinated beef with some onions, and grilled cactus. The cactus was special, cause seriously, when does one eat cactus, but the meat was dry. So dry that we needed to add some lime juice but to our very dismay, the lime wasn't juicy! *Sniff* There were some great salsas on the table that helped out: salsa verde, and two salsas rojas including one hot one that y'all KNOW I was licking off by the end of dinner.


The other tacos on this plate were the chorizo ones. You can add cheese for 1$ but when it's free you don't even need to think about it--just add the damn cheese! Unfortunately, they weren't much better than the beef tacos (enter sad face). The meat was also a tad dry--although not as dry as the beef. The coriander saved the dish-ish but again, we needed to put lots-o-salsa on it for it to taste good. Hey, at least the tortillas were good: crunchy but not too much, and flavorful! 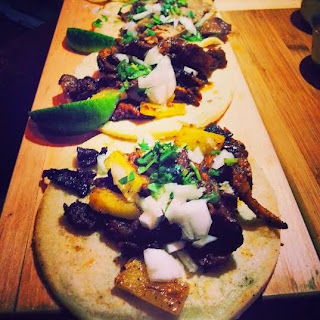 Tacos el pastor should be renamed 'tacos al Maria'. Mmmkay, I see how that makes no sense but they are my fave. Just having pineapple on a taco makes my mouth water. This one was very nice: the juiciness of the pineapple and the tang of the onions made it heavenly. The pork was nicely cooked and well, you know, the coriander :) This was our fave by far. The last pair of tacos were the carnitas: pork belly, onions and coriander. The meat itself was a bit tough and chewy and lacked in spices. I love pork belly but this was a bit of a let down. 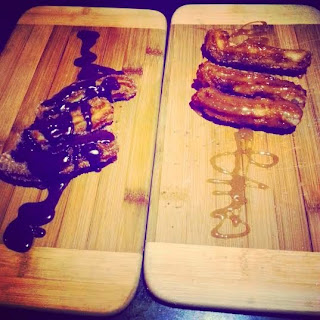 Churros!!!! The tacos may not have been up to par but the churros were riiiiiight up there! A set with chocolate and the other with dulce de leche, they were cinnamony, crunchy, yummy goodness. I was suddenly back in Spain.


Again, food may not have been extraordinary that evening but the service surely was! First off, there was the hotness of the waitress, of course. But apart from that, we always had water, we got our drinks in no time and she explained the menu to us and what we should order.

I think I'm gonna be bold here and say that I'd go back. I feel like this place has a lot to offer and that maybe, just maybe, it was a bad night.