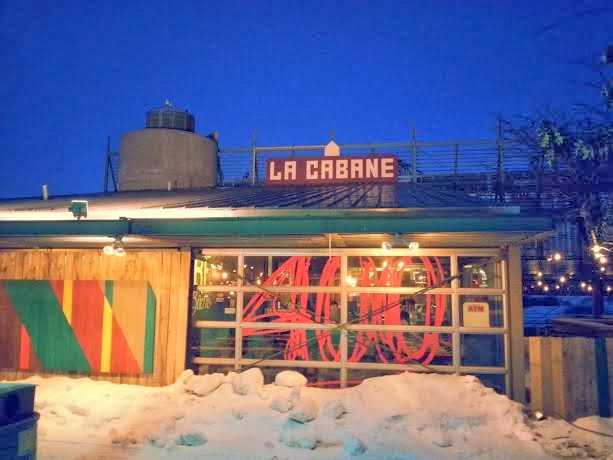 I was invited to try Apollo's La Cabane, one day before the official opening. That's cutting it a bit close I think, no? I bet most of the other people got invited before and then they were like, wait, we need more people! Hahaha.

Anyhoot, I got there and was offered a beer cocktail. I told the bartender that I really DID NOT LIKE beer (like, at all.... like I can't even take a sip) and she offered me, womp womp womp, a fruit cocktail. Really girl? I see that you have a bunch of bottles of alcohol behind you; you could at least put a shot of somethin somethin in there, no? No. 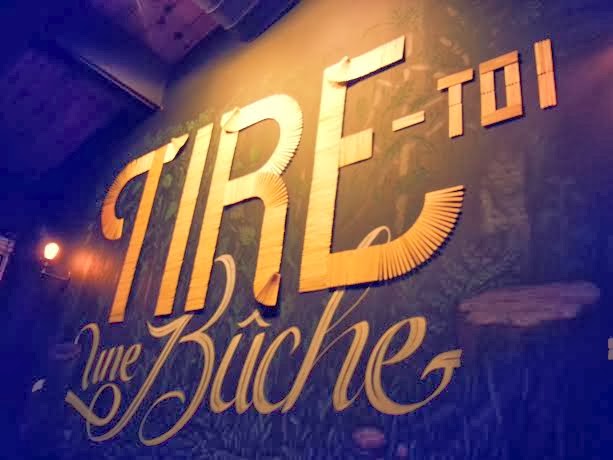 So as I was 'enjoying' my fruit cocktail, I looked around. The place had somewhat of a modern cabane à sucre feel, with long wooden tables that you share with lots of people you don't know. After my drink, I was invited to go upstairs and, as downstairs, it was all wooden, communal tables with some writing on the wall and wooden lamp fixtures. Nice. 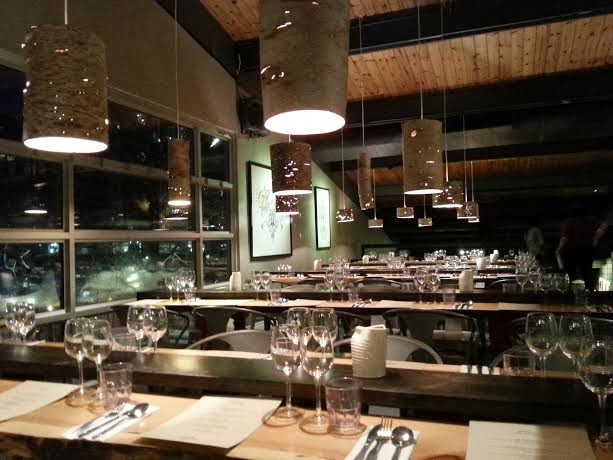 I was seated in front of a desert blogger (and pastry chef) and the dude from Montreal Food Pictures (funny guy) and beside somewhat of a food expert...I didn't really get what his job was.  Anyhoot, at first, conversation was a bit meh...I realized I don't really like going out alone to restaurants, especially when I'm sitting beside people I don't know. But then the wine came flowin' and conversation obviously got easier :)

They were waiting for all the tables to fill up before serving the first course. It took about 50 minutes. Pffff. Thank the looooord they decided to start after around 6 out of 10 tables were full. And since we were the first table that was full, we were the first ones getting served! Celebration! 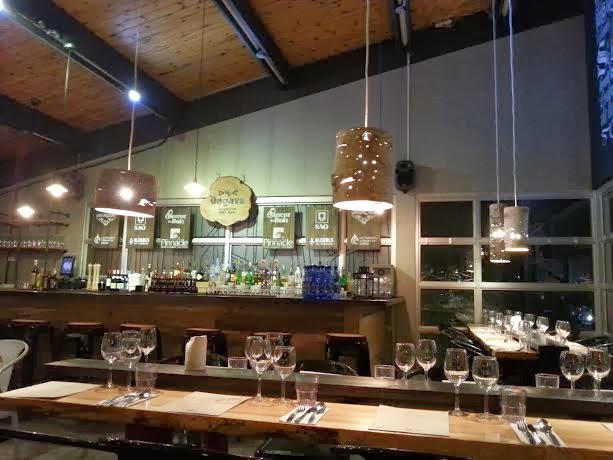 We were to have 5 courses. Those 5 different courses were presented by 5 different chefs that have participated in the past 4 years of La Cabane: Helena Loureiro, Marc-André Jetté, Martin Juneau, Danny St-Pierre and Patrice Demers. I had been to Helena's restaurant in Old Montreal, aptly named Helena and looooved it, I had seen a couple videos on Danny St-Pierre at ITHQ a year or so again and found him quite the interesting chef and I had heard of the other three. Needless to say I was a tad starstruck when I saw them all sitting at a table! My reaction: 'hihihi, oh my gawd'! Yes, I'm THAT loser!

On top of this, we were to have white wine for the first two courses, red wine for the third and fourth and cidre de glace to go along with the desert. 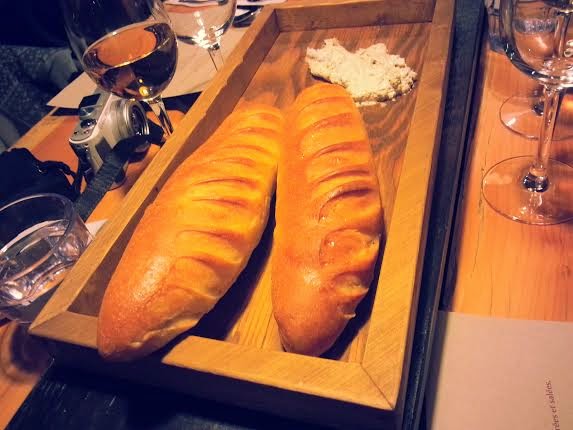 First, we were treated to warm (oh yes!) maple bread (double yes!). It was so soft and yummy! It was accompanied by cumin butter. Or cumin with a tad of butter. WAY too cumin-y! But the bread was marvelous. It was so marvelous that later on, we asked for more but they said that the bread was 'rationed'. Ok then. 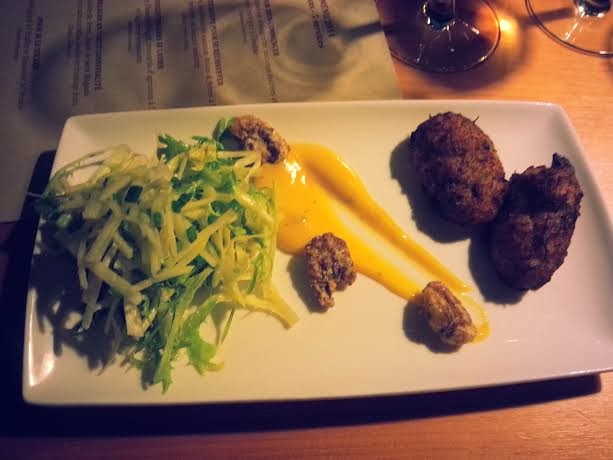 First course was the cod croquettes with a mustard and maple aioli, maple roasted pecans and endive and cucumber salad. This was good. Why? Well probably because Helena makes a mean cod croquette. It was a tad disappointing to know that she had served the same croquettes the year before though. Anyhoot, the salad was refreshing but had large pieces of chicory that did not fit into my tiny mouth and the pecans were good but overly sweet. On the other hand, the aioli was marvellous, smooth and yummy, and the croquettes just melted in your mouth. That's what I look for in a croquette; the melting in the mouth factor :) 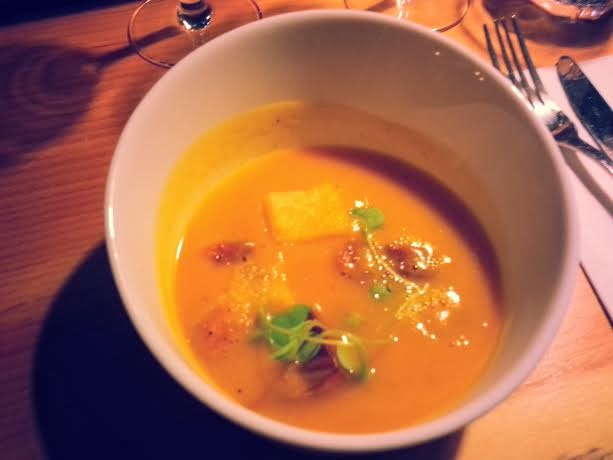 Second course was a smoked squash soup with maple salmon 'candies' and a hazelnut dipped brioche. Oh man, this did it for me. A regular squash soup=good. THIS squash soup: oh-so-damnedidamn-good! The flavours and textures were all there: the soup itself was smooth and well seasoned, the little cubes of salmon were a nice welcomed surprise in my mouth, the soft brioche just exploded with flavours and the harder croutons just gave it some texture. Good, good, gooo-hoood! 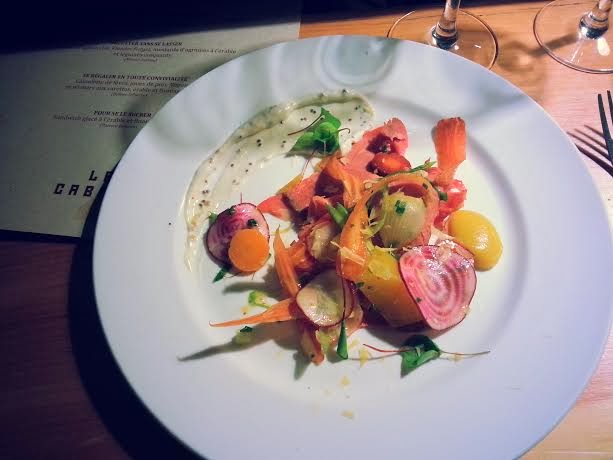 Third course was disappointing. It was lamb ham, crunchy vegetables and a citrus mostarda.  First off, let me mention the only part that was pleasing: the presentation. It was so pretty! Most veggies were cut with a mandoline which made for a good lookin' plate. Aaaand that's it. Crunchy carrots, ok. Crunchy beets, NOT ok. The meat didn't taste like anything except when you dipped it in the mustard/mayo combo that was on the side of the plate. And don't even get me started on the citrus mostarda. What the hell WAS that? It tasted like the filling in a lemon meringue pie. It had a weird texture, it was overly sweet and just did not go with anything on the plate. 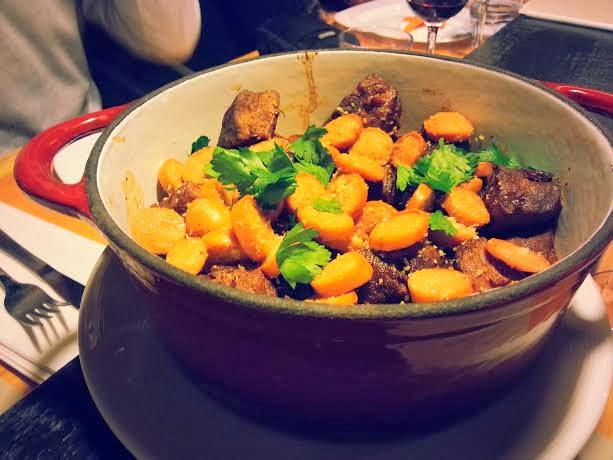 Bean, carrot wieners, bean, maple and cheese cassolet. It was nice; they put the dish on the table and we were to serve ourselves. The waitress said it had coriander on top to add some freshness buuuut turns out it was parsley. The meat was nice and juicy, the wieners, which I never ever like, were actually quite pleasant and the beans were really good. They weren't overly cooked and mushy like they tend to be. And the parsley DID add some freshness! 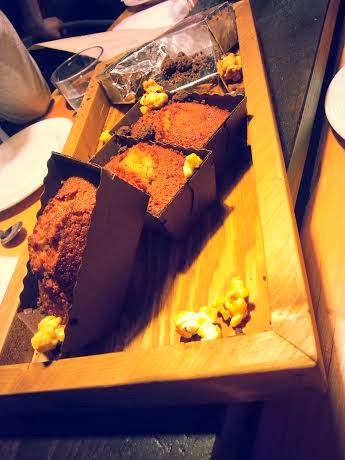 The desert was a maple ice cream sandwich and a maple financier. 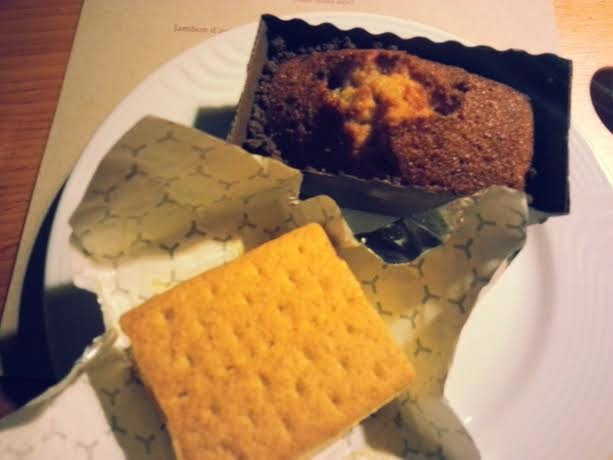 The financier didn't taste like much. It was dry and meh (technical term). The ice cream sandwich brought me back to my ice cream sandwich eating days :) It was very maple-y. Unfortunately, all in all, desert was a tad disappointing.

Service was great. Our waitress was cute (bonus point there!) and when she didn't know something, she'd go check and get back to us promptly. We always had water and she tended to our needs. Us blogger folk are hard to please :p She explained the wines and the plates very well (except for that coriander mishap!). We got to personally meet Apollo who came to introduce himself and then his chef. Nice.

It was very nice to try for free but I don't know if I would have been this happy if I'd payed for it.