An old friend of mine (I'm talking more than 15 years here!) and I were looking for a fun resto to eat lunch at last week. I thought about Sesame right in front of Atwater market. It's close: about a 13 minute walk from my place! 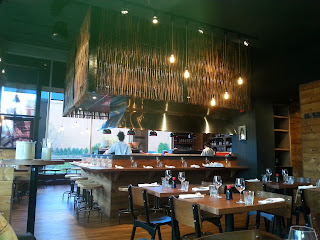 The place looks nice; I've always passed by it in the evening time and the dim lights make for a cool looking space. It was kind of wood cabiny.

Anyhoot, we got there and the girl that was behind the counter told us to just order there and we'd get served at our table. Weird. I guess daytime is not their busiest time. I had the pad thai--it had been, it seems, YEARS since I had had a good pad thai. The shrimp were very tasty and the whole thing was very peanuty. It was a tad on the sour side though which was a bit unpleasant. Still, it was a good portion but not the best pad thai I've had by any means. 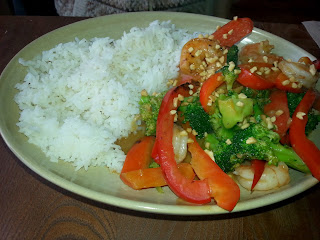 My friend had the shrimp (it was somewhat of a theme here) with peanut (again, theme!). It was not too sweet which we liked. The veggies were ok. The jasmin rice was too sticky but there was a good amount of sauce.

What was fun was that we could serve ourselves an array of water: ex: strawberry or lime water. That was a nice touch.

I won't even comment on the service since it was practically nonexisting.

I'm not going to say I regret trying this place but we should have gone somewhere else perhaps.