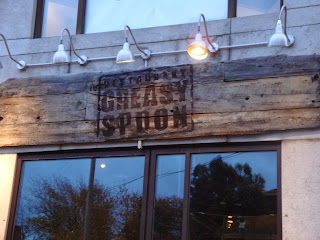 My friend Lea had a coupon for this place and so invited me to eat there oh so graciously! Yay!!! Me loves food.

At first, with a name like 'Greasy Spoon'.... you're thinking greasy food right? Nope! It's decor suggests more like comforting food: it's kind of like you are in a chalet or a lodge with wooden everything, skis and animal heads and skates! I really liked it! 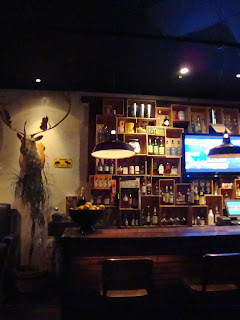 The place has about 60 to 65 seated places plus about 10 at the bar and plays popular music. It has a nice big terrasse that was not in use because it was getting cold. It's very dark in there. Like... VERY dark. As in you have a hard time reading your menu almost. Anyhoot, what was fun is that we got there before the dinner rush so we could choose our table! 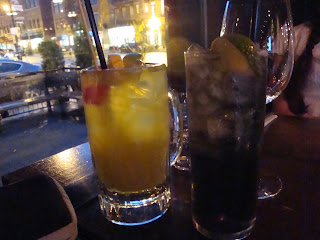 We started off with drinks... DUH! Lea had a Purple Rain  which turned out to be very grapy and dangerous---because of all the grape taste... you had a hard time tasting the alcohol... therefore dangerous! I had the I Love Sangria  because, well, let's face it, I just loves me a good sangria! It was good and fruity AND winy but not the best I've had. 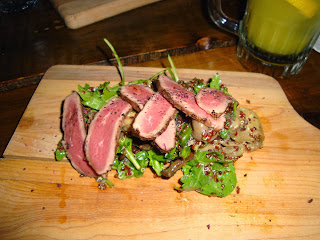 And now, the food! As an entree, I had the duck tataki. It was OK. Could have been more tasty, as in they could have infused more flavours in there. The mushrooms were dsamn good. The salad that came with the duck was nice and refreshing. 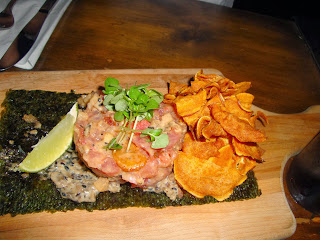 Lea had the tuna. Ah, tuna! I would have chosen the tuna but I didn't want to take the same plate. It was oh-so-tasty (we almost licked the plate), with a great peanut aioli. The chips that came with it could have been crispier though. 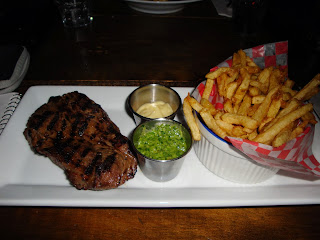 As for the main, I had the Angus steak (I wanted to compare with L'Atelier d'Argentine!) with chimichurri, mayo and fries. The fries could have been crispier (mmmmm soggy fries!) but were homemade so at least that was a plus. Half the meat was tender and the other half was incredibly chewy. Again, mmmm chewy meat. NOT! It was well seasoned though. The chimichurri was actually really good and had parsley in it amongst the other herbs. It was very tasty! The plate was cold though so the meat became cold in 3.5 seconds. Why oh why don't restaurants know by now that when you serve something hot, the plate's gotta be hot too? 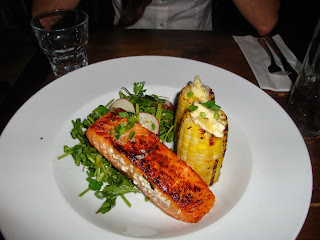 Lea had the salmon and corn. She was really hoping that the corn was not going to arrive on the cob but hey, that's exactly what happened! It was actually good corn (we know that these days, the corn ain't the best) and not pasty at all. The salmon itself had crispy side which was well appreciated by both of us and the flavours were very good. The watercress salad was kind of meh and just should not have been. It didn't add anything to the dish. 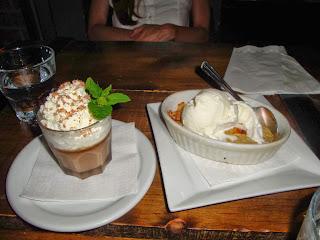 As for the desert, I had the After Eight mousse which was de-wait for it-licious! Topped with whipped cream, it was the perfect desert! And it wasn't TOO minty. Lea had the cookie with ice cream which was, as she described it, warm goodness.

As for the service, it was great. Our waiter was very present from start to finish. Water was always refilled and we were asked how we liked every dish.

A great new place to try, especially the tartare! Dso it!