After a long work day, I decided that I would get some take-out. Kam Wing is not too far from my place so I decided to go there! Warning: flash review!!!

I had the general tao combo that comes with either wonton soup or sweet and sour soup (I chose s+s) and either a spring roll or little peanut sauced dumplings (had the dumplings, of COURSE!). 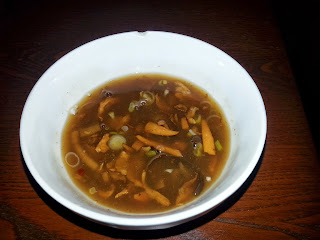 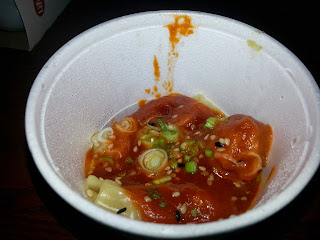 Tiny dumplings with peanut sauce
-yummy in my mouth!
-thick and nice!
-very tasty and full of flavour
-so good, I ate three in 2.5 seconds 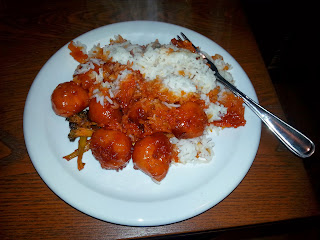 General Tao chicken
-Tasty sauce
-Dry-ish chicken
-Liked the fact that it's in a ball
-Rice was nice and sticky
-3 tiny pieces of brocoli (so if you're looking for veggies... mmmya... good luck)

And the score for food: 6.5.
Could have been higher but damn that soup!

A nice take out place. One of those where they sell everything asian from chinese to sushi. Ha. Worth a try if you have a small budget! (this cost me, with taxes, a mere 11$!).