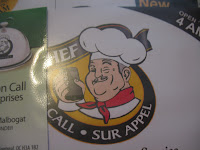 I got an invite to try Chef on Call and of course I had to take it!!! It seemed like a great place to order from especially when you're a student working all hours of the night! These guys are opened till 4 am most nights and serve good homemade kinda food. Just what you need after a night of studying!

So, Gabriel Malbogat, one of the co-founders of Chef on Call came to my door one day last week with a plathora of food :) I had chosen the vegetarian meal so I had five different dips, a spinach, cranberry and goat cheese salad, a grilled veggie wrap, the vegetarian burger and fries, sweet potato fries and onion rings. Oh, and a freaking huge chocolate chip cookie. So basically, I had food for 3 meals :)

Let's talk about the service. Well, it was wonderful! Gabriel was very courteous and told me about what I had in front of me, gave me the press release and a bunch of Chef on Call stuff. I tried to give him tip for the delivery but he refused many times. He finally took it when I told him he could just give it to the cooks.

Alright, let's get to the food! First off, the different sauces.

1- Chef on call: Very nice even if on the thick side. It was actually a bit sweet. Paprika was very present but welcomed. Our favorite.

3- Garlic mayo: Isa found it too garlicy but if you know me, you know I loves my garlic. So I liked it although I felt that the mayo was way too thick.

4- Garlic dill: I'm not much of a dill girl but Isa who liked dill more than me, found it OK. The dill was a bit overpowering. Our least favorite.

5- Honey dijon: Unctuous but a tad too thick.

And now, the salad. We found it to be a great mix: the cranberries were great in there and we all know cranberries go well with goat cheese! And, well, what's healthier than spinach? :) The leaves were HUGE though; we almost had to cut them. But it was a pretty salad. The vinaigrette, I thought, was a bit overpowering, but Isa liked it. It was pretty much olive oil and some herbs.

Ze burger now. Mmmm, this was very tasty. It was a vegetable and legume based patty which was so dsamn good, some greens, onions, tomato and garlic sauce. Ah, garlic sauce. Obviously, Isa found that they could have picked a different sauce but I loved it. I did smell like garlic until the next day though. But the patty was very tender, well seasoned, moist and lovely. I'd order that again.

The wrap. As soon as you unwrap,,, the wrap, your nostrils are filled with yummy smells. I love grilled vegetables and this was right up my alley. The goat cheese made the wrap what it was by tying all the flavors together and making it creamy and silky. Oh, there was also a nice balsamic glaze that gave the whole thing a nice kick.

The fries and the sweet potato fries were good and well seasoned but not crunchy. Isa didn't seem to mind but for me, fries need some kind of crispiness. We both agreed that the onion rings could have been crispier as well.

Now, the cookie. WOW, what a cookie! It was soft and was actually a bit raw in the middle which I loved. We're talking about a girl who used to eat raw cookie dough. Although not healthy, it was damn good! The cookie also had a lot of chocolate chips. It's rare that I actually eat cookies so when I do, I want it to be worth it.

All I have to say is that back when I was a student and all my peeps went to McGill, we ordered from Alto's (haha, remember that place?) many nights a week and that if Chef on Call would have been there, we might possibly would have prefered that!!!

ps: They use biodegradable  packaging AND electric scooters!

thanks for the info!