Sylvia and I had been walking for a while and therefore starving. We were on Roncesvalles ave (try to say that 5 times in a row) right beside High Park in Toronto and we found this little gem of a place. 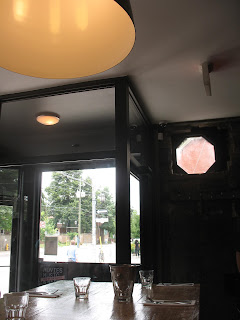 This restaurant is not too big, not too small, with around 40 seats. It has a nice feel to it, with picnic tables, a bar and some higher tables. Lots of wood in this place which makes it quite homey.

On top of it, as soon as you sit down, you can eat! Eat what you ask? Well, the big arse bowl (more of a bucket) of paprika and cinnamon sprinkled popcorn. SO GOOD. I don't even care if someone else had their hands in there, it's too good! And, well, the bucket is full so I'm thinking no one has :p

We started by ordering drinks. Duh. Had the Barque Caesar and do I ever NOT regret getting it. One of the best drinks I've ever had. Seriously. And as most of you know, I've had quite my share of drinks, hehehe! On top of tasting great, it had this lovely pickled asparagus in there which added just a touch of brininess with a salty and spicy side to it. The star, OH, the star was of course the candied bacon rim. Holy bejesus. It was HEAVEN-IN-MY-MOUTH. I'm not even kidding. It was passed caramelization, it was freaking candied. Think how much bacon is oh-so-good and then multiply that by 100.

As for food, I had the smoked Barque burger and Sylvia had the Barque brisket. Sylvia said this about her meal: 'it's the best thing in the world'. The bread was moist, light and fluffy, the horseradish and the mayo were great and the whole thing was just oh-so-good. The slaw was sweet enough and the fried onions were there to balance out the whole thing. And then, she tasted mine and she said holy shiz, I didn't think it could get better than my brisket. Oh but it did. Did I mention that I had candied smoked bacon in my hamburger as well? Oh yes I did! Plus aged cheddar, caramelized onions and bbq sauce. So, basically, heavenly. Obviously, the bacon made it great. The cheese was just salty enough to balance the sweet side of the bacon, the bun was airy and fluffy and the meat was perfectly cooked. The mayo was spicy and the pickle added a fresh touch to it all.The fries were homemade, crispy and well seasoned with a hint of paprika and cinnamon=so good! 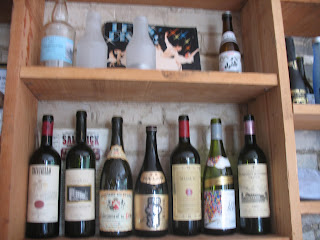 As for the service, it was wonderful: the waitress even attempted to fix our slightly wobbly table. She had a smile on her face from start to finish.

So basically, the key word here is HEAVENLY. Go there and please PLEASE order the Caesar and the burger! You will not regret it, I assure you!