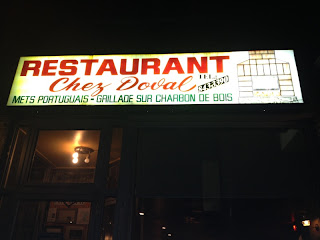 This little Portuguese restaurant is located about a 3 minute walk from my old place, in
little Portugal… ah, the memories! I had been once, many many years ago with my
parents. To be honest, I didn't remember anything about it. So I went back with ze wife
and two of her friends.

This restaurant is very authentic. The owners are Portuguese, the barman's Portuguese, the
waiters are Portuguese, and everybody's mama's portugese. You know what I mean? :)
Stucco walls and wood paneling are an integral part of this restaurant. The place has two
rooms separated by a little hallway. Portugese music is being played by a dude with a
guitar in the other room. The room we were in was very small and it seemed like there
were too many tables+chairs. I understand how you have to have as many seats available
for your clients to make as much money as you can but come ooooooooonnn, I could
have eaten off the next table's plates!

Anyhoot, we got bread (that was dry and cold) quickly with little, I don't know how to
explain it... garlicky pieces of bread that were harder but full of flavour. Anyway, bad
explanation...but they beat out the bread by a lot. 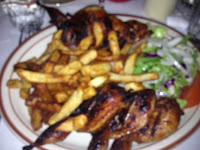 The menu was a tad too huge, too many choices to choose from. I'm always happier
with a simpler menu. They had the Portuguese classics like cod, sardines and chicken, of
course! I had none of those. I decided to have the quail. Wait, no... SIX quails :p. Ya,
that plate was huge! They were juicy and nicely charred. I don't remember who ordered
what but the octopus was squishy.. and there ain't nothin' worst than that! The piri piri
chicken was very spicy... actually TOO spicy. And I an handle spicy. Oh and the soup

was homemade. Like TOO homemade. You know what I mean? Oh and the plates were
cold. COLD! 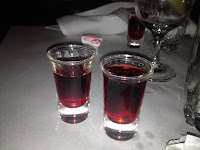 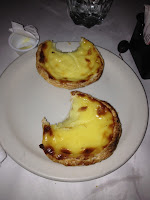 We had pasteis de nata for desert. This was our go to desert when we were in Lisboa. I wasn’t as much of fan of it as ze wife but I still liked it. This one.. meh. It was OK. It was cold and not as tasty as the real thang. It’s better warm and with a pinch of cinnamon. YUM! Anyhoot, after these OK pasteis de nata, they gave us a shot of porto. That woke me right up ! It was a nice little gesture.

The service was ok but not exceptionnal. The waiter was pleasant at first and then, as
more and more people came in, his smile faded a bit. He was also the only waiter for
about 40 people. He didn't serve the wine well either. Grrrr. There was a guitar player in
the other room that finally came in our side of the restaurant near the end but instead of
singing portugese songs, he sang québécois songs. Why oh why? Also, at the end of the
night, sharing the bill proved to be so difficult. That got annoying really fast.

Maybe it was a bad day…I really want to believe that Chez Doval is better than this. It
really does remind me of Portugal. And I loves me some Portugal :p