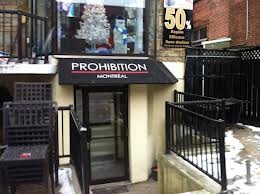 Third time's a charm when it comes to Prohibition. Actually, I believe it was four. We tried to go there on many occasions only to be told that there were no seats or they were closed or it was a holiday. Sheesh! But we did end up going 2 weeks ago. This place, in the heart of Monkland boulevard, is always full. ALWAYS. I think we reserved 1 week and a half in advance for this, so it had to be good!


The place itself is in a half basement, kinda dark-ish, with a piano in the corner and about 60 seats. The ambiance was good: a lot of people, a lot of noise, a lot of forks and knives hitting the plates :) And this is not your normal breakfast place with eggs and bread on the menu; they have huevos rancheros and, wait for it, fried chicken with maple fried challah french toast. They also had eggs benedict with garlic yogourt! Ps: don't order the juice or the hot chocolate... they are store bought and really not what you'd expect from a good breakfast place. Oh, they also don't serve alcohol. Goodbye mimosa!

After trying to get there so many times, you start looking at the menu and so we all knew what we wanted right from the get go. I actually was debating between the huevos rancheros (they looked damn good) and the fried chicken. The latter won. Ze wife had the lemon ricotta pancakes with blueberry compote and sweet bacon.

Wow! If someone can fry chicken, it's the cook at Prohibition. Yum yum YUM! Deeeee-freaking-licious! Man was that ever good. Can you tell I liked it? It was moist and well seasoned and HOT. I took tiny bites to make it last longer. OK, perfect bite: piece of chicken, piece of french toast dipped in maple syrup. Tiny food orgasm right there. The chicken was so good, the bread so soft and well, there ain't nothing wrong with maple syrup!

Ze wife's pancakes were good and soft and blueberry-filled but the star of her plate was the bacon. Baaaaacon! I liked it so much that, even though I was full, I took a side order of the lovely stuff. Thick, melt-in-your-mouth bacon goodness. I could eat that bacon 3 times a day, 7 days a week. But I won't. That would be wrong (yet, so right!).

The service was so not up to par compared to the food. First, they seemed to be understaffed. Second, the waiters and waitresses were running around. Third, they were not that polite and fourth, our waitress kept on forgetting stuff. Like my friend's plate. Like my precious bacon. Like my watered down hot chocolate. Two different waiters also attempted to take our plates away before we were done and we had to tell them to back off! If I go back, it won't be for the bad service.

Food: 8.5 Don't get me wrong, my plate was perfect, but I tasted ze wife and ze friend's food and it wasn't AS good. But that bacon.... that bacon!

Service: 5.5 They forgot stuff and they were rude.

Definitely go with friends for weekend brunch. Have the fried chicken with a side of bacon and you'll be in heaven.