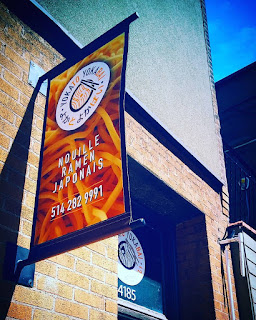 I always want to try new and exciting AND awesome new restaurants. Especially of the Asian kind. What? Guys, y'all should know I'm totes half Asian! Or I'd like to think so. Maybe in another life? Anyhoot, I was totally excited to try one of the best (or THE best?!!!) ramen houses in the city.

My token Asian friend Jer suggested this place a couple weeks back and I was OH so damn excited. That's right, THAT excited. 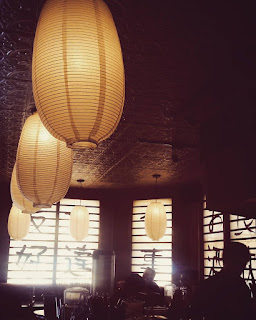 You get in and it's a great looking isakaya with a bunch of lanterns and a bunch of cooks behind a bar. It was small and cozy looking. If you look really hard, you can see two other friends in the back that were there because I had mentioned it on facebook :) Ah, social media.

We sat in the third room on the main floor (apparently there's an upstairs too, what!). We were welcomed by a very nice guy who you just know could become your best friend and go out on the town with you. But first things first: food. The menu is really simple: 4 entrées and 2 kinds of ramen (+1 veggie----but dat don't count---OK I'm kidding. But not really.) You can choose between the spicy ramen broth and the non-spicy one, with pork or chicken. I had to have the 'best' one: spicy broth with pork. Ya baby! 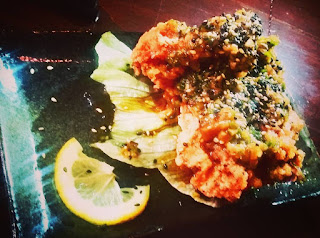 Karaage chicken. I've eaten karaage chicken before. Quite a lot of many times (yes, that's right). This was by FAR the best. It was lovely and crunchy and moist (God I hate that word), oh and all that chickeny (new word alert) goodness.With a sake, mirin and lemon sauce, this dish could have seriously kicked some karaage chicken competition butt. The chicken itself also had a lemon flavour to it and that was awesomeballs. Ya, awesomeballs. Oh and sesame and ginger too. I love that flavour profile. loves it. I don't know how, but they actually managed to make fried chicken taste fresh. What up. 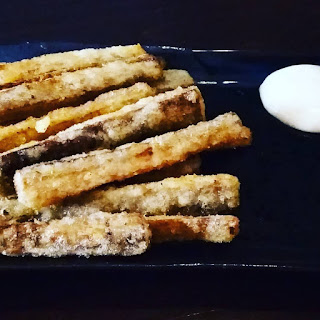 Gobo fries. Or burdoch root. It was fun for once to not eat the same old fries that we're used to! It was nice and hot and crunchy but I found that it could have been cooked maybe for a few minutes longer. The sauce was somewhat of a mixed mayonnaise that went really well with the fries. Wait. Mayo and fries? Big surprise! 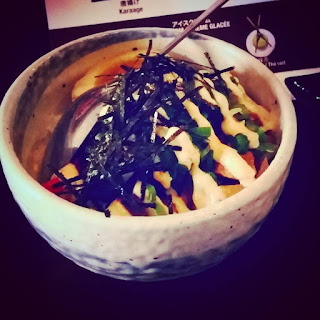 Chasu-don. This was one of my faves. Pork with veggies, seaweed and rice. Oh, and an egg, of course! Every dish should include an egg I say! The rice was so creamy and soft and all that goodness, the egg was unctious, the pork was melt-in-your-mother-freaking-mouth good. The seaweed gave it a bit of a salty side and the green onions gave a little kick to it and all in all, the different tastes came together in one big bang. Taking a bite with all the components of this awesome dish was like a little piece of heaven in my mouth. 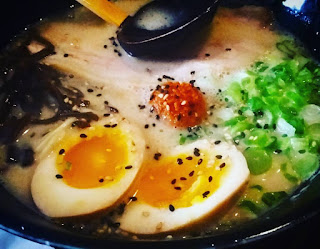 Ramen: pork kara-miso. Look at that heavenly dish. Just look at it. And then look at it again. Basically, kara-miso means spicy miso. You see that red ball right there? That's the miso ball. OR ball of oh-god-yes I should call it. It was pretty much an explosion of goodness. That kind of salty, kinda thick, very umami (that's right, I'm using the 'u' word) kind of explosion. The broth was thick and creamy (they make a 12 hour pork bone broth that requires lots of care and affection--yes, I'm still talking about food) and had so many levels of flavors. The noodles were perfect: not tooooo soft but not al dente, just perfect. The pork was very fatty but that's what makes everything good. It literally melted in my mouth (yes, I like this expression). The green onions were a bit tangy and obviously went really nicely with the dish. The egg was perfect. It was THE perfect egg. Just so smooth and warm and that yolk. 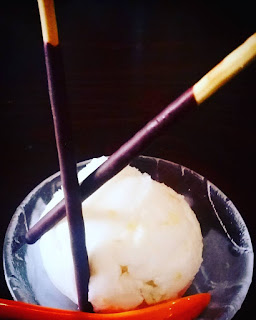 Yuzu sorbet. Holy effin Jesus. You know I'm serious when Jesus is mentioned. This was like a breath of fresh air. Seriously. There were pieces of citrus in there, like little bites of a citrus orchard. Is that a thing? Well it is now. And hello, they had me at Pocky sticks. I had some hot green tea with dessert because I have a tooth that started acting up and it worked like a charm, on top of being one of the best damn green tea I've tasted so far (as in, in my life).

Service was great. Our waiter was super friendly. So much so that I felt like we should have gotten his number so that we could hang out later. He explained everything to us and we wrote our order on that piece of paper. You can have extra eggs, extra green onions, you choose your broth, you choose your entree, you choose your meat, and your dessert.

They have a tiny menu, but that only means I'll have to go back to taste all of it.


Hey, there do you know one big secret 1 cup of matcha tea is = 10 of green tea.
Because of this, people are choosing to enjoy the healthful benefits and
wonderfully fresh flavor of Japanese Matcha tea.. More secrets here
https://www.cupofmatcha.com