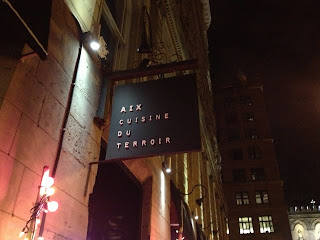 Ah yes, the Happening Gourmand is upon us again (www.happeninggourmand.com)! Last year, we went to Verses and this year, we decided to try an all new restaurant in the old port: Aix Cuisine du terroir, or Aix for the regulars. Let me reiterate what this Happening is all about: 6 restaurants (Vieux Port steakhouse, Restaurant Modavie, Taverne Gaspar, Méchant Boeuf, Suite 701, Bevo Bar + Pizzeria) have 23$ table d'hôte instead of the regular 36$ and 2 restaurants (Verses, Aix Cuisine du terroir) have a 27$ or 37$ table d'hôte instead of 44$. About half of them also offer a table d'hôte for lunch at 15$ (22$ usually). This, from the 10th of January to the 3rd of February. Basically, this gives us poor-ish people a chance to eat a great meal at a lower price :) We liked our experience last year and we love the concept so we decided to do it again this year! This time, instead of going with a bunch of people (and risking that some will be late![lots of swearing ensued]), we went with one friend and we had a great time!

Aix is located in the Place d'Armes hôtel, right below Suite 701. Actually, the latter was also part of the Happening but Aix's menu looked more appetizing. It's a 5 minute walk from the metro so it is quite well located indeed!The restaurant is very nice and chic, with banquettes everywhere, brick walls (we love love love that!) and big lamps, 60's style. I kind of had the feeling I was entering a Mad Men episode :)The ambiance was very nice at the beginning what with people talking and the clinging of glasses (but then a: the couple beside us started fighting and b: a loud group came in).

Anyhoot, our friend was already waiting for us so we sat down quickly. On top of it... at 7:45, the resto wasn't even half full. A very professional waiter arrived at our table right after we sat down. The way the Happening Gourmand works is that you have either 3 or 4 choices of appetizers and entrées and one desert. We had some questions about the menu and he was able to answer all of them. This is nice because sometimes you get waiters that don't know their menu. This pisses me off. WHAT? I'm a difficult client :)

We had had the chance of looking at the menu online before and we had chosen what we wanted so the ordering was quite quick. We shared a bottle of white between us three. I had the bison carpaccio and the beef medallion (served with swiss chard, shiitake, dried fruits, mashed parsnips---yum and porto sauce). Ze wife had the vegetarian poutine and the salmon steak (served with shrimp bisque, butternut squash pearls and herb chiffonade) and ze friend had the smoked bacon parmentier (soup), spinach and l'Île-aux-grues cheddar  and the salmon as well.

The bread arrived with our appetizers and I kind of expected it to be warm but alas.... :( The waiter served us wine the right way (well, the right way is of course the way they do it at ITHQ... duh :)... but seriously, I mean he asked who wanted to taste it, and after, served the others before that person got more wine. Also, he did not turn the bottle while opening it. That is key. Why? Because it looks better damn it! So koodos to him! Oh, what was also ITHQ-like is that they brought us the right utensiles before every course. THAT's nice. It's nice not to have 18 utensiles on your table at first, you know?

Let's talk about food, shall we? Let me just mention that I was lucky enough to pick the best things on the menu (which will explain my score, later).My appetizer was darn good, if I may say so myself (and the two other girls at my table said so too!)! Very thin slices of bison accompanied with jerusalem artichokes' chips, beet sprouts, parmesan shavings and apple jelly. Ah man. It's rare that I'm THIS satisfied with my food and this was gooo-hoood! The mix of flavors was perfect. Every bite was good. I must say I was perfectly amazed! Ze wife's veg poutine was good too, very original I must say. In it, there was polenta, leeks, caramelized onions, pepper sauce and cheese curds. The mix was a weird one, I must say, but it kind of grew on you. Ze wife liked it but I don't know... it remained a bit of a 'weird special poutine'. Another thing was that the polenta itself could have been crispier according to her. Ze friend's soup was good but a tad watery... which always sucks when you order soup.I must say though that the smoked flavour from the bacon came out really well and was delicious. 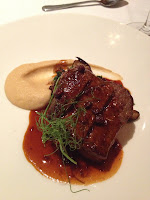 As for the main, well I have nothing bad to say about mine. Only good. First of all, all the plates were beautiful. The different colours and textures were there and our eyes were more than pleased! My beef was cooked just the way I like it, semi-rare. I'm not even exaggerating when I say it melted in my mouth. The parsnip puree was so smooth and very well seasoned, the mushrooms and the sauce were a great addition to the plate and the little green deco on top was lovely. Lovely! 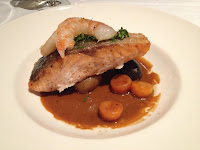 Ze wife and ze friend's meal was enjoyed but not as much. It had a shrimp on top of the salmon and it was a tad plastic-y :( Also, the skin was still on and it was quite soggy so that was a tad unpleasant. Ze wife said that if they are going to keep the skin on, might as well make it crispy. Ze friend's fish had many bones still in there which was rather uncool (on the other hand, ze wife's had none). Don't get me wrong here, they liked their salmon very much, they just didn't like it as much as I LOVED my beef. 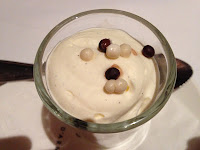 As for the desert, there was only one choice... so no choice :p It was basically cream and cookie and tiny chocolate balls in a verrine. Tasted very nice but obviously, it was nothing special. But that's ok. It wasn't overly sweet either so that's good sometimes and ze friend liked it like that:) It was a nice, simple desert. We didn't go there for desert!


Without tip, it cost me 45$ for my meal and 1/3 of a bottle of wine. Not too shabby for such a good, very much appreciated meal!

The service was amazing at first. AMAZING. The waiter was very present and he answered all of our questions. But then, nothing. No more waiter. He did not serve the wine again, or the water. The only other time we got some water was at the end of our meal by a busboy. And I was the designated wine girl during the meal. He also did not come by (not even once) to ask us how our meal was. That's just common courtesy! Sheesh!

So, for the (much awaited) scores:

Service: I would say an average of 7 overall because our waiter was not nearly as present as we wanted him to be.

All in all, such a great foodie experience, especially for me! You have to try the Happening Gourmand... it is well worth it! You still have time, it ends feb 3rd.