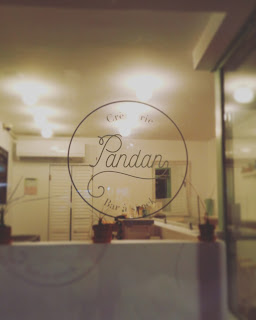 I had tried Crèmerie Pandan this summer and fell in love with their Thai rolled ice cream. Like, legit fell in love. Like, I looked at it longingly while I ate it at an incredible speed. But enough about my love story with ice cream. Madhuri, the owner AND daughter of one of my friends, Nantha (who does wonderful cooking things in Montreal) invited me to try her new menu that comprises of Malaysian treats. Malaysian you say? Treats you say? Oh, I am IN!

She added a little counter in the tiny TINY restaurant, which makes for a way better eating spot than the curb, haha! Last summer, I had gone to try that loverly ice cream and they didn't have a counter nor a bench outside so I sat on a curb, looking homeless. Ah, the good ol' days! Now, it's pimped with a nice counter with seats that are not high enough for me, hahaha. Damn it! I hate being short in these situations!! I ate half on, half off. At least I was able to put my food on an actual surface.

She put up a very small menu on a big board. Hey, I prefer smaller menus any day of the week! Those menus with 86 choices are the bane of my existence! 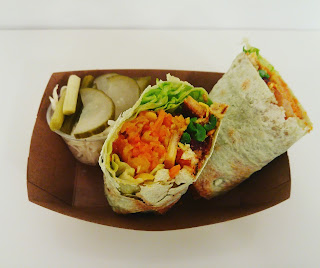 I had the all-dressed Popiah wrap. Basically, it is THIS: pandan (plant used to heighten flavours in many dishes) infused wrap, lettuce, house sauce, house sambal, braised jimaca+carrot, blanched green beans, bean sprouts, fried shallots, toasted peanut dust and omelette strips. Since I had the all-dressed one, I also had some grilled prawns, Chinese sausage and crispy fried tofu. I think that's it, hahaha! It was full, but well wrapped. It was also accompanied by marinated veggies: cucumber, cabbage and garlic shoots! I loves me a good garlic shoot! These were quite intense tho. Whoa!!! Madhuri said that next time she'll most likely cook them before to take a bit of that, what's the word?, garlic-ness out. The wrap was not heavy, as a lot can be with all that bread. The good thing about THIS wrap was that it was ubs thin and ubs UN-heavy. Or light as one would say. It's actually called a skin. THAT's how thin it is! It's made out of wheat flour and made into somewhat of a crepe, if you will. You can read all about it HERE: https://en.wikipedia.org/wiki/Popiah When everything is homemade, it makes a hell of a difference. A HELL of a difference! On top of it, she was using recipes from her mom AND grand-mother. It felt so personal, which was lovely! As soon as I had my first bite, I was hooked. Like, you know, on a drug. A drug called Popiah! That was a bad joke and I am very, VERY sorry. An explosion of flavours hit my taste buds. The ONLY not 100% good thing (does that even make sense?) was the sausage. I found it a tad on the hard side. But that'll be all! 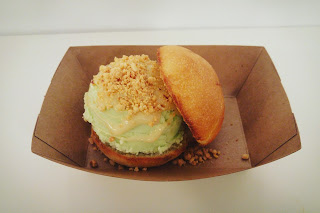 The Pok Pok! OR pandan ice cream, milk bread bun, peanuts and condensed milk. That little homemade (yes, I told you that EVERYTHING was homemade) bread was great! Albeit a tiny bit on the hard side, it was a great alternative to the usual cookie. The ice cream was ubs fresh and supes tasty! The peanuts added a nice little crunch that countered the ice cream and, hello, condensed milk. I was pretty much drooling as she was pouring it all over the dessert. Rrrrrrraaaaa. This was quite the winner.

Service was great. Duh. It was one-on-one as no one else was in there. We talked about how she came to open the resto, about her recipes and about her family. Water was in a pitcher on the counter, so that was perf. She made the food in front of me whilst telling me what she was doing, so that was amazeballs.

Can't wait to go back! Either for a great wrap OR for that out-of-this-world rolled ice cream!