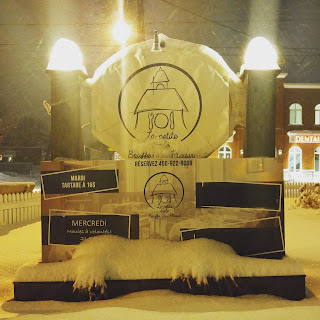 Last week, I was invited to try La Petite École in Ste-Julie. That's correct, Ste-freaking-Julie. Argh. I looked on Google maps and it would've taken me 1 hour and a half by bus. WHAAAAT? No. it's a good thing I was going with Clo, who actually owns a car. And so, we chose last Wednesday. Yep, we chose the day when Montreal was awaiting 15 cm of snow. Bravo Marie. Bravo. 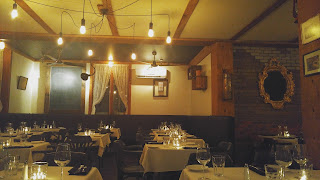 The place itself is located in an old OLD school, with a lot of it having been kept as it was in the old days. You know, those old days? Ya, those. It was very cozy! The only thing missing was a nice fire! The waiter told us that they get a lot of local products made by local businesses: Boucherie Auclair for meat, Pâtisserie B & G for desserts, etc. Now, THAT is cool and right up my alley! We should always encourage our local businesses before goin' international!

We decided on two entrées and two mains. Obviously, sharing was going to be involved! 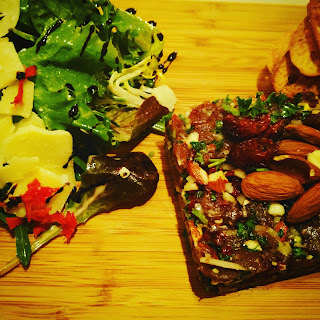 The kangaroo tartar. Who sees kangaroo on menus anymore? No one, that's who. It has a stronger and more present flavor than, let's say, beef, and it was ubs pleasant in a tartar form. The meat was supes tender and with those cranberries and almonds in there, WOW!! Perfect combo. There was also a nice little salad made out of my enemy (you know, mesclun). In its defense (yes, I speak for lettuce now), it was ubs fresh and unwilted (I'm making it a word) and it was great with a bit of kangaroo in there. 'Yes I'd like some roo in ma lettuce please'. 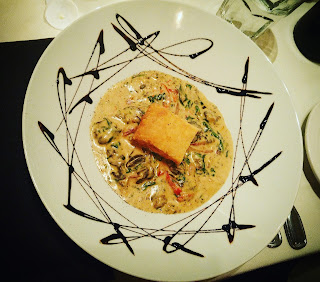 The escargots. I loves me some good escargots! They were literally swimming in a cream sauce with some basil and sun dried tomatoes. YUM-MY! There was also a piece of puff pastry in the middle of the plate that absorbed all that goodness! Just imagine: a little dip of bread (and the waiter warned us we were going to ask for more!) in the cream sauce AND in the balsamic reduction, with an escargot on top! DAMN! I was in heaven. In snail heaven, that is. I must note that Clo wasn't too cray cray about dem snails; she found that it was too creamy. I gotta say that my lactose intolerance flared up in the hours following that meal but, when it's worth it, it's worth it damn it! 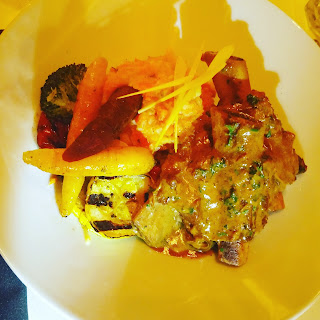 The veal spareribs. Ah, meat! I'm basically full-on vegetarian now, eating lots of chick peas, lentils, tofu and veggies. All that healthy crap. Hahaha! It can get boring. This is why I always get totes excited to eat a good piece o' meat :) Mmmmmmm meat! You know what I like more than meat? Supes tender meat. Oh yeah! The meat legit fell off the bone only by looking at it. There was also a purée of carrot and parsnip that was supes tasty and seasoned just right. The sauce was made out of Griffon Rousse so it was obviously a good one! 'You don't like beer', you'll say. No I do NOT. But beer dson't taste like beer when it's in sauce form. And this one was very good and paired very well with the meat! This was a big ass portion (technical term), that Clo nor I could finish. The chef mentioned that he tried doing the small Montreal-like portions and peeps did not appreciate. I guess the south shore-rers like their big portions. I mean, they must work on farms and need more energy, yes? Haha! 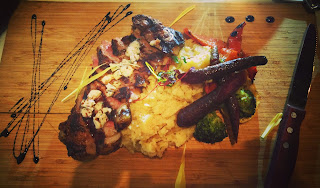 Steak, aged 40 days, with shallot butter and a red wine sauce. Clo was hesitant at the thought of eating (and me ordering) this dish because she had tasted aged meat before and did not like it. I obviously had asked for my steak to be rare because, let's face it, when it comes to steak, it is the ONLY way to eat it. I've legit unfriended people for ordering a well cooked steak. Shame on you! Shame on aaaaall of you!. OK, imma calm down. The meat was nothing like Clo remembered it: not tough at all and quite juicy. It was perfectly rare and the shallot butter completed the flavors. The parsnip puree was very tasty but I would've liked it to be smoother. The veggies were well charred. I just LOVE that taste! It's the best way to eat veggies, fo serious. 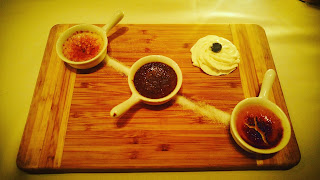 Le dessert. Crème brûlée trio: chocolate, vanilla, and Cointreau. To be honest, we were quite full by then, but we HAD to taste what they had to offer! Our fave was the Cointreau one, with its notes of citrus. It didn't seem as heavy. The vanilla and chocolate were good, don't get me wrong, but the Cointreau one was right smackedi smack on da ball! They made this in house while they get the other yummy looking dessert from a local Pâtisserie.

Service was greatness throughout the evening. The waiter explained everything that was on the ardoise and our water glasses were refilled. He explained to us the story of the actual building and how the restaurant came to be. At some point, between our entrée and main, we both felt like it was taking a tad too long and that someone could maybe perhaps clear our table, but that was the only "bad" part of the evening.

I would looove to say I'd go back, but damn iz so far!!! My south shore friends should DEF go though!!! Go. NOW!