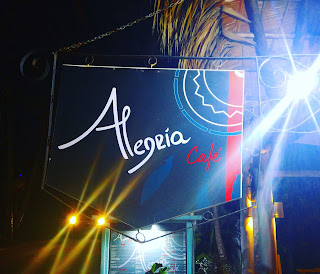 The first night Boo and I were in Samanà, Dominican Republic, we walked down from our bed and breakfast to Punta Popy, a picturesque beach. Can I go back now please? Mmmmthanks! There's a line up of restos right on the other side of the beach, overlooking it, and it is just SO UGLY to look at. Or, you know, the opposite. We were looking for a drink at first so we headed to Alegria. And then we beached it up and came back for dinner! 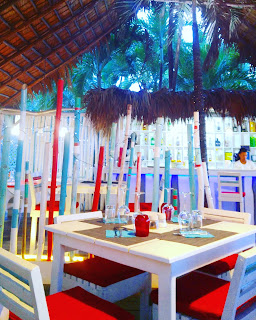 The place is the cutest thang ever: all white with some red and light blue, and palm tree leaves as a roof. A very waterproof roof. We were actually sitting in the common area of our bed and breakfast while it was pouring and we were in awe. Imagine two girls looking up at the roof, with our mouths wide open. We sat at a counter facing the water. Argh, that view SUCKED. Or, you know, was the best thing ever. 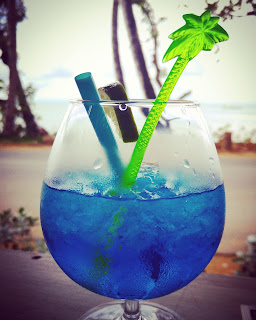 We both had what we could only describe as "the blue drink". Actually, it was called "Aquarium". It was quite intense! And it was such a huge drink. Oh, I ain't complaining :p It was fuuuull of alcohol too. Again, not complaining! Blue Curacaô, rhum, tequila, Martini and sugar. Having a drink in front of the beach and the palm trees is pretty much THE dream. That sh*t never gets old.
We were tipsy and ready to hit the beach! So we walked about 20 steps hahaha!!! Had a little swim, played with a stray dog, and went back to Alegria for dinner! 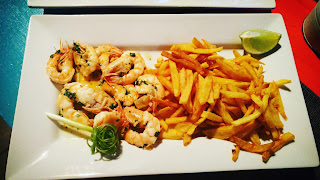 We shared dishes, of course. I had the parsley and garlic shrimp (duh!). The shrimp were cooked just perf and were so freaking tasty!!! Mmmm... gaaaarlic shrimp :) :) If you want to make me happy, gimme some garlic shrimp. Enter Homer Simpson drooling sound. The fries were OK, really not the best. I obviously did not order this for the fries. 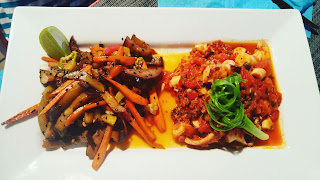 Boo had the octopus in a creole sauce with some veggies. The veggies were perfectly cooked: not too soft nor too hard, but quite salty. There was plenty of octopus in there. It was perf and ubs taste! Those creole spices went really well in there. For a dish that cost a bit less than the equivalent of 20 $CAD, it was oh so worth it. It was on the salty side of things though. Like a lot. Like so much that we wondered why we had salt on the table. We also wondered if they simply had taken the water from the sea and cooked with it. Seriously. Don't get me wrong, it was good, but whhhaaayyyy too salty!

Service was awesome throughout the meal. Actually, pretty much everywhere we went to eat in Samanà had damn good service. They were attentive, they asked us if we liked it, they refilled our water. Kidding. We did NOT drink the water. Actually, I must have swallowed some whilst brushing my teeth, because I got the, well, let's just say I was ubs sick for a good week after returning to Montreal.