There are more and more food delivery services in Montreal: Uber, Foodora, Just Eat, À la Carte Express, and the new kid on the block, Wizrd. I was contacted by email because I'm, like, a super freaking great and popular blogger. Hahaha, just kiiiidding! But seriously, I guess I do have some kind of reputation, being one of the number ones in Montreal. Ugh, I wish I could say THE number one (I'm tied with Montreal Food Divas).
Anyhoot, I had to choose a restaurant to get food delivered from. This was hard. Why? Because I have about 100 restaurants on my go-to list. I decided on Tri Express, having heard that it was one of the best sushi in Montreal (I still maintain that it's Furusato on Parc).
The way it works is that you text 1-855-659-4973 with what chou want from where you want (seriously) and when you want it. They answer you in less than 1 minute, I swear. They ask you what they can bring you, and then you say I would like 1 miiiiillion dollars. OK, that's what I thought about saying. But I'm special. You send them items from the menu and then they ask you to sign up online with your name, address, and credit card number. It was just not working but the Wizrd dude totes got on it and fixed it within 5 minutes. I felt like this was awesome service (and no, they didn't pay me to say this 😊). I asked for a delivery at 7h30pm. They text you when they pick it up so you know it's on the way. The -pretty freaking hot- dude arrived at 7h25pm. Great timing. He gave me the food and said ok thanks bebye. They charged my credit card and so no need for tip or what have you (trust me, I tried). The delivery and the food goes straight to yo card. BAM. BOOYA. All in all, a great delivery experience. I'm not one to get delivery, like ever, but if I feel the need for it, I'll totally be calling Wizrd.
The resto: Tri Express is located in Le Plateau, right at the limit (or a bit passed) the delivery territory for my apartment. As afore mentioned, I had been meaning to try this place for a whhhile. I ordered Omakase I, a combo that includes 4 nigiri and 10 maki, the syake maki (salmon--and YES, I'm fluent in Japanese) and the scallop and grapefruit salad. 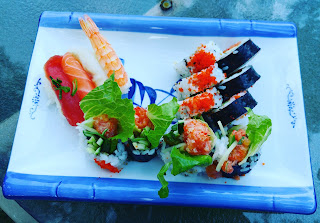 Let's begin with the Omakase. The nigiri were all super fresh, as if the chef had just gone on a boat and fished them out of the ocean. They literally melted in my mouth. My mouth appreciates the melting. Mmmm, melting. OK, no more melting talk. The maki were also very fresh tasting but I found that salmon was a bit too present. Don't get me wrong, I loves me some salmon in ma sushi, but this was salmon + salmon + salmon. One the rolls had asparagus in there which was bang on what I like but it was so small, we couldn't even taste it. I also found that there was a bit too much tempura in there. There was another roll with apple, which is another LOVE for me, but it was not that well rolled, and so the pieces were comin' right out. Not a fan of super tight rolls but definitely not a fan of super loose rolls either. 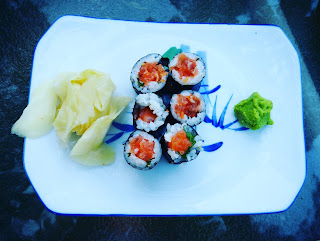 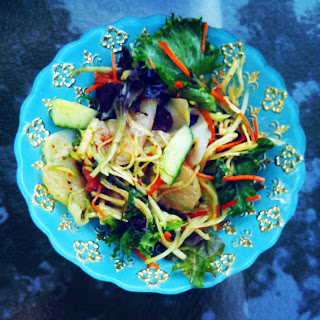 The scallop and grapefruit salad. I ordered this because a: I loves me a good scallop, b: I loves me a good grapefruit and c: hello, what a combo! The grapefruit was very nice in this green salad. It was very fresh! The enoki were perfect and the wakame was... wakame. Ugh. I always ALWAYS forget to say NO WAKAME when I order Japanese food. I just do NOT like that texture. Just can't dso it. The scallops were very good but few and far between and they were cut in half but not totally. How weird. The salad was on the bitter side o things but putting the Tri Express sauce on it saved it a bit. 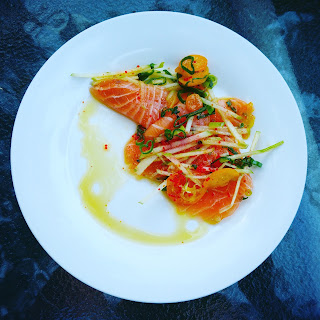 Gravlax with apple and kumquat. The salmon was perfectly gravlaxed (new word alert!) and the kumquat gave such a nice punch of flavor! The apple, I could've done without. This was sent as an extra! I love not paying for food!

Since I got this delivered, I can only say good things about Wizrd. On top of it, they are Montreal based, open from 5pm to 2am (hello, students!) AND they deliver from ANYWHERE. Literally. Check them out here: https://wizrd.me/ Oh, and by the by, they also deliver advil for your headache, maxi pads for that time of the month, shampoo because you forgot to buy some and, well, EVERYTHING.

I had heard AMAZING things about Tri Sushi. It was good, yes, but not nearly as amazing as I've heard.