A couple weeks ago, I was heading to Toronto right after work. I decided that I deserved to buy myself some lunch. You see, I always either have a salad full of protein or meat/fish and veggies. It was pig-out time. I loves me a good Lebanese. Let me be clearer: I ain't being dirty or anything, I'm talkin' about the great food. Sheesh!

Farrouj is part of (or should I say 'THE') the food court in Galéries du Parc, right under my place of work, in the Transat building. OK, there are about 5 restaurants, but after speaking to some colleagues, Farrouj remains the best one. 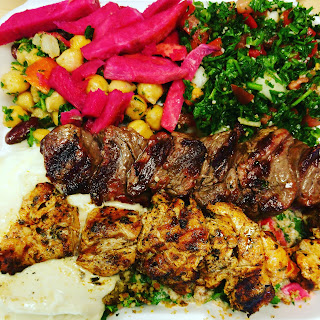 I had a HUGE plate. It was a tad expensive at 16$ but hey, I don't buy Lebanese food every day! A girl can only dream! Let's begin, shall we? The taboule was right ON except for one thing: peppers. Who in their right mind puts peppers in taboule. WHO? I need names. The rest was SO nice and lemony and taboule-y (ya, it's a thing). Just take the peppers out. Thank you for your cooperation. Hummus was good but a bit on the pasty side and not seasoned enough. The garlic sauce was... effin garlicky. Wow! No vampires for me tonight OR I'd say for 2 or 3 nights. Ya, it was THAT strong. Some would have found it whhhhay too much, but for me, it was just perf. The chicken was, for a lack of a better word, perfection. Remember, in Friends, when Chandler is stuck in an ATM vestibule with Jill Goodacre and he says that gum would be perfection? No? Well, I DO. And this juicy, perfectly grilled, seasoned just right chicken WAS perfection. The beef wasn't as good and it was a bit on the dry side. The pieces were too big to put in ma mouth and it was annoying to bite into them. The falafel salad, I had never seen before. Lots of spices in there made it very tasty but the sesame sauce they drizzled (major understatement) on top made it soggy. The chickpea salad seemed a bit old but it wasn't that bad so, I mean, imagine if it would've been fresh!

Service was good. It took a while to get ma shtuff because they were cooking the meat but that just means it was that much better and fresher!

I'll go back if I have a craving for Lebanese OR if, let's say, I forget my lunch!