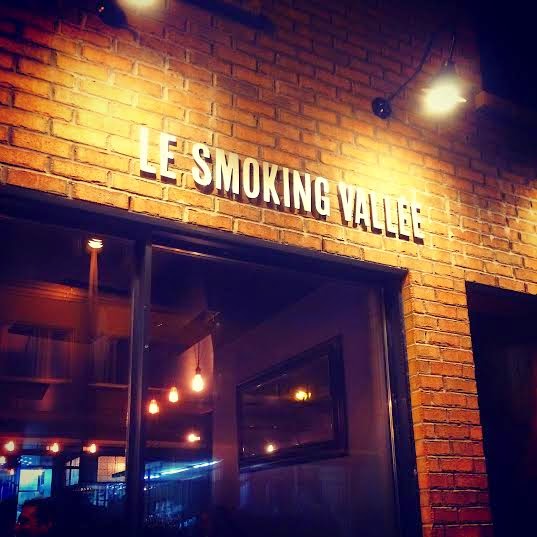 I have wonderful friends. Two of them (Lea and her main squeeze) decided to invite me out on February 15th for a little Valentine's day dinner. How nice! And to Le Smoking Vallée no less; a BYOW restaurant I'd been meaning to visit for a while. 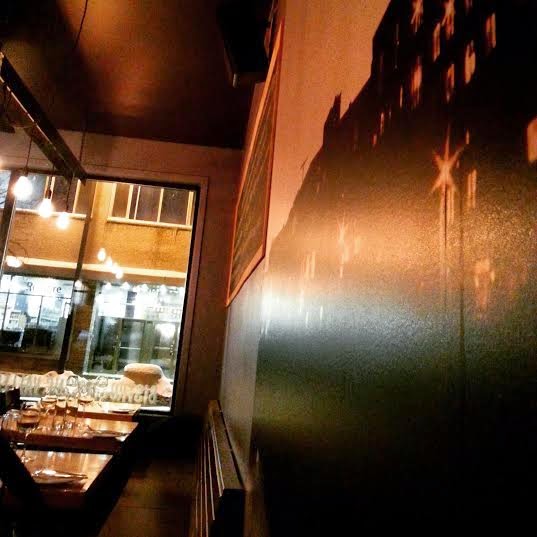 The place is very simple, lots of wood, mirrors, industrial type lighting (recurrent theme recently), no music (a tad whhhheird), and a 'menu à l'ardoise', meaning of course that the menu was written on a black board on the wall.

Our cute little waitress came and explained all the specials. She actually needed a piece of paper where she had them written all down and I don't blame her! I think there were about 5 or 6 specials that evening! I stuck to the menu, which I had thoroughly studied on their website. That's right, when I go to school, f*ck studying, but when I go to the restaurant, it is time to learn the menu, learn about the place and know what I should order in advance. OK, that 'f*ck school' isn't true, I mean I did graduate :) 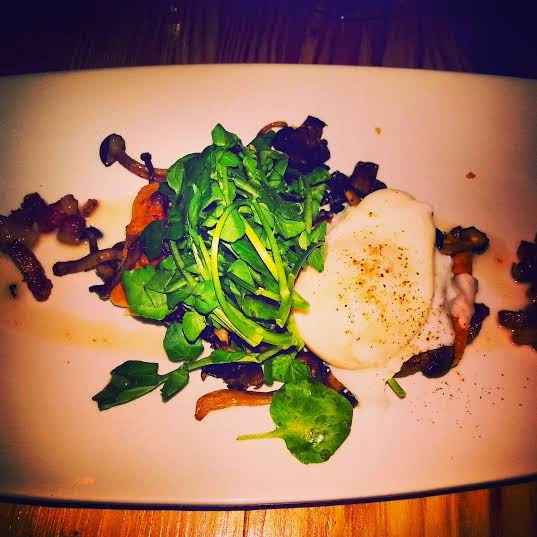 As soon as this plate was in front of me, I started drooling. And then it became a puddle of drool on my table and it was just not classy. Alright, I'm kidding. But it could have happened! Puff pastry with enoki (to be honest, I'm not sure they were enoki because the head was a tad bigger, but I looked it up and I just cannot find a description) and button mushrooms, truffle, watercress and a poached egg. Let me just say that if I'd only be rating this dish, I'd give it a ten. A ten I tells ya! The puff pastry was super flaky, just like it should be, the mushrooms were juicy and full of flavor, the egg...OH the egg. I broke it and the yolk ran over everything and created the best sauce EVA! Holy bejesus. So silky, creamy, soft and unctuous! It was literally one of the best poached eggs I've had in my life (and we all know how old I am ;p ). The watercress added a great texture and another taste level to the dish and the bacon...OH, the bacon. Y'all know how I feel about bacon :) 'Nuff said. 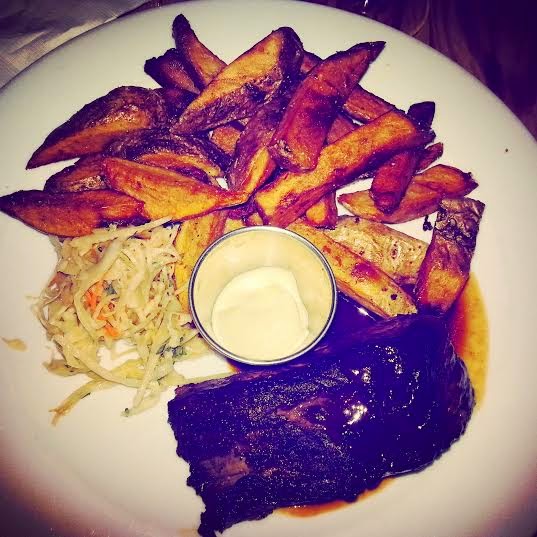 My reaction to this plate was pretty much the opposite to the first one. Aight SO I had asked for the meat to be rare. It was rare alright... nope.... actually it was blue. For y'all who dson't know, blue is a notch above raw. I don't like my meat raw. I like some fish raw. But not freaking beef. (And I'm too shy apparently to tell the waitress...but I've thought about it...and I will next time instead of looking at my plate in disbelief). I used to eat it 'well cooked' until I discovered the beautiful world of rare. Flank steak (bavette) can get chewy if not done well and damn, f*ck, it did get chewy. I pretty much ate around the middle and left the raw part for the waitress. What they describe on the menu as marinated veggies is actually coleslaw. That's fine. With just a touch of vinegar, it was actually quite enjoyable and balanced well with the other elements on the plate. The potatoes were perfect: crunchy on the outside, smooth on the inside and well seasoned. The mayo tasted like there was a bit of wasabi in there. The hint of spice was very welcomed. 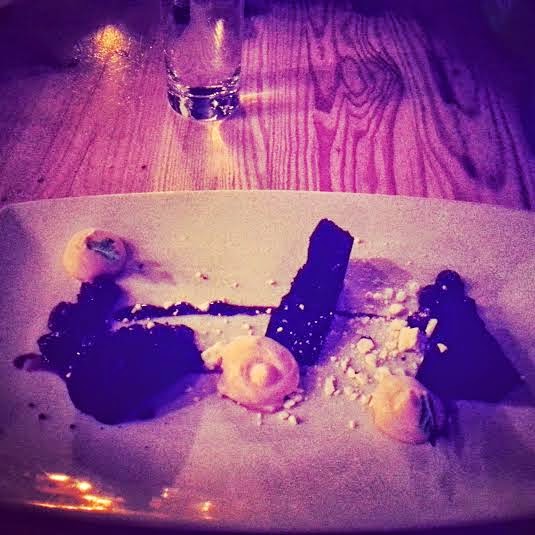 Brownies with some caramel whipped cream. Whipped cream you say? You had me at 'whhhh' :) The brownie itself was a bit dry and un-fluffy, the caramel chantilly type cream was wonderful and was like a perfect girlfriend to the chocolate. All in all, it was a bit underwhelming but still OK nonetheless.
The service was.... uneven. Good welcome but then it kind of faded into oblivion. But forget about the service; the people watching was wonderful that evening. Lea and I had the better view... of people fighting, laughing, exhibiting most of their boobs (for me, of course) and then when we started singing the Star Wars song, everyone turned around... duh. Why again were we doing that? OH, because I brought TWO bottles of wine to the party :) Anyway, sad thing is that I believe one of the couples may have broken up during their Valentine's day dinner. Happens every year.

I'll go back fosho but y'all know what now? I now speak/write with a Southern accent. Hehehe, no but seriously, I won't have the bavette, oh and if I do, I'll say it if it's blue. Mmmmmthank you.