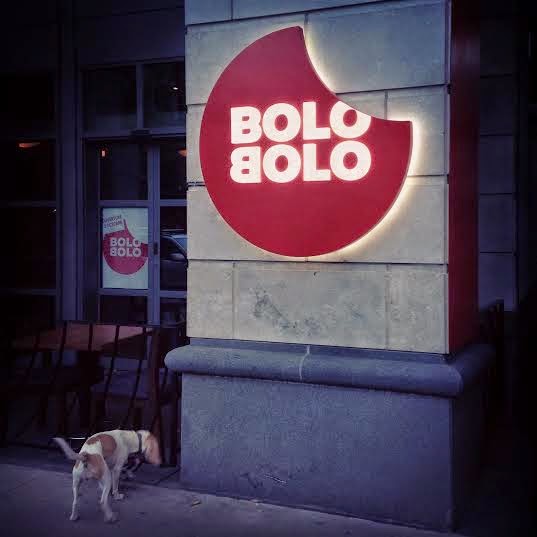 *review written by my friend C.S. because I could not attend the opening*

My sister and I are first-time critics of restaurants and had the great honour of representing M-C and her fabulous blog for Bolobolo’s opening night in early October. We entered the gourmet meatball (boulettes gourmandes) restaurant/bar with keen and empty stomachs. Located on the Boulevard Saint-Laurent in the space adjacent to the Excentris theatre (in the old Café Méliès: an ambitious location?!), we imagine that Bolobolo is looking to attract movie theater goers and late night snack-seekers.

As we entered the bar, we were pleasantly greeted and offered free cocktails--- in exchange for posting Bolobolo’s hashtags to Instagram, Facebook, or Twitter. We took advantage of this early on in the evening and ordered a few of their “signature drinks”: the “Sweet Mexico” (spicy and aromatic, with fun chilies rimming the glass), “Hocus Pocus” (very yummy with a giant mint leaf), and the “Smoking Hot Bloody with a Ball” (Bloody Mary + boulette).  All great drinks, particularly the one with the meatball!  We enjoyed our fun free drinks as the night began, but it wasn’t long before things at the bar got out of control.  Free drinks = total chaos in no time at all, we found out. The most obvious issue was that there weren’t nearly enough staff to accommodate all the drink orders.

As hunger was setting in, we were promised over and over that the boulettes would be making their grand entrance at 7pm. There really were a lot of people so I didn't get too worried when it was 7:10 and I hadn't yet seen anything closely resembling a meaty sphere rolling my way. A few minutes later though, we noticed the intermittent and fleeting rushes of people around the back of the restaurant, which we assumed to be in the vicinity of the doors to the kitchen (we were right). Okay, okay, I get it: the first few trays were quickly attacked and we just had to be a little patient until they brought out some more food. Soooo, um, yeah, bring out some more, please! Right? Weeellll, didn’t quite go that way: they had about two or three wait staff bringing out a paltry 5-10 tiny 2-boulette bowls at a time from the kitchen. It took over half an hour for us to get our first bites. We did our very best to make ourselves visible, but things did not improve as the night went on. I understand that they had a lot of people there, but heck, you invited them all so ya better feed 'em, no?

Of course, this was an opening night event and, though we are but rookies of the food critiquing business, we understand that these things are probably not logistically super simple. Though we really hated having to try so hard and compete against so many people to finally get some food, we get that it’s not necessarily indicative of what service would be like on any other night. We did eventually, finally manage to get some food and were in fact quite pleased with what was served. First to sink our teeth into: a classic beef meatball with tomato sauce. Good, but our least favorite, just a little dense.  The next boulette we managed to get our paws on was the spicy veal ball. A nice touch was the parmesan cream/foam served along with it, which went well with the sauce and spice. Next to arrive were the delectable mac + cheese balls, which we happily tucked into. Not impressive from the outside, but a very nice snack: not heart-cloggingly fried, lightly breaded and super cheesy, with a nice kick (good dose of cheddar). 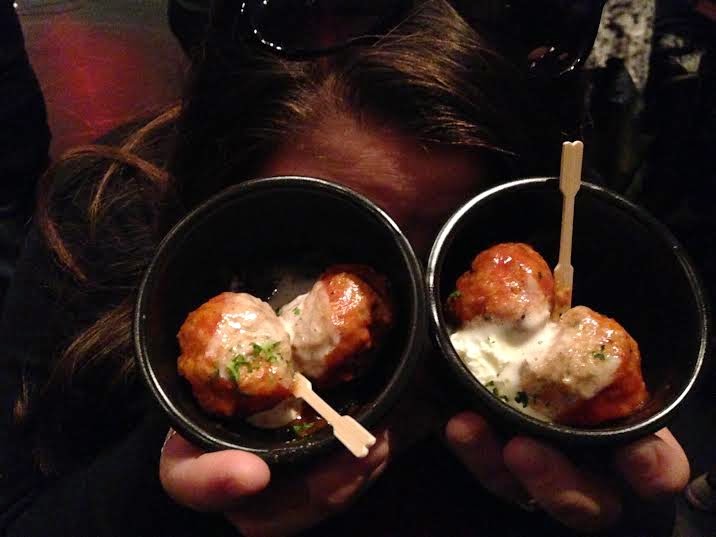 Another yummy meat-a-ball we tried was pork boulette served with a good amount of ricotta and a tasty sauce. This was the juiciest ball we had (aside from the one the came with the Bloody Mary) and we agreed that we would certainly order this dish again.

Overall, to get your meatball fix, this place is a fair to good bet, based on what we sampled. We didn't get any of their “plats principaux” (described as “pizza” and “sandwich” boulettes, amongst others), so we can't speak to those. The restaurant also offers some basic sides and desserts. In truth, food-wise, you’re really here for the meatballs, which you can order in quantities of up to 20. It’s comfort food done up all fancy, and we figure you might come here for 5-à-7 or a pre-/post-movie bite and cocktail. It may also be fun for late night drinking munchies (it’s open until 4am Thursday through Saturday, and until 11pm on other nights).

Note from me: I wish I could have been there! MUST go try these meatballs... and soon!

Would you like to come back and try the experience again? It's on me ;-)

hey thanks! I would LOVE to! Send me a message at https://www.facebook.com/EatingOutInMontreal :)