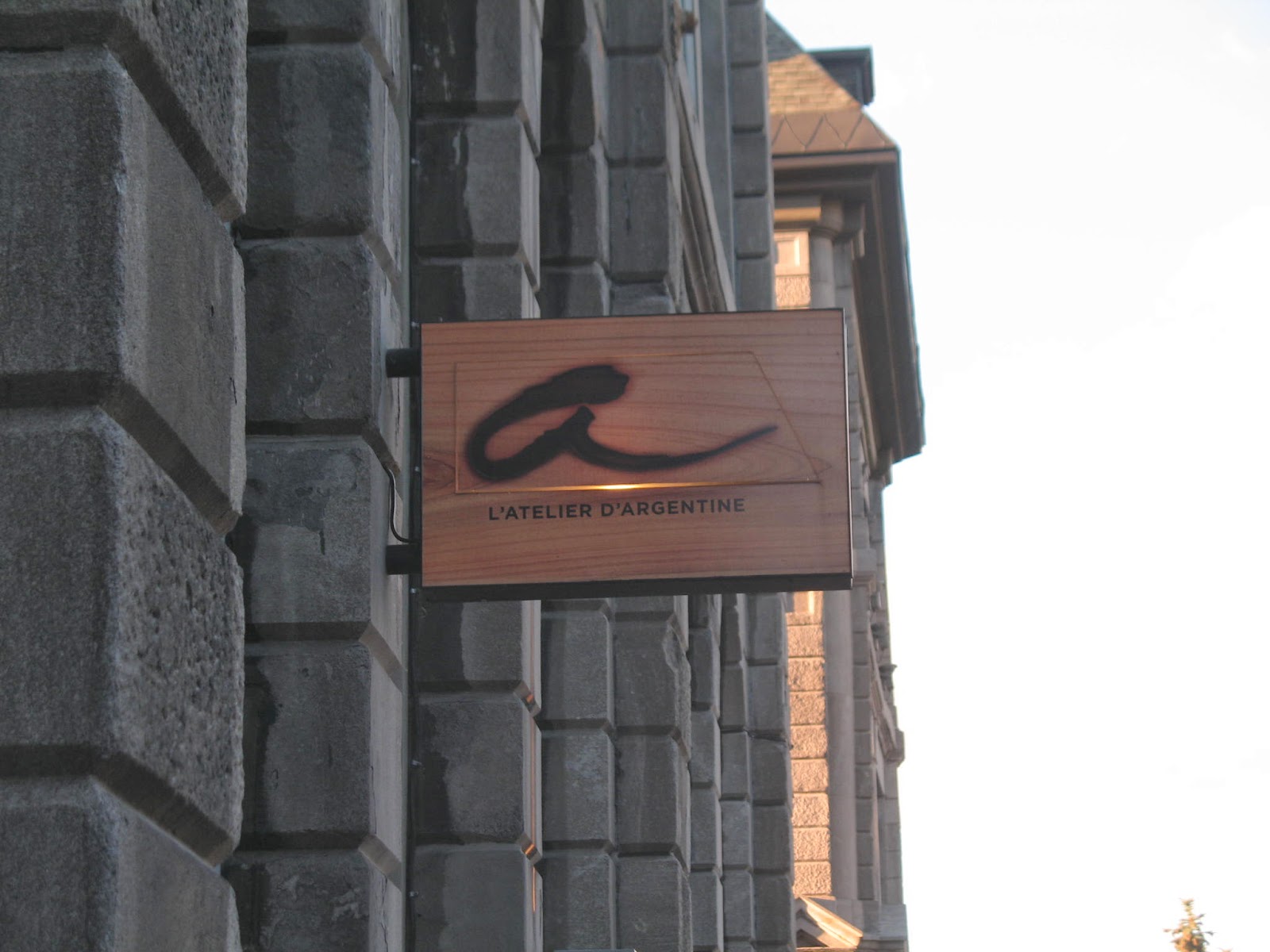 I got invited to try out the new brunch menu of L'Atelier d'Argentine that started at the beginning of April. I LOVE getting invited because it means two things: you get served like you're a superstar AND it's free! Well, I mean, free but I always leave a good 20-25% tip to make up for it.

L'Atelier d'Argentine is a pretty freaking huge restaurant with two rooms: one that is more dinner-y and one more brunch-lunch-y. The first one has darker tones and the latter has more light coming in. This restaurant has a great view of the Old Port, located just a hop and a skip from de La Commune. And the atmosphere is just so nice with people talking and, hum hum, drinking over brunch!

We were welcomed very warmly by the hostess and it was nice to see that when she saw who I was (well, wellll), she had a huge smile on her face and took our jackets. We were seated and at first I gotta say I was a bit disapointed in the fact that the maïtre d' was around but didn't come and say hi. Well, I'm just a little winy princess, aren't I? Fak. He came to say hi like 5 minutes later and he was very nice and charming and said he remembered where I was sitting when I was invited last time. He also said that everything was on the house; food AND drinks. Did you say drinks? Ah yes, ah yes he dsid :p 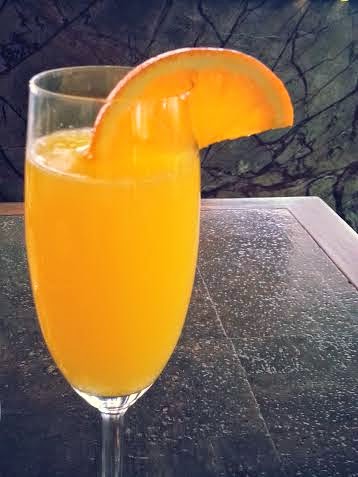 I started off with a nice mimosa :) I mean, what,s a real breakfast without a mimosa? It was just what a mimosa should be: sparkly orange goodness. It could have been a tad colder though. Note: you can have an infinite amount of mimosas for 26$/person!! What the what now? 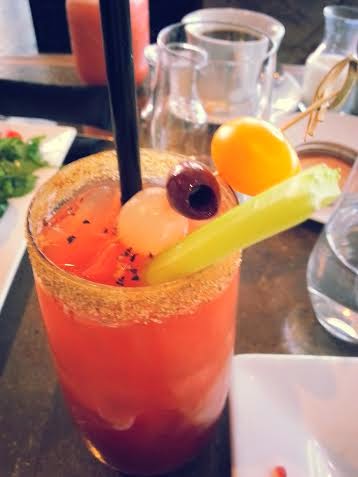 Then, we both had the bloody Mary (inifinite amount for 19$/person)! What's o-so-cool is that there's the 'bloody Mary bar' where you can make your own with all these veggies and sauces and shiz! Just my type of thing! And oh, it was good!!! 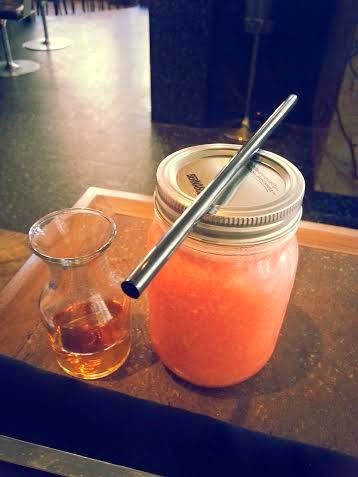 Lea had somewhat of a fruit punch-y thang with rum. Hallo! It was really good and as per usual when you drink alcohol with fruit juice, it did not taste like alcohol therefore very dangerous!

So throughout the meal, I drank 2 mimosas (second drink was supposed to be a bloody Mary but the maitre d'  brought me another mimosa instead and when I told him I had asked for a bloody Mary, he said OK, well just keep that one too). 1 bloody Mary and half of Lea's fruit punch. Needless to say it was a happy brunch :) 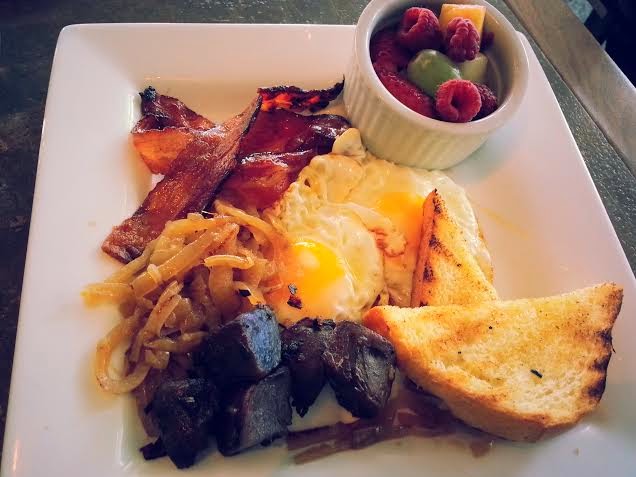 I had meself the huevos fritos. I mean, come on, they had me at bacon! Basically, it was baaaacon, caramelized onions, eggs, purple potatoes (nice!) and sweet tasting toast. OH, and fruit. But, let's face it, when you have all of that, who cares about fruit? Ok well,bacon was yummy crispy goodness and so darn tootin' tasty! Oh goodness, thinking back, I want more, like NOW! The bread had a bit of sweetness to it which actually paired really well with the rest of the dish. The potatoes were great and well cooked but not TOO cooked (but lacked a bit of seasoning). The eggs were well seasoned: I hate it when I have to add seasoning to my eggs! The onions were just a great addition, with their sweet yet not so sweet taste! Basically, amazing. 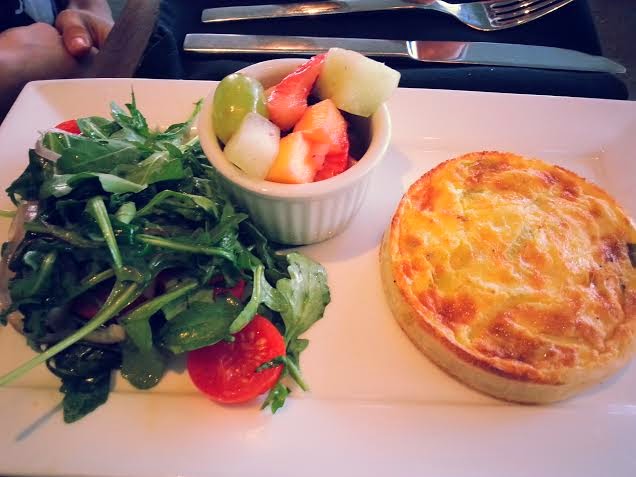 Lea had the leeks and goat cheese quiche with a cherry tomato and arugula salad. Great also. I had a bite of the quiche and although it could have been warmer, it was still marvelous and pretty much melted in your mouth.

Ps: both our plates were only 12$ so it's really affordable and I like that too! 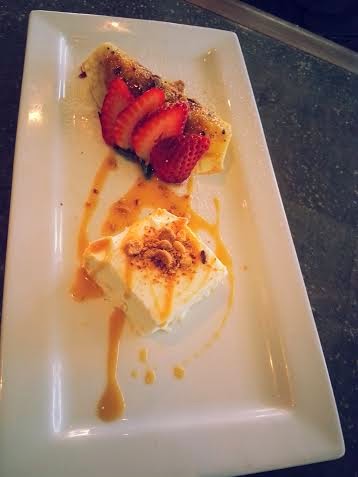 We were persuaded to eat a desert. Holy bejesus, I was so full on food and alcohol but hey! We had the dulce de leche crepe with milk semifreddo. Holy cow was that semifreddo great! It was gosh darn succulent! It melted in your mouth with all of its goodness! And the crepe too! It was very chic and only 9$! Does it seem like I'm astounded by their prices? Well, I AM!

Service was excellent, of course! The waiter was there to give us water, to ask if we had questions, to give us our food and our drinks (VERY important!). He was very professional and that's what I like in a waiter!

All in all, another great experience at L'Atelier d'Argentine!!! If you have 15 to 20$ to spend on an excellent brunch, PLEASE go there!!!