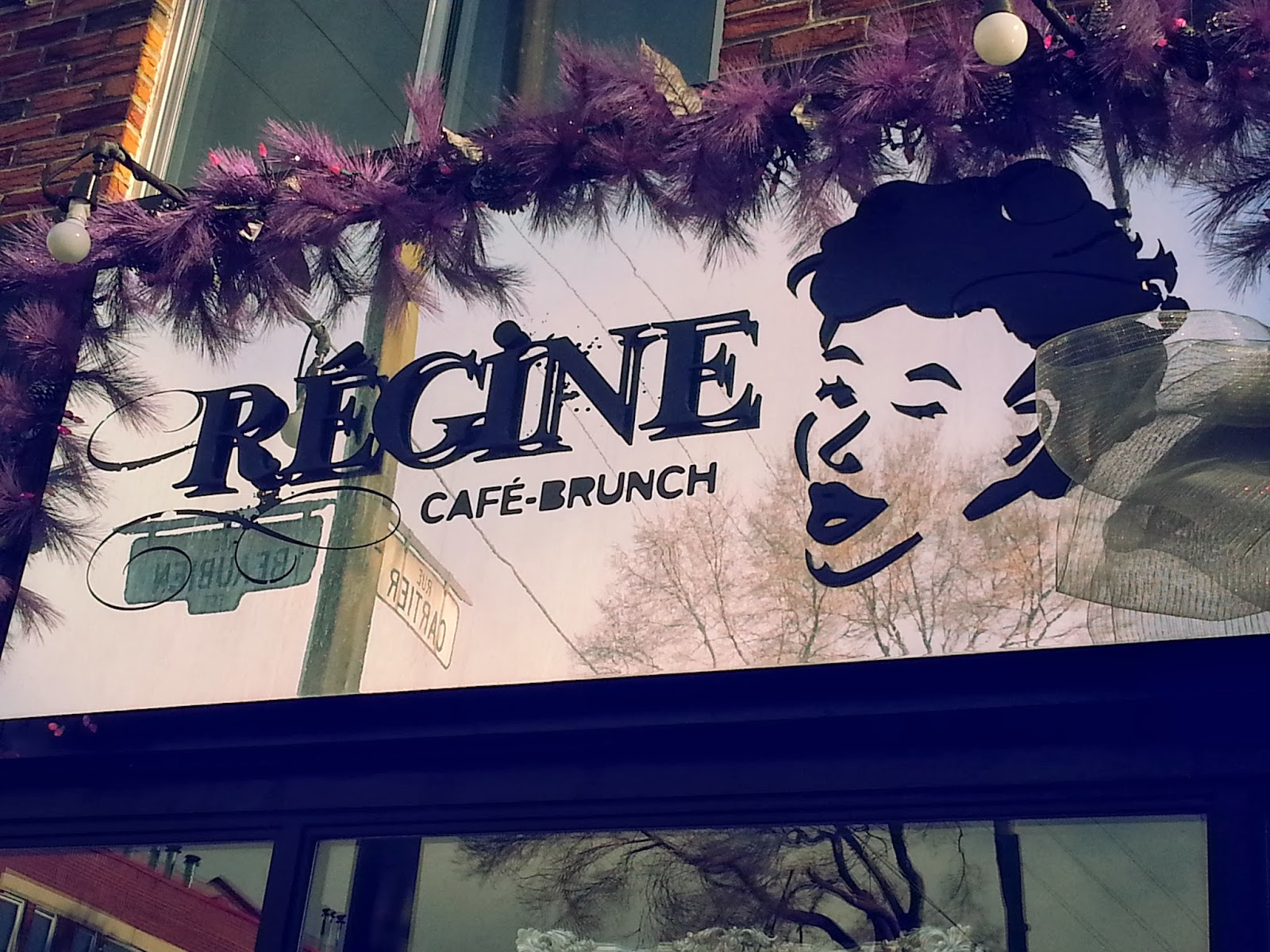 I'd been meaning to go to this resto for a while. Well, I don't like giving in to all the hype, but gosh darn it, I gave in! And it was worth it! Last, minute, I asked my cousin and her husband to join me and with 2 hours notice, they said yes :) yay!

Located on ever developing Beaubien Street, Chez Régine is right at the corner of Papineau. And you can see the line-up from afar! Good thing is that even with a line-up, it took us 10 minutes to get a table! Twas quite funny actually, the hostess comes outside and notices that she hadn't taken our name yet and then she looks at us, asks us for how many, we say three and she looks again: 'come right in!'. OH YES!!! I thought she was going to tell us it was going to be another 10-15-20 minutes! 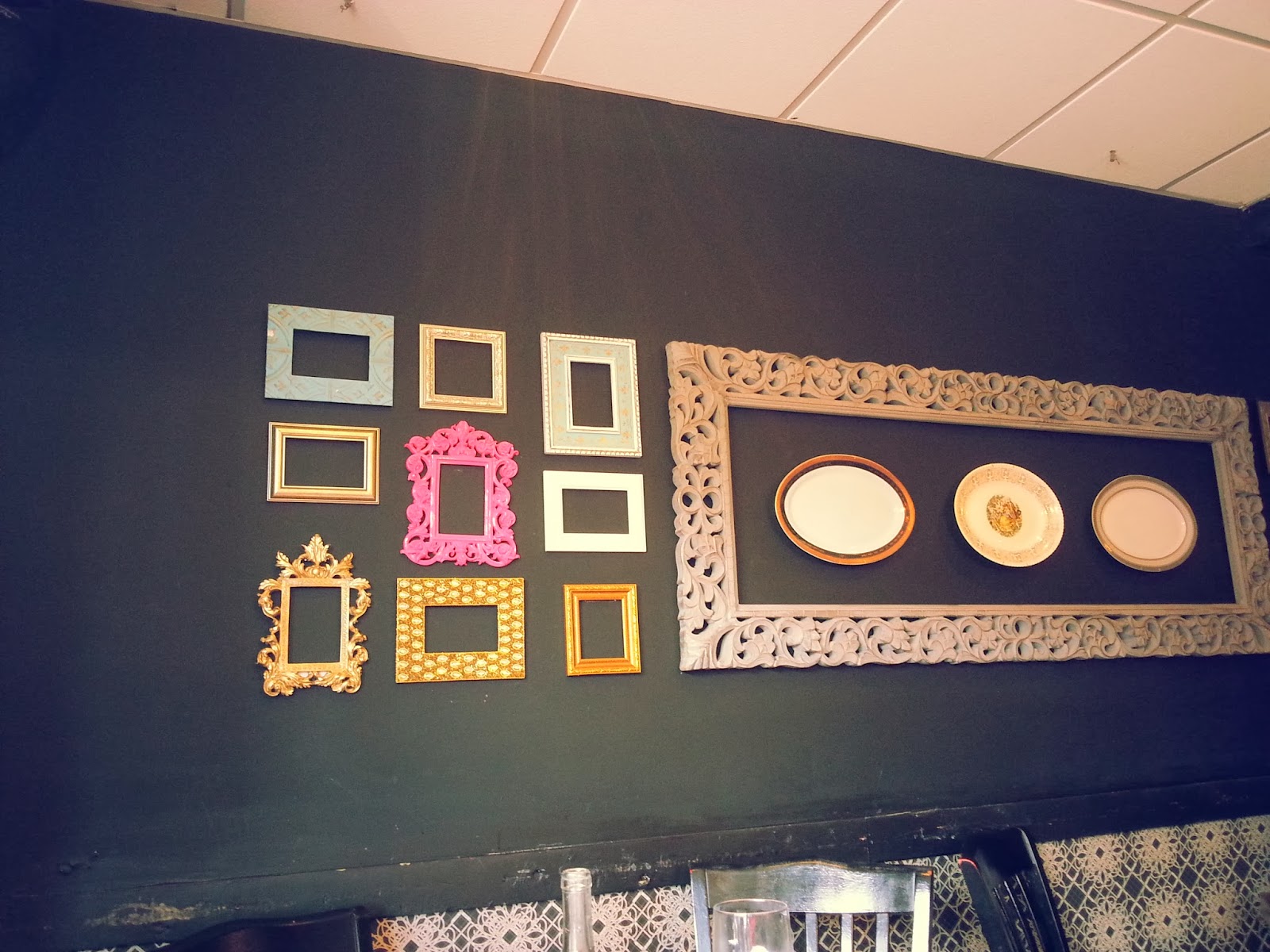 The place is so darn cute: mirrors everywhere, kind of 20's style with big comfy chairs and a huge bar right when you come in. It has two rooms, so there's no saying how many it can sit.. all I know is that it was full and it's been like this for months! 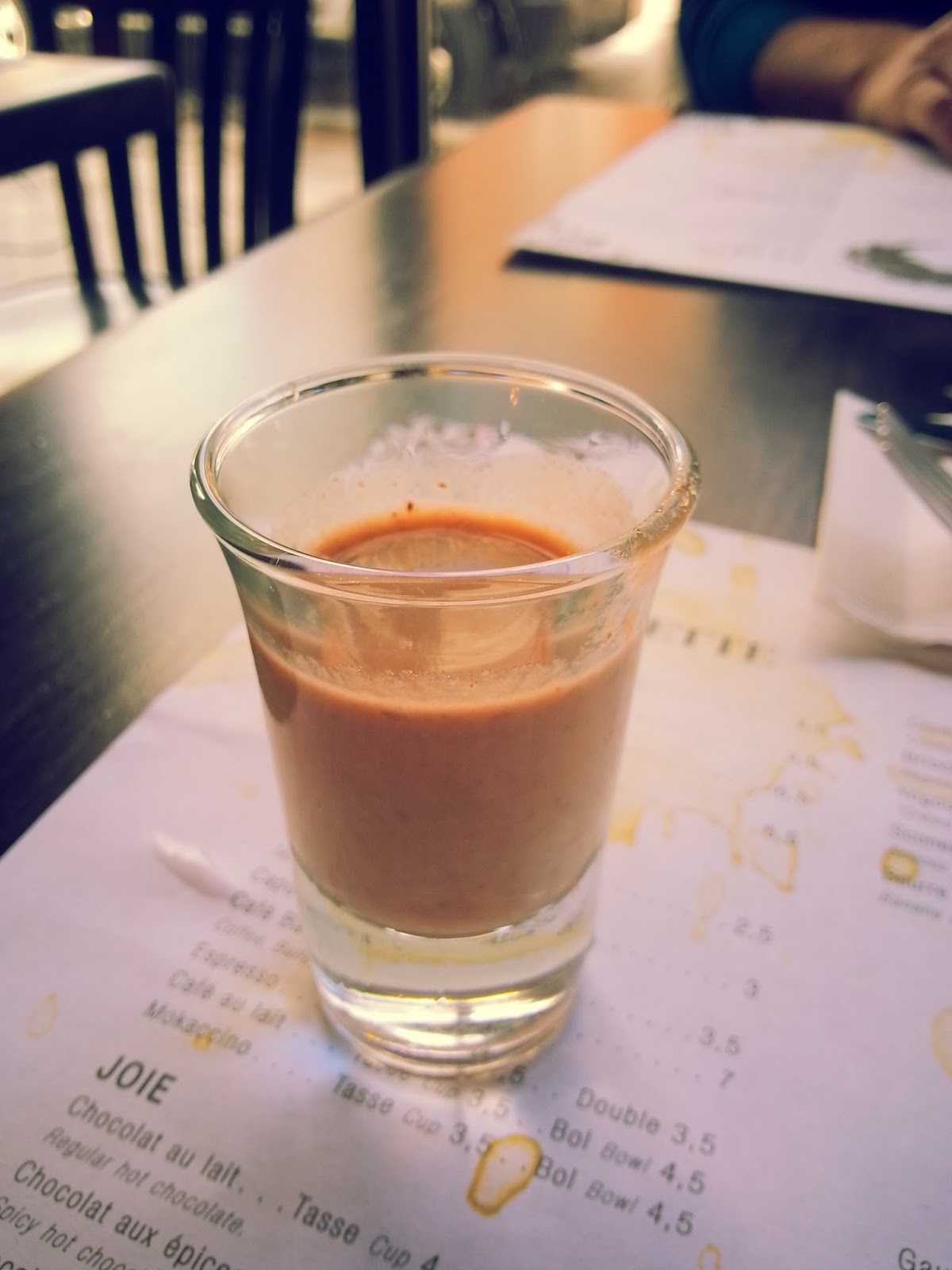 First off, our waiter served us a shot of chocolate, banana and cinammon. Although there were little pieces (banana) in there, it was a nice touch!

We decided to each choose something different so we could all eat off of each other's plates :) oh ya! 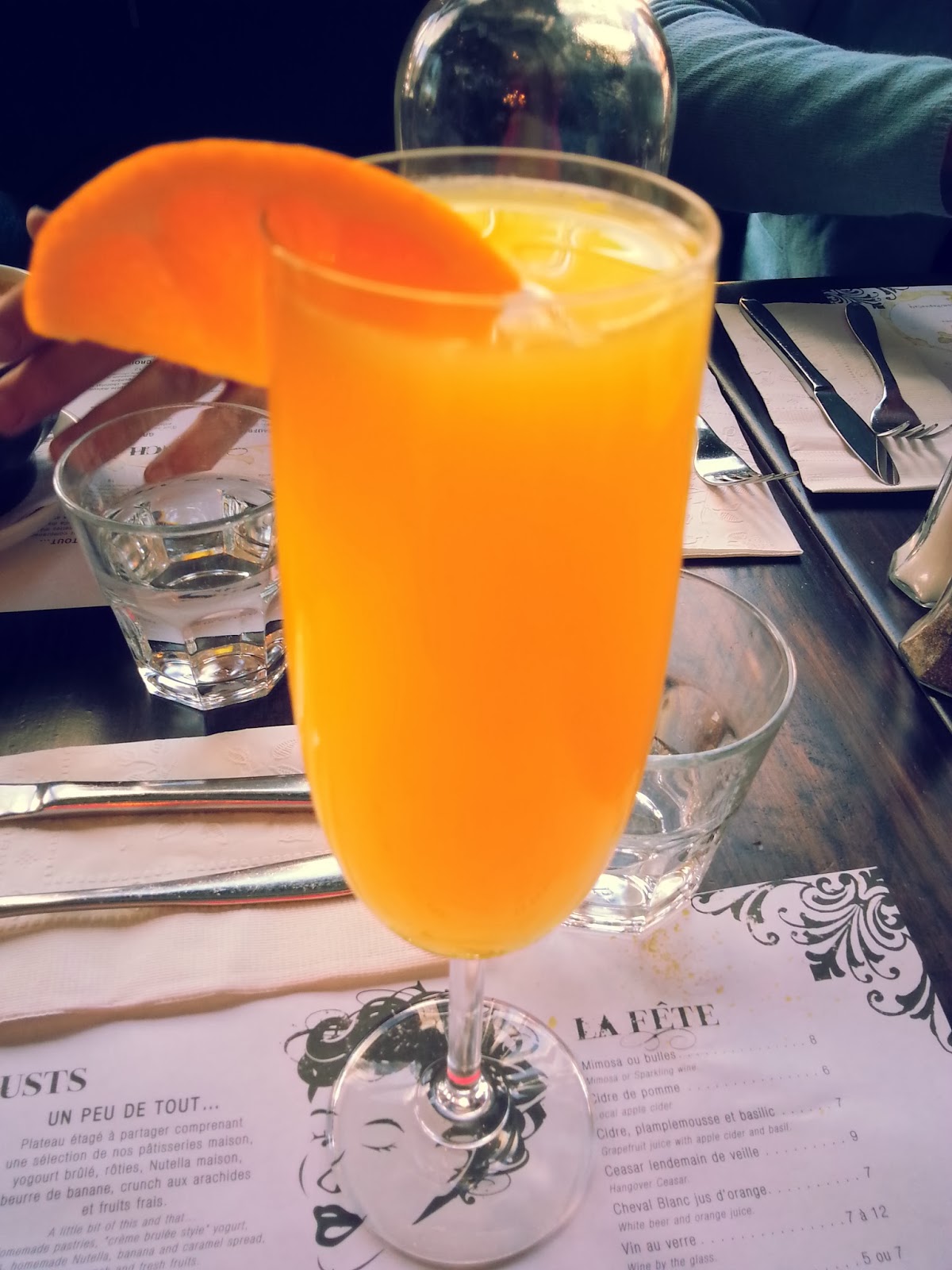 Of course, as soon as I saw 'mimosa' on the menu, I went for it! 8$ is a pretty decent price. It was good and bubbly but there wasn't enough alcohol in there. Is there ever? :p 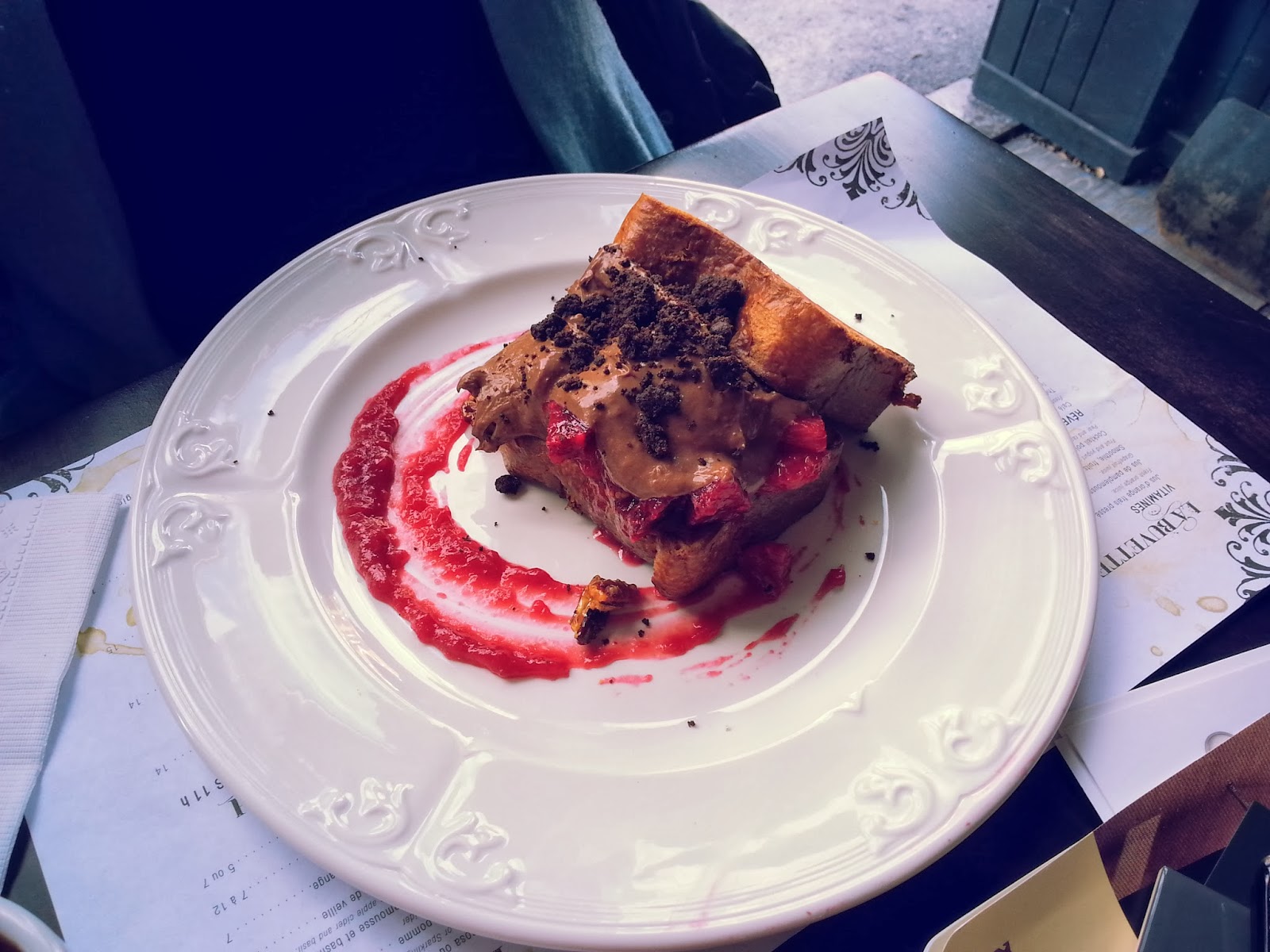 This was one of the specials of the day; my cousin's meal. It's very rare that I have a sweet breakfast and although this one was really good, I was happy I had ordered something else. It was very sweet, with a [great] overload of chocolate and bread that melted in your mouth. The raspberries and the coulis added just what was needed, taste wise. 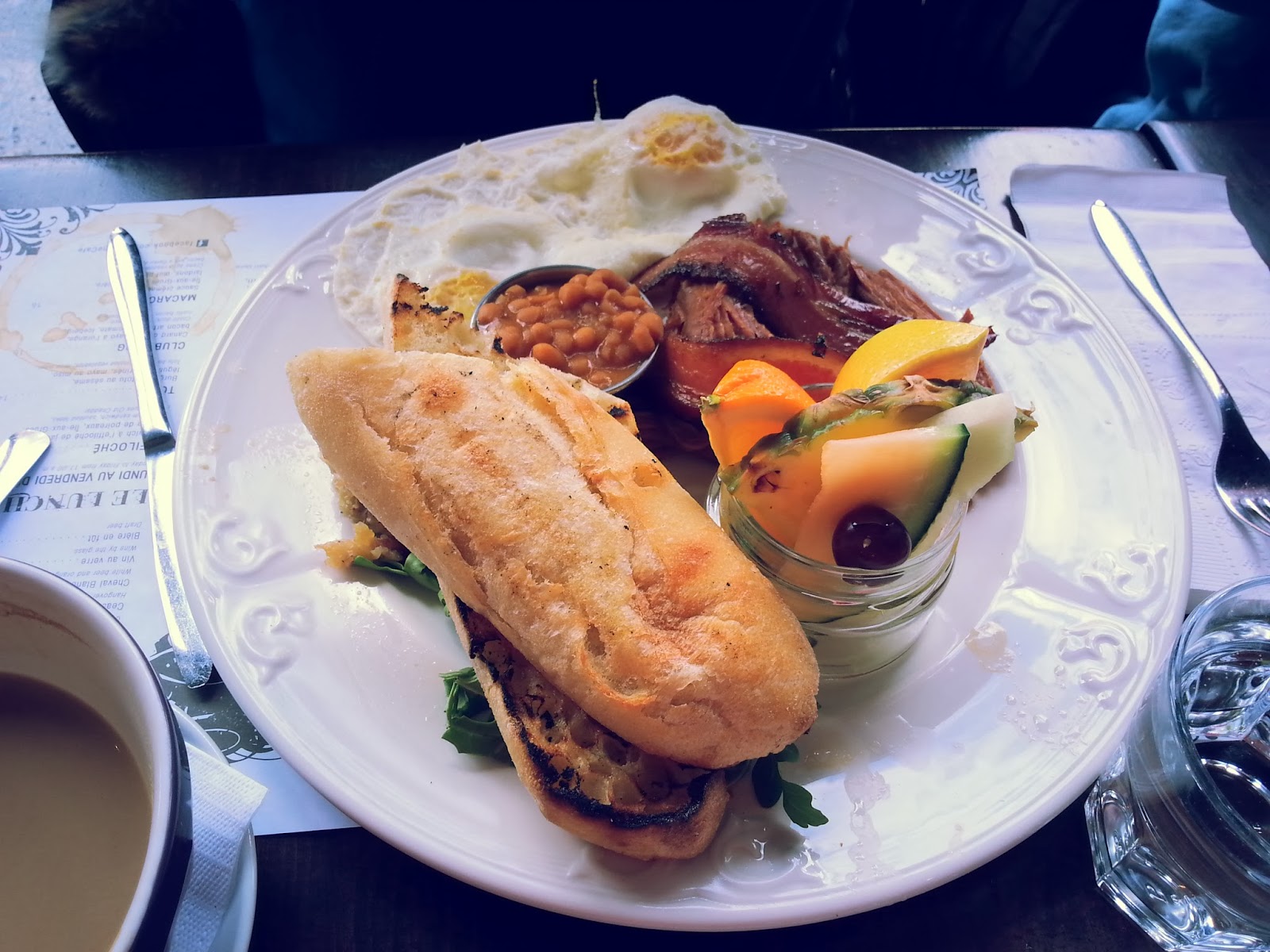 My cousin's husband had 'Le gros jambon'. So basically, pig, pig and more pig! Just my kind of breakfast! The ham was serious. Serious ham I tell you! It melted in your mouth. Man, that was pleasant ham! The cretons were soft and dsamn tasty... and I know my cretons! 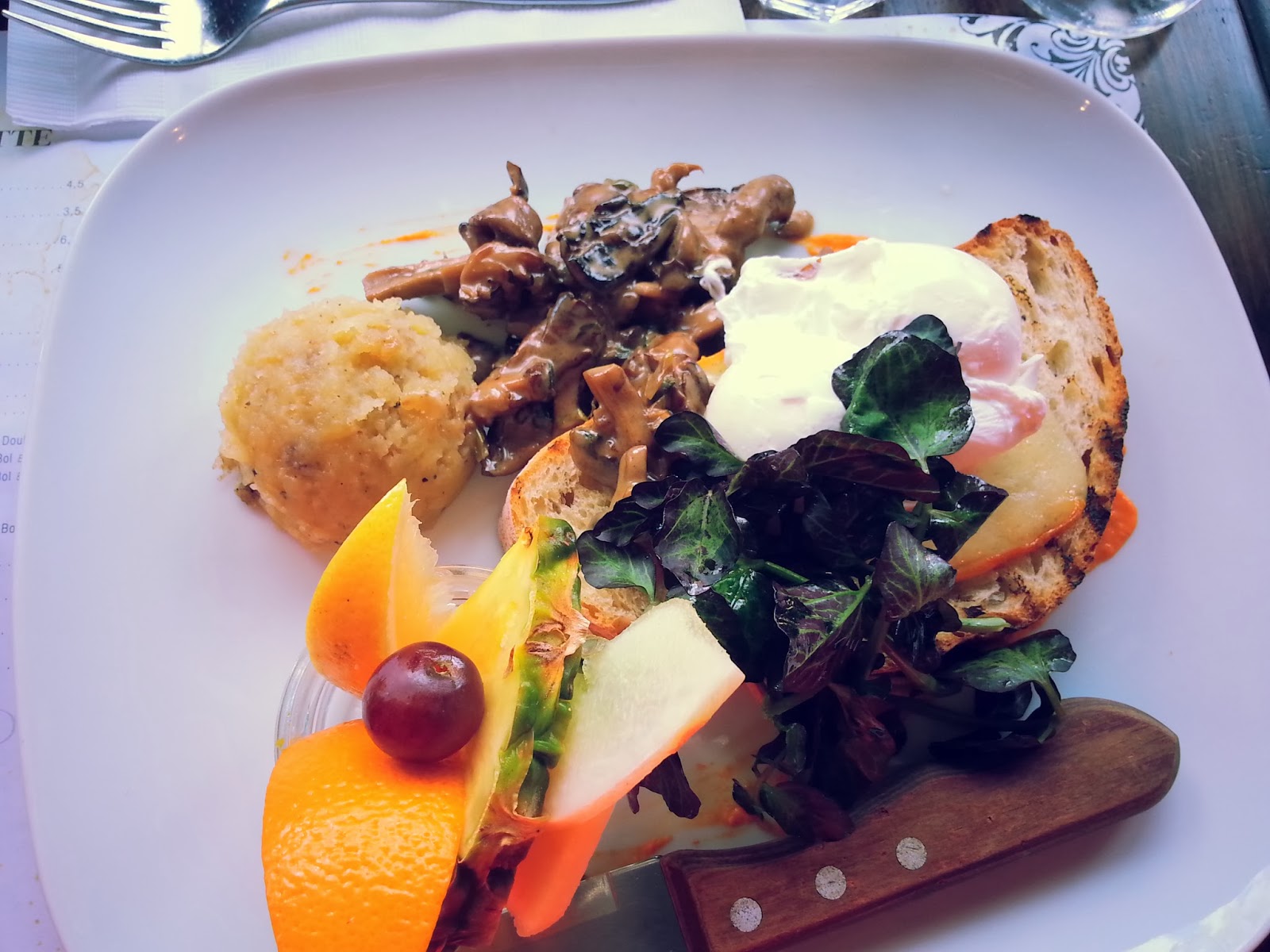 I had the Champi: poached egg, Le Mamirole cheese on rustic bread, mushrooms with sage, pepper compote. Oh and I had the extra bacon. Duh. It was darn tuttin' amazing or, as Penny from Happy Endings (love it) would say: AH-MAH-ZING! There was also watercress and somewhat of a potato ball with spices in there that was as amazing as the rest of the dish. The watercress was surprisingly pleasant... I never really eat it because it can be quite bitter but it fit in very well here. The mushrooms were mostly good but shittake mushrooms are meant to be cooked a bit longer and they were a tad squishy. The cheese was perfect and the whole thang was super. The bacon was thick and great. That's all I have to say: thick and great. The fruits were kind of an after thought to me... 'here's something healthy' kinda thing. Hahaha! 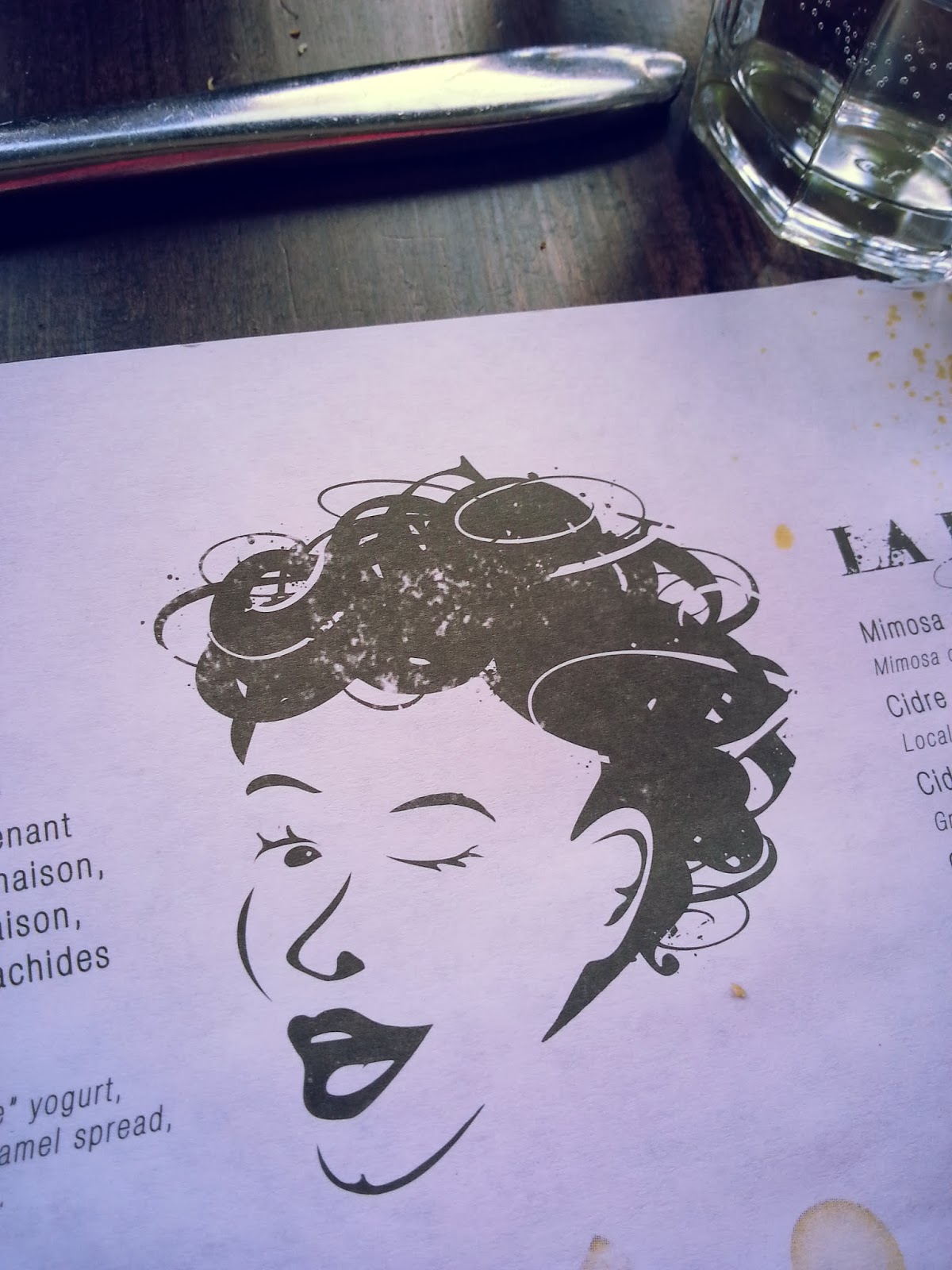 As for the service, it was good. I mean, our waiter didn't even use a notepad to get our order and I couldn't do that in 1000 years :p Plus, he came and checked if we were all good, which, as you know, I always appreciate! But, as we were talking scores, my cousin, her husband and I were thinking that, although service was good, it wasn't the BEST.

A great new find and I will for sure be going back to try something else on their menu.